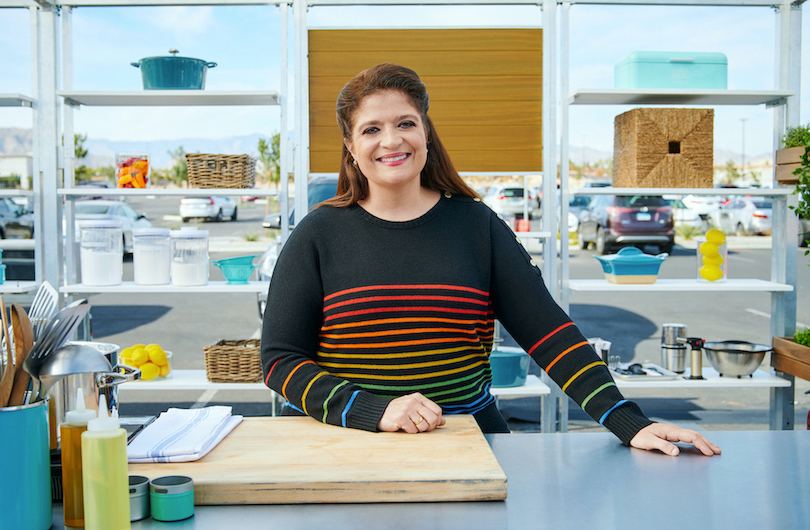 Premieres Tuesday, May 17, on Food Network

The action hits the aisles as “Supermarket Stakeout” returns for a new season, premiering Tuesday, May 17 (10 p.m. ET/PT), on Food Network. Hosted by Food Network staple Alex Guarnaschelli, each hour-long episode presents viewers with outdoor cooking battles where anything can happen, as four talented chefs persuade unsuspecting customers to sell their groceries as they attempt to turn the ingredients into themed culinary delights. A rotating panel of judges ultimately determines which competitor made the most successful menu over three rounds and is awarded a year’s worth of groceries.

In each episode, the four chefs face off in a state-of-the-art, pop-up kitchen outside a grocery store, with the competitors given a budget of $500 to use through three rounds. In the first stakeout heat, the chefs must negotiate with shoppers for their grocery bags, sight unseen, as they are challenged to create a themed meal for the judges. In the second heat, the three remaining chefs use the leftover money from their budget to ambush shoppers for their groceries. In this round, the chefs can see what's in each shopper’s bag, but they can only make one purchase. In the last round, the final two chefs can explore groceries from as many shoppers as they like, but they can only buy five items total in their bid to find the right ingredients for their dishes and walk away with the grand prize.

Viewers can also watch Guarnaschelli take on some of the toughest carts from prior seasons in “Supermarket Stakeout: What Would Alex Make?” with new episodes beginning Tuesday, May 31 (11 p.m.).

“Alex continues to shine across Food Network’s daytime and primetime programming. We are thrilled to bring new episodes of ‘Supermarket Stakeout’ to viewers that are full of signature ‘anything can happen' moments and unexpected challenges that fans have come to love,” said Courtney White, president, Food Network and streaming food content, Discovery Inc.

Guarnaschelli is a world-renowned chef who, after attending La Varenne Culinary School in Burgundy, France, began her international culinary journey training in Paris and New York with some of the world’s most acclaimed chefs (including Guy Savoy and Daniel Boulud). In 2003, Guarnaschelli was given the opportunity to expand her repertoire and become the executive chef at Butter, where she has since created her own eclectic American and green-market inspired menu. Guarnaschelli first appeared on Food Network in 2006 and has since been part of hundreds of episodes of programming on the network, including as a judge on “Chopped,” cohost of “The Kitchen,” and star of “Alex vs America.” She also hosts the award-winning digital series “Fix Me a Plate,” and is the author of the cookbooks “Old-School Comfort Food: The Way I Learned to Cook” (2013), “The Home Cook: Recipes to Know by Heart” (2017) and, most recently, “Cook With Me: 150 Recipes for the Home Cook” (2020).