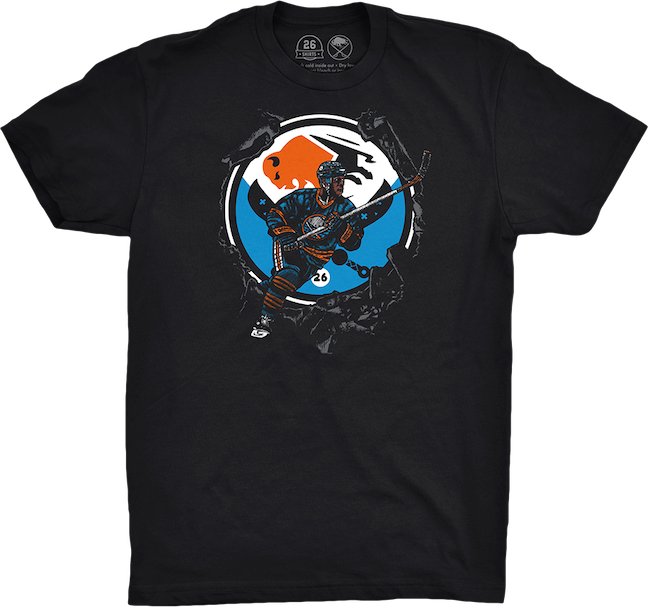 When Val James suited up for the Sabres for the first time in 1981, he became the first Black American to play in the NHL. Nov. 1 marked the 40th anniversary of James' NHL debut. The Buffalo Sabres will commemorate the milestone during their home game on Saturday, Nov. 6, against the Detroit Red Wings.

James, who resides in Niagara Falls, Ontario, will be unable to attend the game, but shared his heartfelt thanks to the Sabres community for organizing the night.

"I'm afraid I will not be able to join you on Nov. 6 for the game, but I still appreciate the fact that you are supporting me and honoring me for my achievement of becoming the first African American to play NHL hockey 40 years ago," James said in a video statement released by the Sabres.

"What I appreciated most in regards to my involvement in the Buffalo Sabres Val James tribute was the nature of the collaboration being authentic and thorough from start to finish,” Wajed said. “As an artist, being granted and entrusted with near-total creative license and autonomy to create something meaningful, and historically relevant that will inspire generations to come, was a great gesture from the organization that will always be greatly appreciated."

The Buffalo Sabres Foundation’s mission is to identify and support organizations in Western New York that share its core objectives: serving children and military personnel, caring for the sick, assisting physically and mentally challenged athletes, and supporting youth hockey initiatives. By utilizing financial resources and community influence, the Buffalo Sabres Foundation assists these organizations and their beneficiaries in realizing their highest potential and succeeding in their endeavors.

Eight dollars from each "Breaking Barriers: Val James" shirt sold will be donated to their efforts.

Del Reid, the founder of 26 Shirts, said, “It’s an honor and a privilege to have worked on such an important design, one that we were able to springboard from the amazing work that Edreys did with the Sabres last February. We couldn’t be more proud to be partnering with the Buffalo Sabres for ‘Breaking Barriers: Val James.’ ”

Buffalo Sabres Foundation President Rich Jureller said, “We are very excited to partner with 26 Shirts on their release of the ‘Breaking Barriers: Val James’ T-shirt, which honors the historic achievement of James’ first NHL game 40 years ago. Val is a pioneer whose courage and determination helped pave the way for black hockey players at all levels. The limited-edition T-shirt is a great way for our fans to celebrate Val and his impact on the game of hockey.”