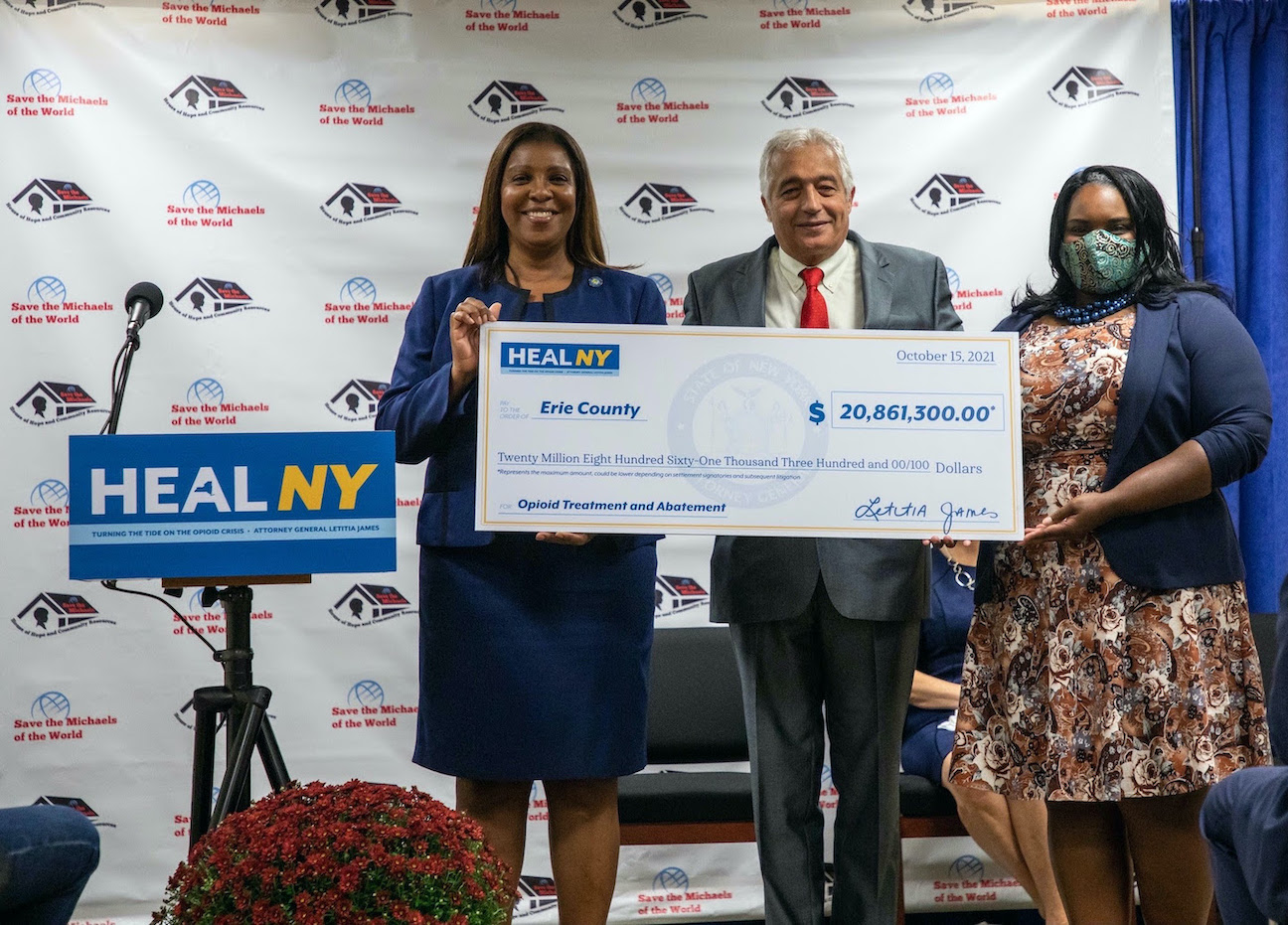 Attorney General James announces she will deliver millions of dollars to Erie County and other counties in Western New York to help local residents recover from the opioid epidemic. (Submitted photo)

New York Attorney General Letitia James on Friday continued her statewide “HealNY” tour of New York state with a stop in Buffalo, where she announced she will deliver up to $75 million to Western New York to combat the opioid epidemic.

The funds come from different settlements James has negotiated following her March 2019 lawsuit against the various manufacturers and distributors responsible for the opioid crisis.

James’ tour has already made more than a dozen stops in New York counties throughout the month of October, where she has been announcing up to $1.5 billion in funds going to counties across the state.  James also received the “Peoples’ Champion Award” from the organization Save the Michaels of the World in Buffalo for her work and advocacy combatting the opioid crisis.

“Over the last two decades, the opioid crisis has devastated Western New York, causing heartbreaking addictions, overdoses and deaths, but, today, we begin to heal New York by infusing up to $75 million into the community to invest in the programs that will help us recover,” James said. “While no amount of money will ever compensate for all the loss we have experienced, these funds will allow Western New York to invest in the prevention, treatment and recovery programs that will allow us to finally turn the tide on the opioid crisis and have a fighting chance at saving all the Michaels of the world.”

Last month, a settlement with Endo was announced that has already delivered $50 million to New York state and Nassau and Suffolk counties to combat the opioid crisis and remove the opioid manufacturer from New York’s ongoing opioid trial.

Also, last month, a settlement that secured more than $4.5 billion – at least $200 million of which will be earmarked for New York – from the Sackler family and foundations that they control, ends the Sacklers’ ability to manufacture opioids ever again, and will shut down Purdue Pharma was announced.

In July, a settlement with McKesson, Cardinal Health and Amerisource Bergen that will deliver up to $1 billion to New York state to combat the opioid epidemic was announced.

In June, a settlement that ended Johnson & Johnson’s sale of opioids nationwide and that will deliver $230 million to New York alone was announced.

The deals with Johnson & Johnson, McKesson, Cardinal Health, and Amerisource Bergen have a global value of approximately $26 billion.

The cases against Mallinckrodt and Rochester Drug Cooperative are now moving separately through U.S. Bankruptcy Court.

The trial against the two remaining defendants – Teva Pharmaceuticals USA and Allergan Finance – is currently underway and continues in state court.

James’ team said, “Pursuant to the new law establishing the opioid settlement fund, all funds collected by the state from opioid settlements or litigation victories will be allocated specifically for abatement efforts in communities devastated by the opioid epidemic and will not go towards the state’s general fund.

“Every region in the state will receive millions of dollars for prevention, treatment, and recovery programs to combat the opioid crisis.”

The figures listed below represent the minimum and maximum amounts each county can receive from the settlements with Johnson & Johnson, McKesson, Cardinal Health, Amerisource Bergen and Endo. The more localities across the state that agree to the terms of these different settlements, the more each locality is eligible to receive. The figures below do not include payments from Purdue Pharma or the Sackler family, as the regional split for those payments are still being finalized. Those funds, as well as any funds from future or ongoing litigation, would be in addition to what is listed below.

* In addition to sum total of counties, a regional share is also being allocated here.

“The opioid epidemic has deeply impacted families across the Western New York community for far too long,” U.S. Rep. Brian Higgins said. “Thanks to Attorney General James’ persistence, the companies responsible for this crisis are finally being held accountable. Although it cannot repay the lives lost to addiction, this funding will go a long way in providing resources for prevention and reaching those in greatest need of a path toward recovery here in Western New York and across New York state.”

New York State Sen. Tim Kennedy said, “The COVID-19 pandemic has only exacerbated the opioid crisis and triggered an increase in overdoses, with the CDC reporting that 2019 to 2020 marked the country’s deadliest year for substance abuse yet. Tragically, we know that national spike was mirrored here in Erie County and in Western New York. This money delivered today by Attorney General James will be transformative, and will directly assist the critical agencies and municipalities that are helping those struggling with addiction and guiding them through their recovery journey.”

New York State Sen. Sean Ryan said, “The opioid epidemic has caused immense tragedy here in Western New York, around our state, and across our nation. I commend the family members of those lost to opioid addiction who have turned their personal tragedy into a movement to save lives. I thank Attorney General Letitia James for working to hold the pharmaceutical industry accountable for their undeniable role in this crisis. The funds her office has secured will provide critical resources as we continue to combat opioid addiction in our state. By expanding our prevention, treatment and recovery programs, we commit ourselves to a safer and more hopeful future for the people of New York."

New York State Assembly Majority Leader Crystal Peoples-Stokes said, “The nearly $75 million Western New York is likely to receive for treatment and prevention to combat New York’s opioid crisis is an incredible milestone toward efforts to eradicate the opioid addiction epidemic. This funding, reached through the diligent work of Attorney General Letitia James and her team, will deliver resources to treat, prevent, educate and restore communities devastated by opioids across New York state. I applaud the leadership of Attorney General James on this important issue.”

Erie County Legislature Chair April Baskin said, “From the cities to the suburbs and even the most rural areas, the opioid crisis has truly hit all parts of Erie County. While no amount of money will bring back the loved ones lost or heal the broken families left behind, the compensation secured by Attorney General James’ office will help those in Erie County who are still here and still struggling. Local members organizations, like those that are a part of our Erie County Opioid Task Force, will be able to continue their collaboration on frontline response. I’m also hopeful that additional funding will provide for the rebuilding of minority and lower income communities as they recover. I’m grateful for the zeal with which Attorney General James has pursued these historic settlements, and while much work may lie ahead, I’m confident that we will continue to curb the trend away from addiction in Buffalo and Western New York.”

Buffalo Common Council member Rasheed Wyatt said, “I am so grateful to New York Attorney General Letitia James for taking a bold stand to successfully sue manufacturers and distributors of opioids that have negatively affected thousands of New Yorkers. These funds may not help those we lost, but may hopefully save many more Michaels in the future. This is the type of genuine leadership New Yorkers must have if we are to advocate for the most vulnerable.”

Separately, but related to her work on opioids, this past February, James co-led a coalition of nearly every attorney general in the nation in delivering more than $573 million – more than $32 million of which was earmarked for New York state – toward opioid treatment and abatement in an agreement and consent judgment with McKinsey & Company.