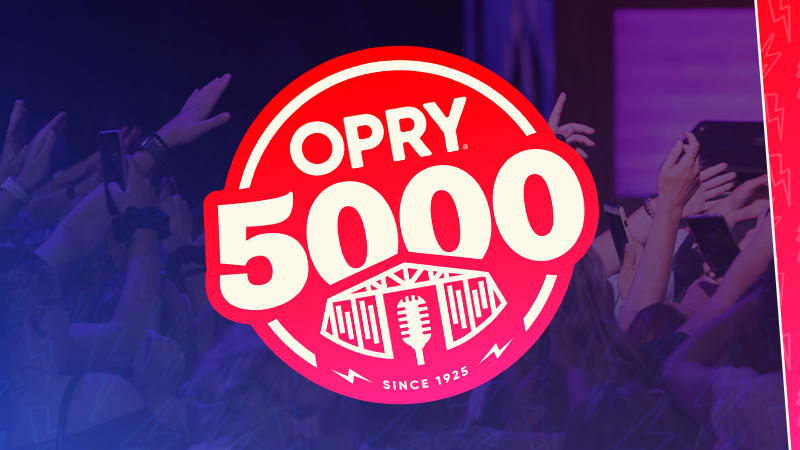 √ Show to be broadcast live on Circle Network; tickets available at opry.com

The Opry’s 5,000th Saturday night broadcast milestone includes a month of celebrations, a limited-time exhibit and a night of performances on the legendary Opry stage. The first of the night’s two ticketed shows will be available to stream live on Circle Network, including its Circle All Access Facebook, Twitter and YouTube channel.

“I think we all long for something that we can hang onto that gives us a source of comfort, a source of steadiness and something we can count on,” said Opry Member Marty Stuart at the August kickoff event for the Opry 5,000th. “In the midst of turmoil and the best of times, that circle has seen it all. … The Opry has proven itself to be this indelible kind of thing that not only America, but the globe can count on – that on Saturday night, there’s a beam of goodness that, if you find it, you’re going to plug into that. It makes a difference in your heart.”

To further celebrate its legacy, the Opry launched a limited-time exhibit, “Opry Memories: Celebrating 5,000 Saturday Night Broadcasts,” that takes guests on a journey through the past almost 100 years. inception of WSM and the first Opry broadcasts and continues forward covering special moments from milestone broadcast eras of 1,000 broadcasts up to present day. The exhibit features artifacts and photos from current Opry members including Luke Combs, Dolly Parton, Carly Pearce, Yearwood and many others, as well as items from some of the Opry’s earliest stars including Roy Acuff, DeFord Bailey and Minnie Pearl.

Since its inception, the Opry has helped launch the careers of countless iconic artists and continues to recognize and foster new talent alongside some of country music’s most legendary performers. With the help of Circle, the Opry is reaching its largest audiences to date, earning the No. 1 spot on Pollstar’s Top 100 Livestreamers Chart across all genres for 2020. Opry Live can be found on Circle via Peacock, DISH Network, Redbox, Roku Inc., Samsung TV Plus, VIZIO SmartCast, XUMO and STIRR, bringing its country lifestyle programming to millions more through TVs, smartphones and tablets.

The Grand Ole Opry’s month-long celebration of the historic 5,000th Saturday night broadcast is presented by Humana and sponsored by Tecovas, GEICO and Jewelry Television.

For more information or to purchase tickets, visit Opry.com/5000.

Experience Nashville like a country music star! Celebrate the Opry’s 5,000th Saturday night broadcast with a weekend getaway to Music City where you’ll get VIP treatment with tickets to our Opry 5000 Saturday celebration and show, hotel stay at the iconic Gaylord Opryland Resort. The Opry will throw in $5,000 to spend while you’re in Nashville. To enter the sweepstakes, go to www.Opry.com/5000.

Opry presents the best in country music live every week from Nashville. The Opry can be heard at opry.com and wsmonline.com; Opry and WSM mobile apps; SiriusXM; and its flagship home, 650 AM-WSM. The Grand Ole Opry is owned by Ryman Hospitality Properties. For more information, visit opry.com.