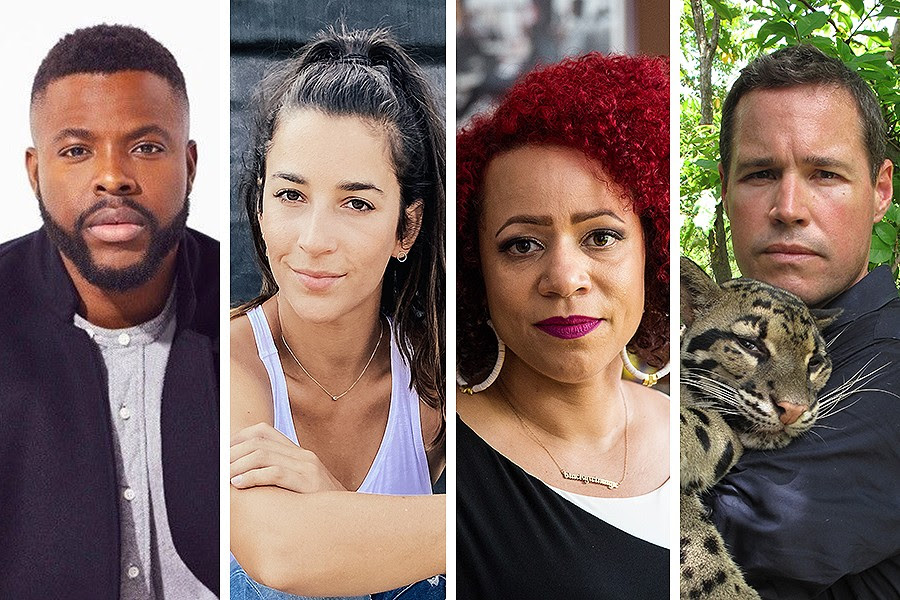 UB's Distinguished Speakers Series back in person for 2021-22

Nikole Hannah-Jones, the Pulitzer Prize-winning creator of “The 1619 Project,” and gold medal Olympic gymnast Aly Raisman are among the speakers who will headline the University at Buffalo’s 2021-22 Distinguished Speakers Series, which will be back in person for its 35th season.

The season also will feature actor and UB alumnus Winston Duke, and conservationist and environmental journalist Jeff Corwin. Corwin was to have been the final speaker of the 2019-20 season, but his talk was rescheduled to this season.

All talks will take place at 7 p.m. in the Mainstage Theatre in the Center for the Arts, North Campus.

“One of our university’s most popular traditions, the Distinguished Speakers Series holds special significance for us as we celebrate UB’s 175th anniversary,” President Satish K. Tripathi said. “With the return of our series to an in-person format, we are delighted to welcome to campus an eminent cadre of influential thought leaders – including a UB alumnus – who promise to engage us in candid, provocative conversations about some of the most compelling issues facing society.”

The series will kick off on Oct. 13 with a talk by Duke, who has appeared in such television shows and movies as “Us,” “Black Panther” and “Spenser Confidential.”

A native of Trinidad and Tobago who received a BA in theater from UB and an MFA from the Yale School of Drama, Duke made his feature film debut playing the fan-favorite character M’Baku in “Black Panther,” which earned him his first NAACP nomination for “Breakout of the Year.” He reprised the role in “Avengers: Infinity War” and “Avengers Endgame.”

Duke’s projects also include Sony Pictures Classics’ “Nine Days,” which premiered to rave reviews at the 2020 Sundance Film Festival; he served as an executive producer, as well as played the lead role in the film.

He has received numerous accolades, among them the Advanced Imaging Society’s Social Justice Lumiere Award for his work as the star and executive producer of “The Messy Truth VR Experience,” a virtual reality short-doc that provides viewers with a look at the timely themes of race, mercy and redemption through someone else’s eyes.

Outside of acting, Duke is an advocate for the HeForShe movement, and issued a global call to action for gender equality during the United Nations HeForShe Impact Summit in 2018.

Duke was recently named the first celebrity ambassador for Partners in Health, a nonprofit global health and social justice organization fighting injustice by bringing the benefits of modern medical science to impoverished communities around the world.

Raisman, the third-most-decorated American gymnast of all time and team captain of the Olympic gold medal-winning women’s teams in 2012 and 2016, will speak Nov. 16.

The most decorated U.S. gymnast at the 2012 games, Raisman captured the hearts of millions when she became the first American gymnast to win gold in the floor exercise. One of only three U.S. gymnasts to make back-to-back teams in more than 20 years, she helped guide the team to gold and landed a silver medal in the all-around competition at the 2016 games.

A leader off the gymnastics floor as well, Raisman uses her platform to help normalize the conversation around mental health, encourage positive body image and promote the importance of self-care. In her New York Times best-selling memoir, “Fierce,” she shares the highs and lows of her journey, including surviving sexual abuse. Inspired by an army of survivors, Raisman continues to advocate for systematic changes within the sport of gymnastics and the eradication of sexual abuse.

Hannah-Jones covers racial injustice for The New York Times Magazine, and has spent years chronicling the way official policy has created – and maintains – racial segregation in housing and schools. She is the creator and lead writer of the Times’ major multimedia initiative “The 1619 Project.”

Named for the year the first enslaved Africans arrived in America, the project features an ongoing series of essays and art on the relationship between slavery and everything from social infrastructure and segregation, to music and sugar – all by Black American authors, activists, journalists and more. Hannah-Jones wrote the project’s introductory essay, which earned her the 2020 Pulitzer Prize for commentary.

She also is the recipient of a MacArthur Fellowship, a Peabody Award, two George Polk awards and three National Magazine awards.

She recently was named the inaugural Knight Chair in Race and Journalism at the Howard University School of Communications, where she will also found the Center for Journalism and Democracy.

On April 5, host of the ABC series “Ocean Treks,” conservationist and environmental journalist Corwin will conclude this year’s series.

For over two decades, Corwin has been telling stories of wildlife and nature to global audiences through his many celebrated television series on NBC, Travel Channel, Food Network, Disney Channel and Discovery, as well as ABC. He has been awarded three Emmys for his work in television.

His first series was the wildly successful “Going Wild with Jeff Corwin” on Disney Channel. His Animal Planet series “The Jeff Corwin Experience” was a global sensation. Corwin is also the creator and co-presenter of CNN’s groundbreaking documentary “Planet in Peril,” hosted alongside Anderson Cooper and Sanjay Gupta.

In addition to serving as executive producer and host of “Ocean Treks,” he is an executive producer and presenter for the giant screen film “Expedition Chesapeake,” and narrator for David Attenborough’s celebrated cinematic documentary “Galapagos, Nature’s Wonderland.” During the Gulf oil spill, he served as an environmental correspondent for both CBS and NBC news.

In April 2020, Corwin created and was executive producer of the critically acclaimed series “Alaska Animal Rescue” for Nat Geo Wild, now in its second season. His NBC documentary and book, “100 Heartbeats,” has engaged both readers and the broadcast audience in the 21st century plight of endangered species.

Corwin has also authored 10 books on wildlife and nature, including “Living on the Edge, Amazing Relationships in the Nature World.”

Those who held 2019-20 series subscriptions (all lectures as a package) will receive an email on how to renew. Those who would like to purchase new series subscriptions or individual lecture tickets may do so beginning Sept. 20 through Ticketmaster. Tickets may also be purchased at the Center for the Arts box office from noon to 6 p.m. on Tuesdays and Thursdays. Information on how UB students may access tickets will be provided on the Distinguished Speakers Series website before each lecture.

UB’s Distinguished Speakers Series has been bringing the world to UB audiences for more than 30 years, featuring speakers who engage, inspire and entertain.

Speaker and ticket information are available on the Distinguished Speakers Series website.