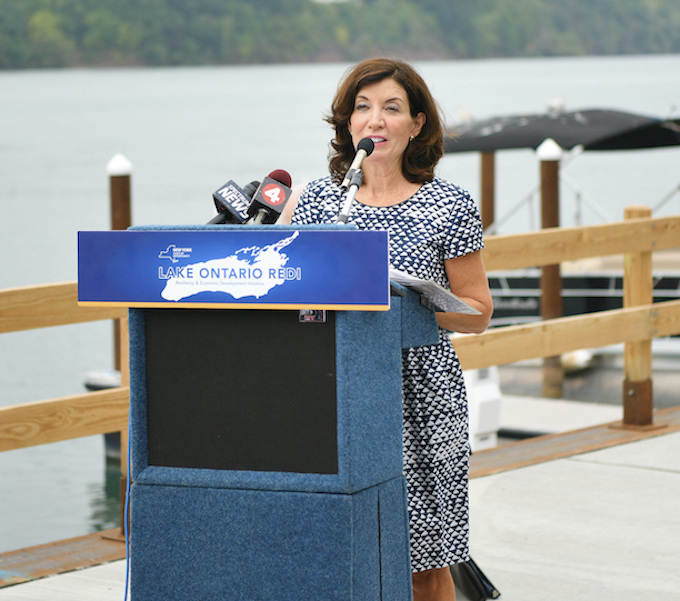 Elected leaders excited for Kathy Hochul to take over as governor

Following Cuomo’s press conference, Lt. Gov. Kathy Hochul stated, "I agree with Gov. Cuomo's decision to step down. It is the right thing to do and in the best interest of New Yorkers.

“As someone who has served at all levels of government and is next in the line of succession, I am prepared to lead as New York state’s 57th governor."

A strong advocate for Western New York, where she was first elected to office, Hochul is set to become the state’s first woman governor.

New York State Senate Republican Leader Rob Ortt said, “Today marks one small step toward restoring honor, decency and accountability to New York state government. I hope today also brings some measure of justice to the brave women who had the courage to come forward against a powerful and vindictive political figure.

“Over the past year, Andrew Cuomo’s credibility completely fell apart. Now, following his overdue resignation, it will never be repaired. The governor’s pervasive harassment and coverups cast a dark cloud over our State Capitol and took us away from the important work facing this state.

“Andrew Cuomo broke the law, lied about it, and shamelessly smeared the women who came forward. His resignation is welcome, but it stops short of the justice his victims and the people of New York deserve. The FBI, the state attorney general, and other proper authorities must also be allowed to continue their work investigating all of the possible crimes related to our state’s nursing homes crisis and the governor’s questionable book deal. The Legislature must examine the Cuomo administration’s many failings in public forums as soon as possible so that these abuses of power will never happen under another administration.

“We must also acknowledge the fact that the Democrats in the Legislature failed to hold Andrew Cuomo or his administration accountable, despite our repeated calls to do so.

“Well, after the numerous credible allegations were made against Andrew Cuomo, Democrats in both the Senate and Assembly stood by him, normalizing his behavior and enabling him to cling to power. I hope those in the Legislature – and other powerful figures around the state – reflect on their own actions in response to Andrew Cuomo’s disturbing behavior. The vocal support and the deafening silence of many helped keep Andrew Cuomo in power far longer than he deserved.

"In 14 days. we will have our first female governor. I’d like to congratulate Lt. Gov. Kathy Hochul, a fellow Western New Yorker, on becoming the first woman to assume leadership of this state. My fellow senators and I look forward to working with Gov. Hochul as we continue to tackle the issues of rising crime, our state’s struggling economy, and the resurgence of the COVID-19 virus."

Congressman Brian Higgins, whose camp called him a friend of Hochul’s, stated, “From her earliest days as a local official to her time as my colleague in Congress and her service as lieutenant governor, Kathy Hochul’s sole priority has always been the people. Kathy is a public servant of integrity who works hard to listen to and deliver for the communities she represents. She will be an excellent governor and will make New Yorkers proud.”

Assemblyman Angelo Morinello said, “While this is a situation that should have never occurred, the governor has acted in the best interest of New Yorkers by stepping down. State government will always be of, by and for the people and I look forward to putting this dark time in New York’s history behind us so we can focus on what really matters: you.”

Assemblyman Mike Norris stated, “At last, Gov. Cuomo is allowing the people of New York state to move forward by offering his resignation and ending this dark and difficult chapter in our state’s history.

“As a lifelong Western New Yorker, I look forward to working together with our state’s first female governor, Kathy Hochul, to continue to strengthen our region and help our state’s economic recovery.”

Assembly Speaker Carl Heastie said, This has been a tragic chapter in our state's history. Gov. Cuomo's resignation is the right decision.

“The brave women who stepped forward were heard. Everyone deserves to work in a harassment free environment.

“I have spoken with Lt. Gov. Hochul and I look forward to working with her.”

Erie County Executive Mark Poloncarz stated, “With today’s announcement New York state has turned the page and will be beginning a new chapter with Kathy Hochul as our 57th governor and the first female governor of our great state. I have known Kathy for decades, having worked with her closely on numerous issues, and I can confirm that she has the work ethic, determination and skillset to not only succeed in the job but to take the Empire State to new heights. There are many challenges remaining, both in Erie County and statewide, as we continue the fight against the COVID-19 pandemic and focus on the recovery and renewal of our economy and communities. Kathy has been involved, active and engaged in these efforts throughout, and I now look forward to continuing to work with incoming Gov. Hochul, serving our constituents and creating the best New York state possible.”

Attorney General Letitia James said, “Today closes a sad chapter for all of New York, but it’s an important step towards justice.

“I thank Gov. Cuomo for his contributions to our state. The ascension of our lieutenant governor, Kathy Hochul, will help New York enter a new day. We must continue to build on the progress already made and improve the lives of New Yorkers in every corner of the state. I know our state is in good hands with Lt. Gov. Hochul at the helm, and I look forward to continuing to work with her.”

New York Farm Bureau President David Fisher stated, “New York Farm Bureau looks forward to continue working with soon-to-be Gov. Kathy Hochul as she seeks to provide stability to the governor's office and address critical matters facing our state. She is a longtime friend to the state’s farming community and its people. Her work in Congress and as lieutenant governor brought her close to the issues facing agriculture, and she has always been open to listening to our concerns, visiting our farms, and meeting with our members at the annual New York Farm Bureau Taste of NY Reception in Albany. Lt. Gov Hochul recognizes that New York agriculture is vital to our state’s economy, local food supply, and expanding access to healthy food for all New Yorkers.”

New York State United Teachers President Andy Pallotta said, “Kathy Hochul has long been a dedicated public servant and has shown leadership throughout her career. We look forward to working with her on the challenges we face ahead.”

New York State School Boards Association Executive Director Robert Schneider stated, “We join in the disappointment that all New Yorkers have felt following recent allegations and revelations about the conduct of Gov. Andrew Cuomo and members of his administration.

“We recognize that Gov. Cuomo’s departure comes at a particularly inopportune time for our state, as the COVID-19 Delta variant continues to spread, and localities contemplate new restrictions on indoor activities.

“But at a time when we have so many critical challenges unfolding, New Yorkers deserve to have a governor who is fully focused on their needs and interests. Sadly, given the circumstances, that would appear to be an impossible task at this time for Andrew Cuomo. New Yorkers, including our students, deserve a chief executive who sets an example of a safe and healthy workplace free from hostility and harassment.

“The conclusions from the attorney general’s investigation only divert attention from the important actions that state lawmakers and agencies must take in order to ensure that our school districts can open safely in September.

“We welcome former Lt. Gov. Kathleen Hochul to her new role as governor, and we are encouraged by the breadth of state, local and federal governmental experience she brings to the position. Her strong work ethic, her ability to connect with people throughout the state and her longtime dedication to public service will be important assets as she takes on this unanticipated leadership transition.

“We look forward to working with Gov. Hochul and all of our state leaders to serve our students and educators, and to strengthen public education in New York.”

Ontario County Chairman Jack Marren, president of the New York State Association of Counties, said, “Today’s announcement that Gov. Cuomo will step aside brings needed closure to the uncertainty that has paralyzed our state for the last week. The last year-and-half has shown that counties are essential in the fight against controlling a resurgent COVID-19 pandemic and leading the economic revival of our communities. We need stability in government to ensure essential services continue for the people of New York. Lt. Gov. Hochul understands the present state of the state and will need to engage immediately. We look forward to beginning this new chapter under the leadership of a dedicated public servant and former local government leader who understands the essential role of counties in the lives of New Yorkers.

“Our counties stand ready to support this transition and will continue our ongoing work to make our communities stronger, safer and better places to live, work and raise a family.”