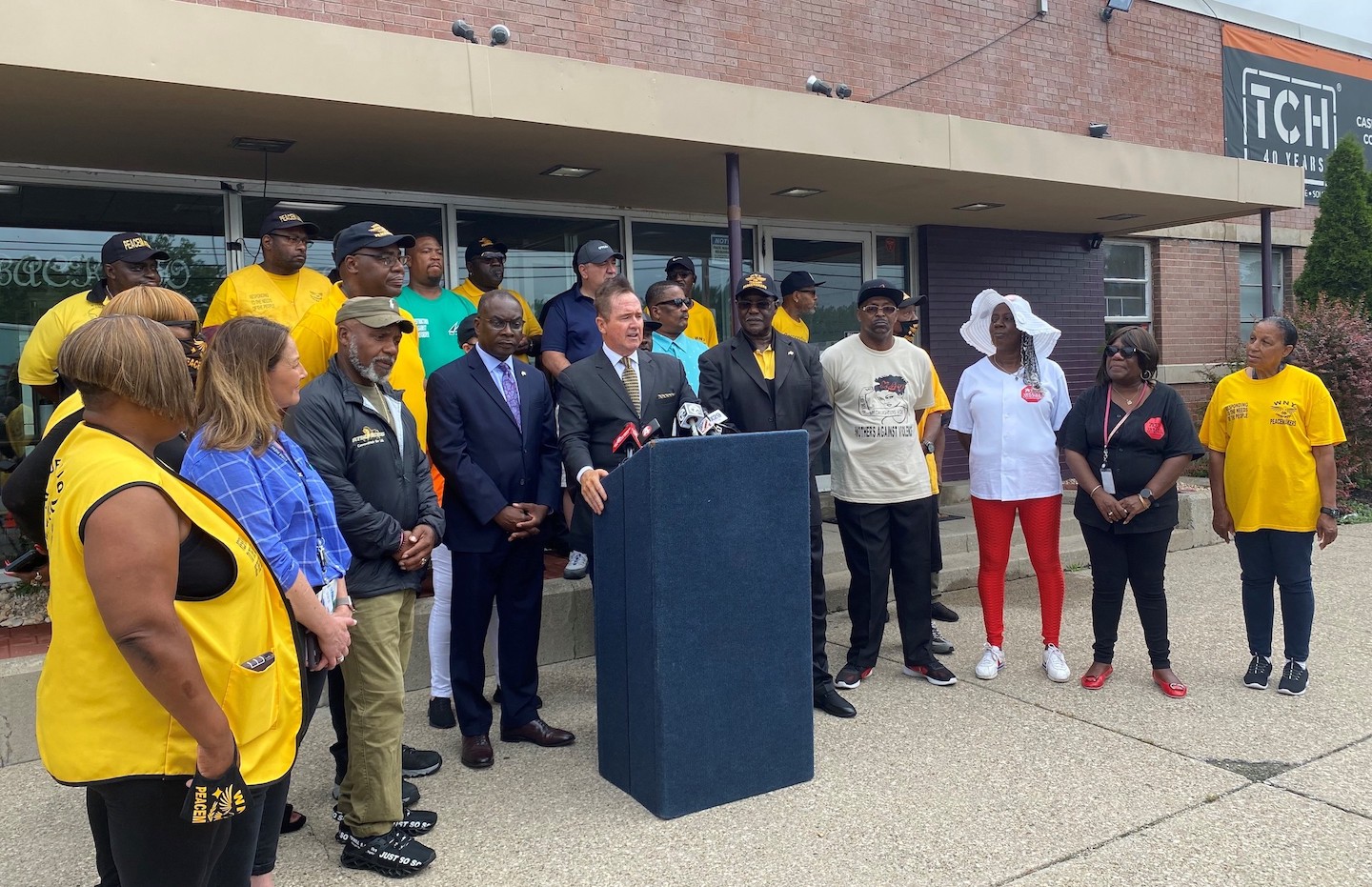 Flanked by city governmental and community leaders, Congressman Brian Higgins announced an agreement between the City of Buffalo and the Buffalo Violence Prevention and Reduction Coalition to utilize federal American Rescue Plan funding to address the rising number of deadly shootings in city neighborhoods through enhanced community violence intervention programming.

On June 24, the Biden administration released guidance clarifying state and local fiscal recovery funds made available by Congress may be used for community violence intervention programs. Under the agreement, the city and coalition will deploy $5 million in CVI funding to address youth at risk of perpetrating or becoming victims of violence; support victims and families with food security and violence-related repairs; offer youth intervention and mentorship; and deploy violence interrupters to mediate and reduce community violence.

“Residents in the City of Buffalo have been witness to a terrible spike in gun violence over the past several weeks, and that violence threatens to worsen without immediate and decisive action,” Higgins said. “Community violence intervention programs work well, and particularly when those involved have credibility both with law enforcement and the community at large. That’s what we have with this coalition of community leaders, and that’s what we’re looking to put in place today.”

A press release stated, “The agreement comes in response to the surge of deadly shootings terrorizing Buffalo neighborhoods. Last year, the city experienced a 90% increase in fatal and non-fatal shootings totaling 355 victims. Tragically, these shooting sprees show no sign of abating. In the name of public safety, Congressman Higgins (reached out) to U.S. Attorney General Merrick Garland seeking the assistance of the Department of Justice and federal law enforcement to combat the trafficking of the illegal firearms being used to commit these acts of violence against the people of Buffalo.”

Higgins said, “The people of Buffalo and Western New York deserve to feel safe in their homes and neighborhoods. They deserve the peace of mind which comes when a child is safe to play outside or walk to school. Tragically, this indiscriminate surge in gun violence is tearing apart whole families and denying young, innocent children a lifetime of opportunity and happiness. We must utilize every resource available to our community, to not only stop the growing number of shootings, but prevent more in the future.”

Brown said, “Community violence must be treated in the same way we have addressed the other public health crises our city has confronted over the last year-and-a-half. There must be a focus on prevention, community engagement and proven interventions, which interrupt the spread. This use of Buffalo’s American Rescue Plan funds will make an immediate impact on the lives of young people who will be directly helped by these programs in Buffalo. I want to thank Congressman Brian Higgins, our community partners at SNUG, Pastor Giles and Back to Basics Outreach Ministry, Peacemakers, MAD DADS, our partners at ECMC, and everyone else who came together to make this innovative use of funds possible and help ensure safer neighborhoods for our community’s children and other residents.”

Pastor James E. Giles of Back to Basics Outreach Ministries said, “Community violence intervention programs provide critical assistance in real-time, on the ground, and they work. When organizations like ours have the resources to get into the community, we have the ability to stop the violence before it escalates out of control. I'm grateful to Congressman Higgins for meeting with us last week, and my thanks go out to Mayor Brown and council members who will help us help our communities.”

Nowakowski said, "As a City Council member, I have my eyes and ears on the ground floor, listening to constituents concerns and fears about gun violence in our community. They want this pandemic of gun violence to end, and want to live and work in their neighborhoods safely. Community-based solutions are an effective way to combat violence, and I thank Congressman Higgins for his leadership role in bringing the American Rescue Plan funding to Buffalo so swiftly to address this urgent need in our community.”

In the House of Representatives, Higgins supports “common-sense gun safety legislation, which would complement this effort, such as repealing the Tiahrt Amendment, which prevents the public from accessing ATF trace data for research purposes; funding gun buybacks; and authorizing the U.S. Centers for Disease Control and Prevention to study the root causes of gun violence in the United States.”