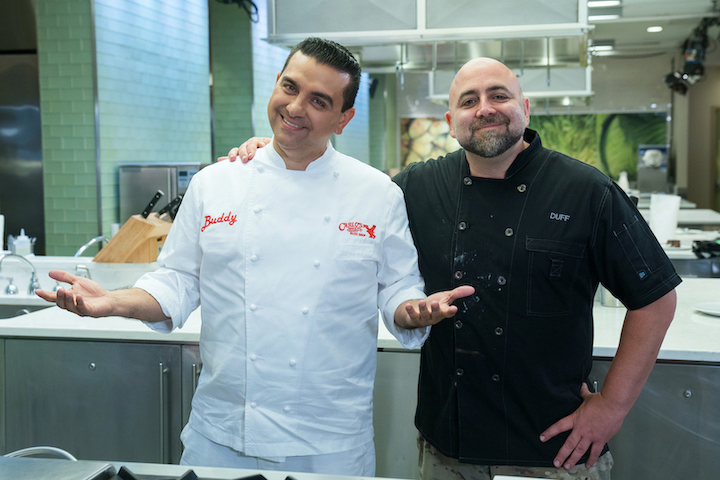 √ Plus, when the bakers are away, the teams will play in ‘Buddy vs. Duff: Baker Battle’

Duff Goldman (“”Ace of Cakes) won the king of cake in season one, and Buddy Valastro (“Cake Boss”) took home the crown in season two. Now, these longtime rivals are back to battle in the ultimate baking brawl on “Buddy vs. Duff,” beginning Sunday, July 18 (9 p.m. ET/PT), on Food Network and discovery+.

This year, the eight-week competition will span the country as the famed bakers and their teams of cake artists will tackle each cake challenge from their bakeries; Duff on the West Coast in Los Angeles, CA and Buddy on the East Coast in Hoboken, New Jersey.

A press release stated, “Every aspect of what it means to be a true pastry artist and cake master will be tested as they must build elaborate, enormous cakes that fit the theme each week. From safari cakes, to pirates of the high seas, the bakers’ techniques, decorating expertise and creative imaginations will be pushed to the limit. The cakes will be on display in an event space that transforms each week to become an immersive world based on the theme for the challenge. Fifty professional cake artists from across the country will virtually judge the cake designs to determine which cake master is top tier. The pressure is on as the two biggest names in cake vie to rise to the top and settle the score once and for all!”

Food Network President Courtney White said, “This past year has been life-changing for Buddy and Duff; Buddy suffering a horrific injury to his dominant hand, and Duff welcoming a daughter and becoming a first-time father. These momentous events have given them a newfound appreciation for life and family – in addition to a stronger motivation to prove their incredible talents with the best cake designs these bakers have ever created in order to break their tie in this fierce cake competition.”

Throughout the season, they will be challenged to impress with ancient world-inspired cakes; dazzle with souped-up dream car cakes equipped with lights, engines and hydraulics; and make mouths water with a decadent feast of savory foods made entirely of cake. If that’s not enough, they must also design cakes showcasing a bug’s world, and then they head to the high seas with pirate ship cakes and explore architectural wonders around the world. In the supersized two-hour finale on Sunday, Sept. 5 (8 p.m.), Buddy and Duff face the most monstrous challenge yet as they are tasked with creating monster cakes. After weeks of intense competition, it all comes down to these final creations.

Before the competition begins, fans can relive last season in a special look-back on “Buddy vs. Duff: Preheat” on Sunday, July 18 (8 p.m. ET/PT). For fans craving more cake competition, on Sundays, Aug. 1 and 8 (10 p.m. ET/PT), don’t miss “Buddy vs. Duff: Baker Battle,” as Duff’s and Buddy’s teams kick them out of their bakeries to show what they can do without them in their own cake challenges to prove which team is the best.

Plus, each week fans can head to FoodNetwork.com/BuddyvsDuff to see a member from Team Buddy and Team Duff compete in a head-to-head mini-challenge showing off their carving, sculpting and decorating skills. Also, Buddy and Duff will compete in their own mini-challenge too!

Fans can follow along with the competition on social media using #BuddyVsDuff.