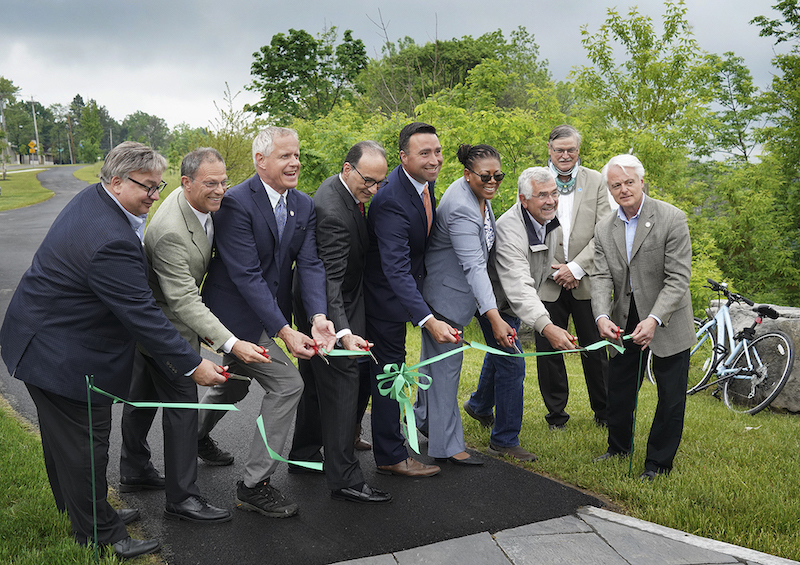 Gov. Andrew Cuomo on Thursday announced the dedication of a major project that removed an underutilized, two-mile stretch of the former Robert Moses Parkway – now called the Niagara Scenic Parkway – in the City of Niagara Falls. His team said this work created a stunning new area in Niagara Falls State Park called "Gorgeview," which provides unimpeded access to the Niagara Gorge and improved recreational opportunities for residents and visitors alike.

The project removed the segment of the parkway from Main Street to Findlay Drive and replaced it with “new green space that features picnic areas, scenic overlooks with majestic views and a network of recreational trails.” Additionally, the New York State Department of Transportation completed a full-depth reconstruction of Whirlpool Street and a segment of Third Street to accommodate local vehicular access, from the parkway and adjoining city streets. New street lighting, landscaping, traffic control devices, pedestrian crosswalks, on-street parking areas, drainage improvements and upgrades to entrance drives and park trolley paths around the Niagara Gorge Discovery Center also were among the improvements.

"The Niagara River Gorge is one of the most picturesque areas of New York state and the completion of this project is transformational – it redefines local and visitor perception of the area's unparalleled natural beauty and will make Niagara Falls an even more attractive place to live, work and visit," Cuomo said. "We are continuing to make significant investments like this that enhance Niagara Falls' status as a world-class tourism destination and further our tremendous progress in revitalizing the Western New York economy."

Lt. Gov. Kathy Hochul said, "Niagara Falls is a wonder of the world unique to Western New York and its awe-inspiring beauty has been preserved with Niagara Falls State Park, the oldest state park in the United States. With the removal of the former Robert Moses Parkway, we are further connecting visitors to the natural beauty found along the Niagara River and gorge. The new Gorgeview at Niagara Falls State Park provides more access and recreational areas for visitors with spectacular views of the Niagara Gorge."

The press release noted, “Gorgeview will further revitalization and economic development efforts in Niagara Falls by reconnecting the city to its waterfront for the first time in a generation and cementing the region's status as a top destination for recreation and tourism. Where the city's 20 streets leading to the gorge rim once terminated at guard rails and fenced barriers, there are now panoramic views and, just as important, access to a comprehensive network of trails that connect to, among other places, the base of the gorge and Whirlpool, DeVeaux Woods and Devil's Hole state parks.”

The dedication comes ahead of National Trails Day, June 5, an annual event to highlight and celebrate America's trails. All totaled, the project yielded a net increase of seven acres of new open space, but also created a 140-acre unbroken green ribbon of park land along the Niagara Gorge rim as well as more than five miles of new multipurpose trails and soft paths that provide a seamless connection to the nearly 20-mile trail network between from the upper Niagara River to Artpark in Lewiston. It marks the largest expansion of Niagara Falls State Park since the creation of the park in 1885.

Full funding for construction of the project was announced by Cuomo in the spring of 2016, largely financed by the New York Power Authority with help from the New York State Office of Parks, Recreation and Historic Preservation, and implemented through a formal agreement among NYPA, State Parks, NYSDOT, Empire State Development's Niagara Falls subsidiary USA Niagara Development Corp., and the City of Niagara Falls.

The nearly $50 million project, which was completed on time and on budget, was accomplished after an extensive public planning/design process led by USAN on behalf of State Parks, and built under three individual construction contracts administered by NYSDOT. The first contract involved removal of a 1,700-foot-long viaduct/overpass that had carried the parkway over the Whirlpool Bridge and its Customs and Border Patrol plaza. Finished in the fall 2019, this component also included the removal of an abandoned railroad bridge passing over Whirlpool Street and a pedestrian bridge that once connected the Discovery Center to the Aquarium of Niagara.

The railroad bridge removal allowed for the construction of a new community space and a key trailhead leading to the base of the gorge. Named "Freedom Plaza," it is located across Whirlpool Street from the Niagara Falls Underground Railroad Heritage Center and will facilitate historic interpretation near the location of the former bridge where Harriett Tubman helped Freedom Seekers escape to Canada. It is anticipated that, over the coming years, the plaza will host public art and storytelling features to portray the unique history of this location.

Completed in the summer of 2020, the second component of the project involved full-depth reconstruction of Whirlpool Street and Findlay Drive, and segments of Third and Walnut streets in Niagara Falls. Each was fully rebuilt as two-lane, "complete" city streets, with new sidewalks, crosswalks with curb bump-outs, lighting, street parking, and landscaping to facilitate vehicular access at neighborhood-appropriate speeds in the corridor. This reconstruction allowed for vehicular access from the Niagara Scenic Parkway and adjoining city streets to be accommodated on Whirlpool and Third streets, as well as a new vehicular connection from the city into the state park along Walnut Street to the Discovery Center.

The third and final component involved removal of all the parkway's lanes, ramps and other features along the Niagara Gorge rim and restored these lands with a park setting that now includes meadow areas and almost 650 new shade, flowering and evergreen trees, as well as numerous shrubs and wildflower plants. These plantings compliment an emerging "signature native landscape" feature being undertaken by the Western New York Land Conservancy at the northern end of the project limits, as part of that organization's larger "Restore the Gorge" effort, which is funded in part by Cuomo's Buffalo Billion. The construction of entrance walls, multiuse paths, picnic areas and scenic overlooks complete the project.

City residents and visitors alike now have access to the Niagara Gorge to pursue a variety of recreational opportunities in the newly created green space. For example, an open space connection has been created between the Niagara Gorge Discovery Center and the Aquarium of Niagara, providing a single park space between the two facilities that can now host outdoor events, all connected via the new Niagara Scenic trolley paths to Prospect Point and the rest of the park. In turn, recent city and state efforts hold significant promise for revitalization in adjoining neighborhoods resulting from this great achievement, most notably the announcement of a NYS Downtown Revitalization Initiative (DRI) award for a series of efforts along North Main Street that will capitalize on this new physical and visual access to the Niagara Gorge.

New York State Department of Transportation Commissioner Marie Therese Dominguez said, "The department was proud to lead the construction effort on this signature project for the City of Niagara Falls, which created a spectacular new green space and improved access to one of the great natural wonders of New York state – the Niagara Gorge. No state is doing more to create a vibrant and resilient infrastructure that meets the demands of the 21st century than New York under the leadership of Gov. Cuomo."

New York Power Authority Board of Trustees Chairman John R. Koelmel said, "Under Gov. Cuomo's leadership, the New York Power Authority worked alongside our esteemed partners including the City of Niagara Falls, the Western New York Land Conservancy, New York State Parks, Empire State Development and the New York State Department of Transportation, among others to open up Gorgeview for all to enjoy. As board chair, I am proud to see the fruits of this major investment that will enable enjoyment of our majestic waterfront for generations to come."

New York Power Authority President and CEO Gil C. Quiniones said, "Restoration of the upper rim of the Niagara River Gorge and unimpeded access to the gorge rim from the neighborhoods adjoining the parkway is a game-changer for the community of Niagara Falls, bringing economic benefits for years to come. NYPA, as an organization that is part and parcel of the Niagara community, is very proud to have supported this project that capitalizes on the beauty of the Western New York Region and will attract New Yorkers and visitors from all over to enjoy the Niagara Gorgeview."

Empire State Development Acting Commissioner and President and CEO-designate Eric Gertler said, "ESD is proud to have worked with the interagency team by leading the planning phase of this important project, which is transforming the Niagara Gorge corridor. Unveiling the area's natural assets – scenic views, waterfront accessibility and open space – will encourage local investment and economic activity, building on our successes in Niagara Falls, enhancing regional tourism and contributing to the broader vibrancy and vitality of Western New York."

State Parks Commissioner Erik Kulleseid said, "State Parks is grateful to Gov. Cuomo and our state government partners for their work on these projects – which will add to the experience of both our region's residents and people who come from all over the world to explore the breathtaking Niagara River Gorge. Parks and open spaces are crucial to our happiness and well-being, and these projects will create more space for people to get out and enjoy the benefits of outdoor recreation."

NYPA built the parkway in stages between 1958-67 as part of the construction of the nearby Niagara Power Project. It was then viewed as necessary to both enhance tourism to compete with the Canadian side of the falls, and to also dramatically reduce commuting times in the area. A section of the parkway that ran through the State Park and the falls was removed in the 1980s. By 2013, after a pilot project and a number of planning studies called for reconfiguration or removal of segments of the expressway to allow full enjoyment of the Niagara Gorge's great resources, Cuomo announced two removal projects, first the "Riverway" completed in 2017, which removed a mile of the parkway on the upper Niagara River, followed by the current Niagara Gorge Project, which removed an additional two miles along the gorge rim. These efforts join a number of similar completed and planned expressway removal projects across the U.S. targeted to remove physical barriers to full access in urban neighborhoods.