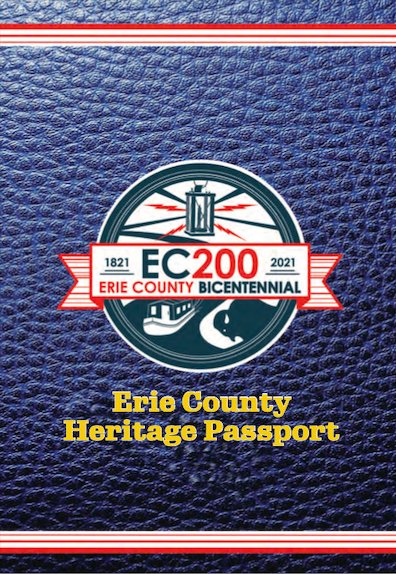 The EC200 bicentennial committee announced the release of the Erie County Heritage Passport, a handheld guide to 35 historical societies and museums across Erie County. Each institution is unique and commemorates the diverse nature and history of each town in the county, from the Town of Alden to the Town of West Seneca.

The passports are available at all Buffalo & Erie County Public Libraries and will soon be available at all of the 35 museums and historical societies listed inside. The Heritage Passport will also be available to view online and can be downloaded as a printable PDF at www.erie.gov/EC200.

“Erie County’s rich history is on display during this bicentennial year, and each town in the county has its own story to tell,” Erie County Executive Mark Poloncarz said. “Picking up a handy Heritage Passport makes it easy to plan visits to our museums and historical societies throughout the summer, enjoying family fun across the county and learning about our history at the same time.”

Library Director Mary Jean Jakubowski said, “Our 37 libraries are pleased to be distribution locations for the new Erie County Heritage Passport. While picking up the keepsake, we hope you will explore library resources available on the rich history of our region.”

The EC200 passport committee, a group of local historians and historical societies, took the lead on developing the concept of a countywide passport and gathered information for inclusion from each town in the passport. The result, they said, is a comprehensive, easy-to-use guide with hours of operation, items of interest and contact information for all of the 35 museums and historical societies listed.

“The passport committee did an outstanding job in putting together a user-friendly resource that’s packed with information and resources, and the entire EC200 committee thanks them for their hard work,” Erie County Historian and EC200 Co-chair Doug Kohler said. “Everyone who uses the passport is encouraged to have it stamped in as many historical museums or societies as they can in order to be eligible for a special commemorative keepsake in the fall, with more details forthcoming.”

Members of the EC200 passport committee include:

On April 2, 1821, New York state officially recognized Erie County. After the American Revolution, the Holland Land Co. purchased 3.2 million acres of land from the Seneca Nation of the Haudenosaunee (Iroquois). In 1808, New York organized the western-most land as Niagara County.

By 1821, the population had increased so much that Niagara County was split. Erie County, the land south of Tonawanda Creek, consisted of 10 towns and the Buffalo Creek Reservation. Today, Erie County has 25 towns, three cities, two tribal territories and a population of approximately 920,000.

Erie County has ties to several U.S. presidents. Millard Fillmore practiced law in East Aurora before serving as commander-in-chief. He returned to Erie County and helped establish the University of Buffalo, Buffalo General Hospital and the Buffalo and Erie County Historical Society. Grover Cleveland practiced law in Buffalo before becoming Erie County sheriff, Buffalo mayor and governor of New York. He married Buffalo’s Frances Folsom. In 1901, William McKinley was assassinated at the Pan-American Exposition in Buffalo and, on Sept. 14 of that year, Theodore Roosevelt was sworn in at the Wilcox Mansion as the nation’s 26th president.

Once heavily forested frontier, the region changed as the Erie Canal brought prosperity and made the Niagara Frontier one of the largest shipping and rail centers in the country.

Erie County is home to numerous inventors and inventions – the Ball canning jar, Barcalounger and air conditioning all originated in Buffalo. Wilson Greatbatch developed the implantable pacemaker in Clarence, and Bell Aircraft was one of the nation’s largest suppliers of aircraft during WWII.