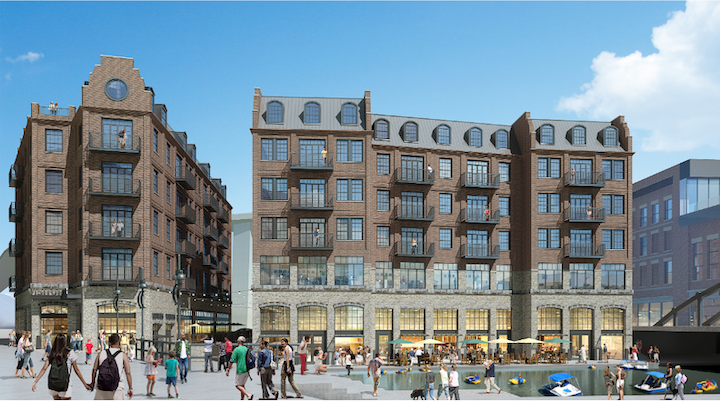 (Image courtesy of the Office of Gov. Andrew M. Cuomo)

Start of construction for Heritage Point at Canalside in Buffalo

Gov. Andrew Cuomo on Tuesday announced the start of construction for Heritage Point on the South Aud Block at Canalside in Buffalo. The project includes two approximately 103,000-square-feet mixed-use buildings separated by an open walkway that follows a portion of the historic Prime Slip. The $30 million project will be complete in fall 2022. See renderings here.

"Downtown Buffalo's waterfront revitalization continues to gain steam, and the Heritage Point project adds a residential component for the first time, along with retail and restaurants to attract visitors to what will be a dynamic community and destination," Cuomo said. "Our ongoing investments in Western New York have helped to transform neighborhoods and economic sectors across the region, forever changing the landscape in ways few would have thought possible just a decade ago.”

Lt. Gov. Kathy Hochul said, "Canalside has become a year-round destination generating much enthusiasm and attracting worldwide attention. Heritage Point's mixed-use purpose will add a new vibrancy to Canalside and is another milestone in the rebirth of Buffalo's historic waterfront. New York continues to capitalize on the bold and audacious legacy of the Erie Canal and build back better for a post-pandemic future."

Sinatra & Company Real Estate LLC founder and CEO Nick Sinatra said, "Sinatra and Co. is excited to bring this premier live, work, play project to Canalside. We know that the significant vision and investment by ECHDC into Canalside have made it the most prominent destination for entertainment, tourism and recreation. With the growing momentum in this area, we predict this project will be a great complement to the growing private, public, tech synergy there.”

With 103,000 gross square-feet of space, the mixed-use buildings include up to five floors with an active ground-floor plan that includes retail and restaurants. The remaining floors include office space and a total of 64 mixed-income residential units. The Prime Slip will be evoked through a pedestrian pathway over its former alignment, where it historically linked the Erie Canal with Lake Erie. The pathway will allow visitors to explore the area while simultaneously educating the public on the significance of the Prime Slip to the Erie Canal's history. The developer will also activate the towpath, sidewalks and Prime Slip with outdoor seating. These primarily vacant parcels are part of a former superblock that once contained War Memorial Auditorium, a sports and events arena that was demolished by ECHDC in 2009.

ECHDC Chairman Robert Gioia said, "This new construction will further activate Canalside and diversify the neighborhood's offerings, attractions and opportunities, while retaining historic components of the site. Heritage Point will add new residential space, which will serve to increase the livelihood of the adjacent downtown district and fuel further economic growth.”

Congressman Brian Higgins said, "This is an exciting new phase of progress, adding new recreational and residential opportunities to Canalside. Through this collaboration, public investments are made in the infrastructure and public spaces, with private investments in the historically inspired buildings, making for a destination that is uniquely Buffalo.”

Assembly member Jon Rivera said, "The development at Canalside over the last decade is nothing short of amazing, and Heritage Point will continue to build on the renaissance of Buffalo's waterfront. The project helps create a place where people can truly live, work and play. Something will always be going on and that's sure to be an economic driver for the area.”

Erie County Executive Mark Poloncarz said, "This project embraces extraordinary planning and an innovative strategic vision for one of the best entertainment and recreational locations in Western New York. The commitment being shown by a private company combined with bold leadership from New York state will help continue to welcome new opportunities for economic development in the City of Buffalo and the region as a whole."

Sinatra and Co. is a land development and real estate firm founded in Buffalo in 2009. The company owns and operates more than $550 million in real estate across five states. In Buffalo, the firm is comprised of over 75 professionals working on over $150 million in real estate development, including historical adaptive reuse. Recent development projects include 945 Kenmore, a ground-up, mixed-use project that employed state brownfield cleanup methods; and the Phoenix Brewery Apartments, an adaptive reuse historic project on the Buffalo Niagara Medical Campus. Nearing completion is Mid-City Apartments, a workforce housing project. Sinatra & Company is also working on the adaptive reuse of the former Women's & Children's Hospital of Buffalo with partner Ellicott Development.

As a subsidiary of Empire State Development, the state's chief economic development agency, the Erie Canal Harbor Development Corp. supports and promotes the creation of infrastructure and public activities at Canalside, the Ohio Street corridor and the Outer Harbor. For more information on ECHDC, visit here.