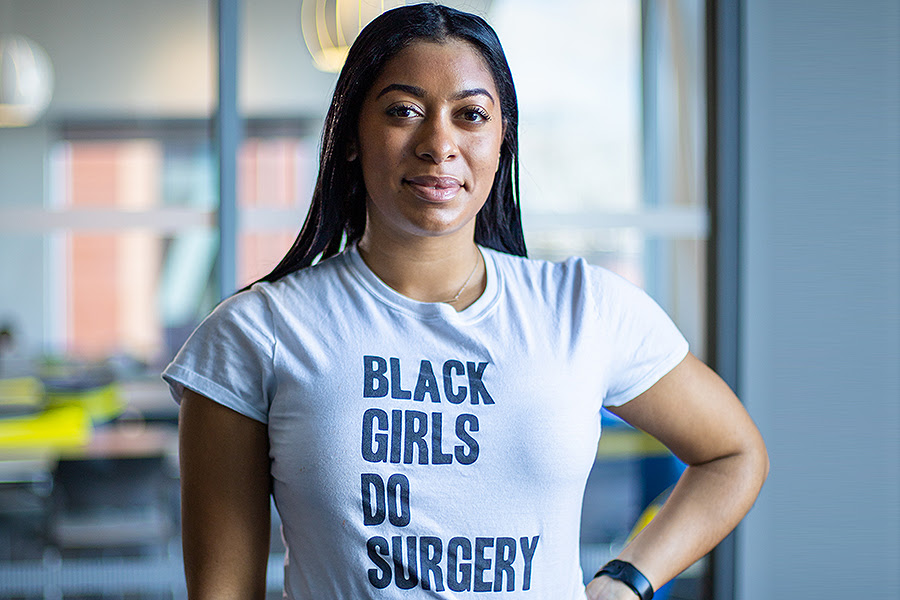 How to celebrate resilience after traumas of past year? UB medical student finds answer in launching a company

It’s not like Karole Collier needed something else to occupy her time: She had finished the grueling rounds of interviews that determine where she’ll train as a surgery resident; she was starting her final semester of medical school at the University at Buffalo; she was working on a new UB summer program for underrepresented students; and she played a major role in organizing an antiracism lecture program featuring activist and scholar Cornel West.

That was all this year; and yet, she still wanted to do more. She felt she needed to somehow mark the extraordinary circumstances of the past year, when a global pandemic devastated minority communities, and the nation began a traumatic reckoning with racism at all levels of society.

“It’s not a regular year to graduate. So much has happened; there have been so many insurmountable obstacles,” said Collier, a member of the Class of 2021 in the Jacobs School of Medicine and Biomedical Sciences at UB.

Earlier this month, she launched Twiceashardapparel.com, her line of T-shirts, hooded sweatshirts, hats and mugs branded with powerful statements about medicine and activism. The name refers to the fact that, according to the company website, “Black and brown physicians have found themselves having to ‘work twice as hard’ to be a doctor, community pillar and champion of the ways in which health disparities affect our patient population.”

That was especially true this year, when evidence of the “minority tax” became strikingly clear as underrepresented people have found themselves called upon to take leading roles in antiracism activities.

“You don’t get to be a physician of color and not engage in these conversations,” Collier said. “The paucity of diversity has made us, the medical students, the ones that our community goes to on so many issues. For example, to mitigate vaccine hesitancy. We play so many different roles.”

These demands come in addition to the fact that medical students of color are still living the realities of racism in society, in general, and medicine in particular. “It’s exhausting to be living in minority status,” Collier said. “There are all these outrages happening every single week. It was in this moment of repeat offenses that I wanted so desperately to have something celebratory to show strength and resiliency.”

A New Look for Rod of Caduceus

A casual remark from a friend about Collier’s penchant for wearing crazy T-shirts and her personal interest in art and design prompted her to explore how she might express and also celebrate the difficulties of the preceding year.

She needed a design that could convey that complexity.

“I wanted to start with something identifiable about having pride in African American heritage and activism,” she said.

She chose the Black fist, the traditional Black power symbol, and combined it with the rod of Caduceus, the traditional symbol of medicine. She selected black, green and red to reflect the colors of the Pan-African flag. From that initial design, Collier developed a line of hooded sweatshirts, T-shirts, hats and mugs. They bear a range of phrases including:

With Match Day coming up on March 19, Collier saw it as the perfect occasion for her and classmates to make a statement with what they are wearing – an occasion when they won’t be wearing their scrubs or white coats. Match Day is when medical school graduates find out where they will do their post-graduate training, called a residency, which lasts from three to seven years depending on the specialty they choose.

“I wanted to have something to wear on Match Day that would speak about who I was and what I and others had gone through,” she said.

The launching of her own company seems a fitting conclusion to the activism that has characterized Collier’s medical school career. In her first year at UB, she played a key role in establishing UB’s Second Look weekend, now an annual event, which gives accepted, underrepresented students a chance to take a closer look at the Jacobs School.

Collier has participated in numerous community efforts highlighting and addressing health disparities. She has served as president of the UB chapter of the Student National Medical Association (SNMA), the nation’s oldest and largest organization focused on the needs of medical students of color, and on the school’s diversity and inclusion committee.

And while starting a company puts even more responsibility on her shoulders, Collier has found her entrepreneurial activities immensely rewarding.

She talked about the powerful symbols, such as the rainbows of the LGBTQ movement, which are now synonymous with the struggles of other marginalized peoples.

“I say, ‘Why can’t we have something equally celebratory and empowering?’ ” Collier asked. “I wanted to create something uniquely for me and for others who find themselves at this intersection where they want to be activists, but also want to celebrate their struggle.”