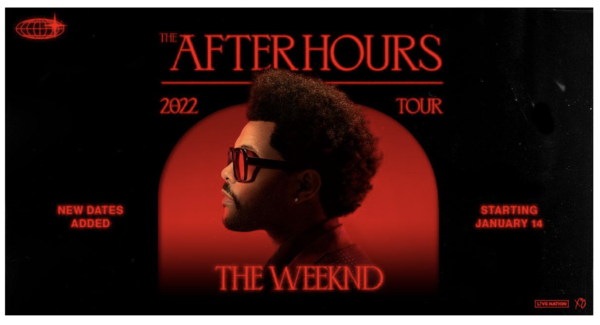 The Weeknd is headed back out on tour in 2022. (Image courtesy of Scoop Marketing)

The worldwide tour announcement comes just days ahead of the multi-Platinum singer’s headlining Super Bowl performance, and also includes a handful of rescheduled dates shifting from 2021 to be a part of the “After Hours World Tour” in 2022.

With the addition of 39 new tour dates, The Weeknd will also release “The Highlights” on Friday, Feb. 5. The collection is a way to present some of The Weeknd’s most notable works in one place. While this isn’t a “Greatest Hits” album, his team said, it does provide a new listener a rich foray into some of the iconic artist’s best and favorite work.

Fans can presave and preorder the album HERE.

The Weeknd’s partnership with Verizon continues with the announcement of this tour. Members of the Verizon customer loyalty program, VerizonUp, will receive access to this tour. Tickets will be available in the MyVerizon app closer to the date of each event.

“After Hours World Tour” local and notable 2022 dates include:

The Weeknd’s April 7 performance next year is the first concert announced and first to go on sale for the new UBS Arena. Currently under construction, the $1.1 billion, first-class multipurpose venue will be one of the most modern and innovative in the world, as well as the new home to the New York Islanders.