Beverly Rose Boyle, 92, a resident of Grand Island for 59 years, passed away peacefully after a short illness at the Kinzua Healthcare and Rehabilitation Center in Warren, Pennsylvania, on Wednesday, Sept. 16, 2020.

Born Oct. 1, 1927, in Horseheads, New York, she was the oldest daughter of Burnadean Buckley Stein and John Reuben Stein. She worked as a stenographer briefly in the 1940s then became a World War II veteran’s wife and raised her family. They were married in Waverly, New York, on May 16, 1946, 24 days after his discharge from the U.S. Navy. She coordinated several annual USS Alderamin (AK-116) reunions from 1996-2009 and attended them all with her proud Navy husband. She enjoyed bowling, camping with her family, spending time at their cabin in Belmont, New York, and was an accomplished artist after her retirement. She loved traveling the United States with her husband in their motor home and logged over 69,000 miles.

Beverly had five children: John R. Boyle, who died shortly after birth in 1949, Mark D. Boyle of Warren, Pennsylvania, Dana J. Boyle (Jane) of Grand Island, Lance C. Boyle (Judy) of Williamsville, and Nanci E. Backlund of Grand Island; eight grandchildren: Michael Backlund (Ashley), Laura Backlund, Jessica Backlund, Katie Boyle of Olean, Lindsey Lucatra (Mike), Steven Boyle (Katelynn) of Grand Island, Dawn Hurley (Brian Lango) and Jason Fisher (Terry); and six great-grandchildren: Leo, Madison and Jacob Hurley, Brantley Jones, Michaela Lucatra, and Easton Backlund, along with many nieces, nephews and their respective spouses and families. In addition to her parents, Beverly was preceded in death by her husband of 68 years, Dana Cortright Boyle, whom she married on May 16, 1946, in Waverly, and who died on Sept. 12, 2014; and her dear sister and partner in crime, Gloria Walthers of Florida.

A private family dinner will be held at the convenience of the family. Burial will be in the Fairlawn Cemetery in Scio, New York. Arrangements have been entrusted to the Donald E. Lewis Funeral Home Inc., 304 East St., Warren, Pennsylvania. Email condolences may be sent by visiting www.lewisfuneralhomeinc.com. 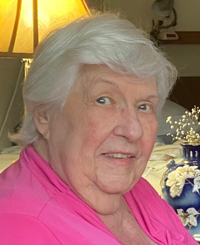