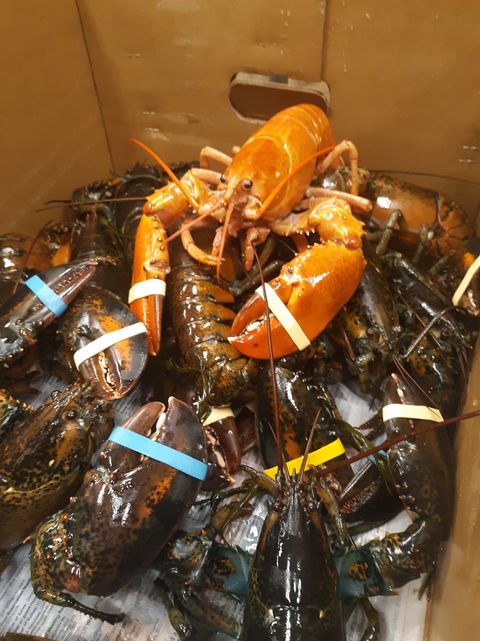 The Aquarium of Niagara will welcome an orange lobster into its animal collection after it arrived in a seafood shipment to Tops Friendly Markets on Transit Road in Lockport.

A representative from the seafood department reached out to the aquarium on Saturday, Sept. 5, after discovering the brightly colored crustacean.

“My assistant manager opened the box, looked at him, and thought, ‘Who put a cooked lobster in with the regular lobsters?’ ” said Tops Friendly Markets Seafood Manager Margie McKenzie. “She did a Google search and realized orange lobsters are pretty rare. We just want him to have a permanent home and not end up on someone’s dinner plate.”

The lobster, dubbed “Larry,” is estimated to be between 5-7 years old and weighs 1.3 pounds. He came to Western New York by way of Boston after he was caught in Maine. He is currently residing in the Tops seafood department and is expected to come to the aquarium next week.

The orange lobster will join the venue’s other uniquelycolored lobster, “Blue,” who came to the aquarium from Wegmans on Military Road in Niagara Falls back in 2011. Both lobsters will act as ambassador animals for their species, participating in outreach and other educational events at the aquarium and beyond. Ambassador animals play a key role in fulfilling the aquarium’s mission of inspiring people to make a difference for aquatic life.

“We have seen that our visitors have become increasingly less interested in goods and services, and instead seek out interactive experiences,” said Aquarium of Niagara Executive Director Gary Siddall. “Ambassador animals provide educational and inspiring experiences that inspire future scientists and foster a desire to protect the aquatic world.”

Lobsters are most commonly dark colored with a blue-green green-brown hue, but they can be found in colors such as blue, red, yellow, albino (white), orange or even calico.

According to the National Oceanic and Atmospheric Administration, American lobsters can live upwards of 100 years. The largest lobster ever caught weighed about 45 pounds.

The Aquarium of Niagara is located at 701 Whirlpool St., Niagara Falls.