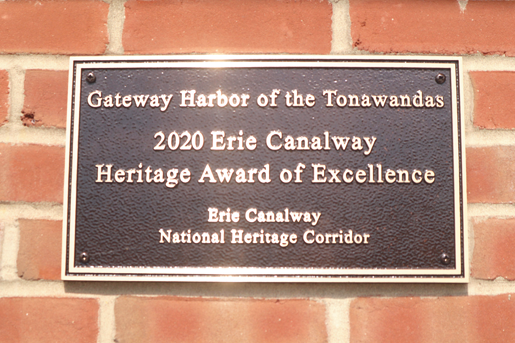 On Tuesday, local officials from North Tonawanda and Tonawanda, along with representatives from the Erie Canalway National Heritage Corridor, came together to unveil a bronze plaque in recognition of the Gateway Harbor of the Tonawandas winning the 2020 Erie Canalway Heritage Award of Excellence.

“This plaque behind me is a symbol of our recognition and acknowledgement of all your hard work to invest in your waterfront, and to make this a destination that makes everybody within the Erie Canalway National Heritage Corridor proud.” Radliff said.

Radliff praised the work local officials and organizations have done over the last decade and a half to revitalize the Gateway Harbor area.

“I have had the pleasure of working along a 500-mile corridor, and seeing all the wonderful work that’s done from Albany to Buffalo, and I can tell you that efforts that you’re putting forth here right now are extraordinary,” Radliff said.

Elsewhere, Radliff called the location “incredibly strategic” and said, “The canal has brought your communities together, and we’re looking forward to working with you … to find the resources to carry out the vision that you want to pursue. Your vision is our vision, and our vision is to invest and preserve the extraordinary heritage of the Erie Canal system – to celebrate it, share it, and to promote places like the Tonawandas as world-class destinations.

During his time at the podium, Mayor Davis reflected on the partnership between the two cities, and how that relationship has helped improve the Gateway Harbor to where it is today.

“Our two cities have been working hand-in-hand together to really bring both of our downtowns into a destination. People want to come spend some time and spend money. You don’t have to look any further than what NT has done on their side and what we’re trying to accomplish on our side, to appreciate all the efforts, from everybody previous to me, previous to Mayor Pappas, that have gone into making this possibility into a realization. Hopefully, we can use this to leverage some additional funding to help promote the Twin Cities moving forward.”

Pappas said he and other North Tonawanda officials were humbled and proud to receive the award. He thanked Davis for the partnership the two cities have shared throughout the project and spoke on the potential for the area going forward.

“There’s so much that has gone into this by all concerned, and both cities have benefited from the Gateway,” Pappas said, adding, “With our location, and both cities being in a position where visitors can come and actually go to a downtown of two cities, within a 30-second walk across a bridge, and enjoy the businesses and the sights, and then within a five minute drive, be at the river. … There’s so much potential here and it’s been recognized by the National Heritage Corridor. … We’re so proud of the two cities working together to accomplish what is being accomplished and there’s a lot more to come.”

Michael Zimmerman, executive director, Lumber City Development Corp., also took a moment to thank Gateway Harbor organization for its work in helping to organize and facilitate the events and concerts that enliven the area every summer.

“So much of the great things that are happening here on the canal, they happen on both sides, and the organization that really pulls all that together is the Gateway Harbor’s organization … Gateway Harbor is that group that bridges those two cities and puts on all the events down here and does a great job.”

After the presentation, the two mayors talked about some of the ongoing and upcoming projects in the area between the two cities they hope will continue the area’s revitalization.

Pointing out the construction across the harbor on Young Street, Davis cited the $2.5 million Empire State development funding deal that he said will hopefully turn Young Street into a regional destination for food trucks and festivals.

Mayor Pappas added, “We have a similar thing going on on our side. All of Webster Street is practically being redone… and is going to go all the way through our main section – and it all hooks up together right over the bridge with the city of Tonawanda. So, it’s like one thoroughfare right through from one side to the other.”

It seemed fitting that the two cities were honored for their partnership and collaboration at a time when, in a normal year, they would be co-hosting Canal Fest. Unfortunately, due to COVID-19, that festival was shelved back in April. When asked how it felt to be celebrating that partnership Pappas said, “The two cities, regardless of what goes on, or what doesn’t in terms of activities and Canal Festival concerts, we’re together we’re united as sister cities and we work together closely.” 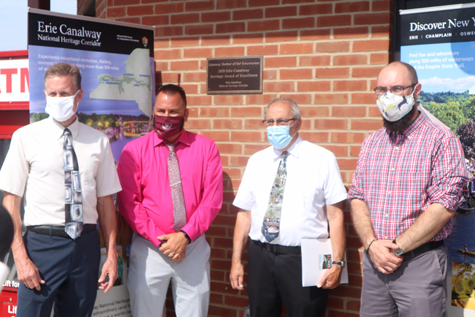