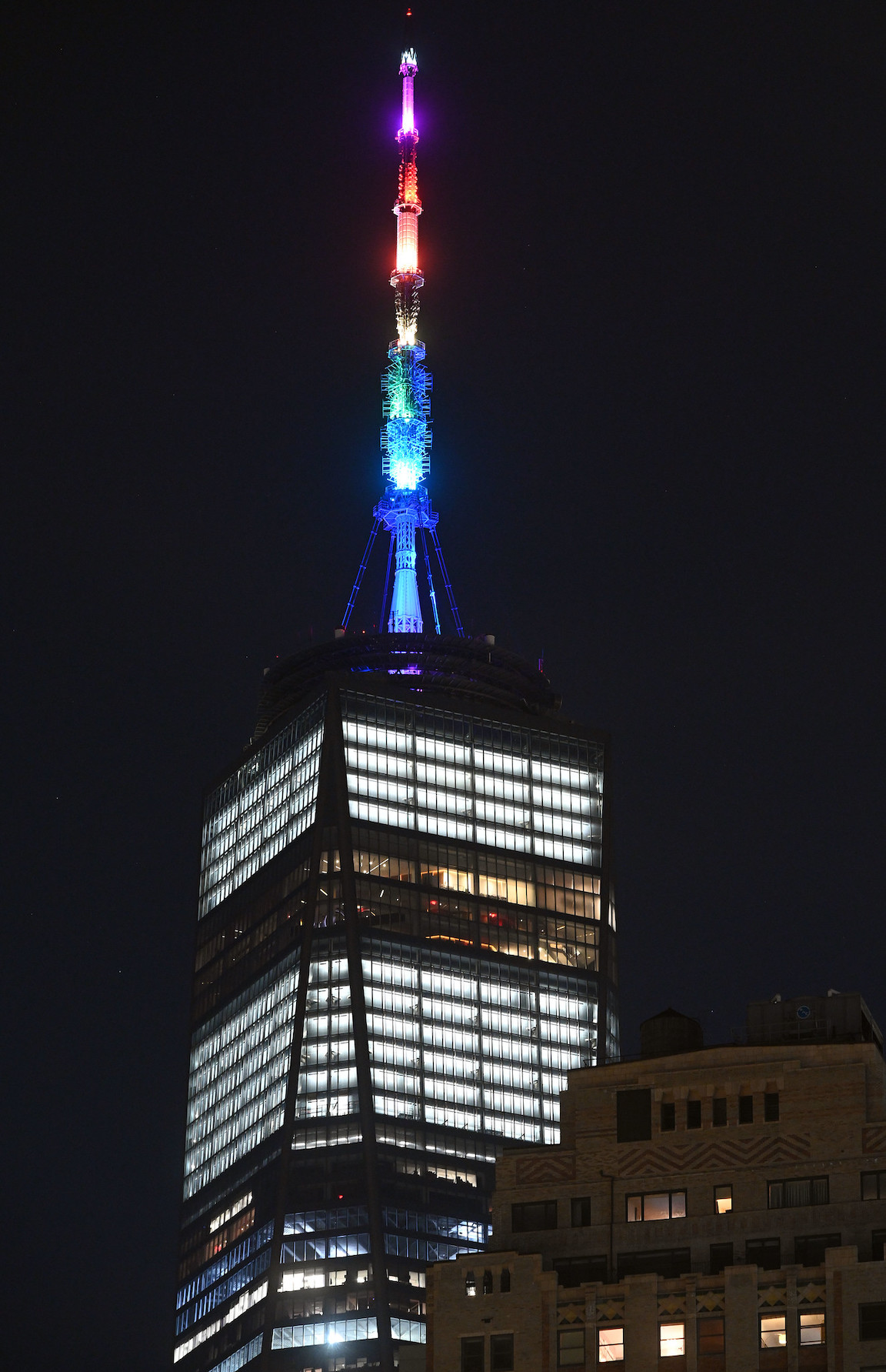 Gov. Andrew Cuomo announced landmarks across the state would be lit in honor of Pride Month and the LGBTQ community, including the spire of One World Trade Center (shown here), the Pershing Square Viaduct, the Kosciuszko Bridge, the Governor Mario M. Cuomo Bridge, the Mid-Hudson Bridge, the marque at the front of Whiteface Lake Placid Olympic Center, the SUNY Central Administration Building, the State Education Building, the Alfred E. Smith Building, Niagara Falls and the State Fair Exposition Center and LED boards featured at the State Fair main gate. The landmarks were illuminated in the colors of the Pride flag in celebration of Pride in New York and the 50th anniversary of the first Pride march in New York City. (Photo by Kevin P. Coughlin/Office of Gov. Andrew M. Cuomo)

The governor announced an action by the New York State Department of Financial Services to further protect LGBTQ New Yorkers from discrimination in health care as he said the federal government continues to remove or erode these protections.

"As we look back on this year's Pride Month and celebrate the 50th anniversary of the first Pride march in New York City, we must reaffirm our commitment to the LGBTQ rights movement and stand together as one with the LGBTQ community and our veterans," Cuomo said. "Restoring state benefits to LGBTQ veterans who were denied honorable discharge simply for being who they are is the right thing to do and an appropriate way to show our appreciation for their service to this country. New York continues to lead the way on equality and justice, and as communities across this nation are rallying for urgent reforms we must continue to build on our progress including by repealing the discriminatory 'walking while trans' statute that invariably hurts transgender people of color."

Rolling applications are open for veterans who were denied an honorable discharge because of their sexual orientation or gender identity to have their New York state veterans' benefits restored. Signed by the governor last November, the Restoration of Honor Act restores benefit eligibility for veterans who received less than honorable discharges as a result of military sexual trauma, traumatic brain injury, or post-traumatic stress disorder, as well as because of other exclusionary policies such as "Don't Ask, Don't Tell.”

A press release said, “These discharges impact veterans' lives even when they return home and often make it difficult or impossible to access many veterans' benefits. The Restoration of Honor Act makes New York a national leader in restoring the benefits of veterans who received less than honorable discharges either because of these traumas or because of their LGBTQ identity.”

The press release noted, “Throughout his time in office, Gov. Cuomo has been a national leader in championing LGBTQ rights and has fought back against the federal government's ongoing attacks against the LGBTQ community, including the military's ban of transgender soldiers and the rollback of health care protections for LGBTQ people. Earlier this year, Gov. Cuomo signed legalized gestational surrogacy into law, helping LGBTQ couples and couples struggling with infertility grow their families. Last year, Gov. Cuomo signed into law the Gender Expression Non-Discrimination Act, legislation banning the deplorable practice of conversion therapy, and the overdue gay and trans panic defense ban. This month, we celebrate the ninth anniversary since Gov. Cuomo signed the Marriage Equality Act, when New York became the first large state in the nation to enact marriage equality.

At the Human Rights Campaign Greater New York Gala in February, Cuomo announced his support for repealing New York Penal Law Section 240.37, also known as the "Walking While Trans" statute, so that people will no longer be targeted for who they are or what they look like.

The press release explained, “Under this outdated, overly broad, and discriminatory loitering statute, transgender women, particularly transgender women of color, have been disproportionately policed for innocent and lawful conduct, such as standing on the sidewalk or going about their daily lives.”

Over the weekend, the governor also issued a new executive order that makes New York employees who voluntarily travel to high-risk states after June 25 ineligible for COVID-19 paid sick leave.

Consistent with Cuomo's recently announced mandated quarantine of all incoming travelers from hotspots around the country, employees will forgo their paid sick leave benefits from New York's COVID-19 paid sick leave law if they engage in nonessential travel to any state that has a positive test rate higher than 10 per 100,000 residents, or higher than a 10% test positivity rate over a seven-day rolling average. This provision does not apply if the employee travels for work or at the employer's request.

The provision included in executive order 202.45 mirrors the law's existing provision that makes New Yorkers ineligible for paid sick leave if they travel to any country designated as having a level two or three travel health notice from the Centers for Disease Control and Prevention.

On Sunday, Cuomo announced New York state's lowest death toll and hospitalizations due to COVID-19 since the pandemic began. There were five deaths and 869 hospitalizations in New York on Saturday. The number of new cases, percentage of tests that were positive and many other helpful data points are available at forward.ny.gov.

"As states across the country struggle with new outbreaks related to reopening, New York's numbers continue to go down to record lows," Cuomo said. "Our progress is a direct result of New Yorkers' discipline and hard work and an incremental, data-driven reopening. Yesterday, as our hospitalizations dropped below 900, New York had its lowest single-day death toll since March 15. While today's numbers are very encouraging, New Yorkers must remain vigilant or the numbers will shoot right back up. Be smart, wear a mask, stay ‘New York Tough!’ "

Sunday’s data is summarized briefly below:

Of the 61,906 tests conducted in New York yesterday, 616, or 0.99%, were positive. Each region's percentage of positive tests over the past three days is as follows: