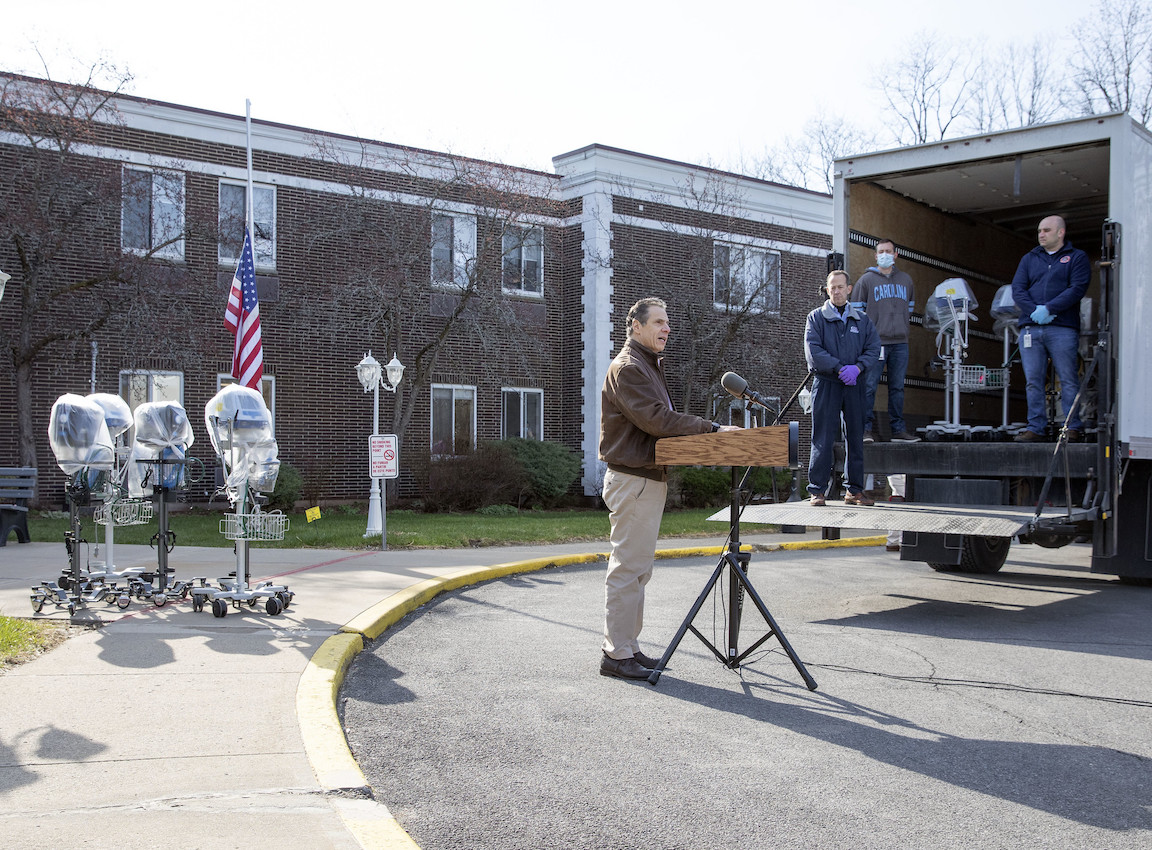 On Easter Sunday, Gov. Andrew M. Cuomo returned ventilators to the Pathways Nursing Home and Rehabilitation Center in Niskayuna. Pathways Nursing home made an unsolicited contribution of these lifesaving machines to New York state as part of the ongoing efforts against COVID-19. The governor also delivered cookies baked by his daughters for staff and nursing home residents.

“We are in Niskayuna this morning, which is right outside of Albany. We are at the Pathways Nursing and Rehabilitation Center. And I came to say happy Easter and happy Passover. Most of all, thank you," Cuomo said.

“We're going through a difficult time here as everybody knows. We've seen a lot of pain, a lot of loss. Again last night we lost hundreds of New Yorkers to this terrible disease. It's been disorienting. Everybody is suffering on a lot of levels. People are afraid, people are anxious. They're under stress everywhere they turn. Normally you go home for solace, you go home for peace, but it's even difficult at home in this period with so many questions. So, a lot of pain, a lot of suffering. But also, when things are at their worst, sometimes people are at their best. Sometimes just when you need it, people can really show you how great they can be.

“In the middle of this situation, we were worried about the hospital capacity, especially in downstate New York. That we would overwhelm the hospital system. The key piece of equipment that we needed were ventilators. This disease attacks the respiratory system, so people need ventilators. They needed many more ventilators than we actually had. So, we talked about sharing our ventilators among different hospitals, different parts of the state, because the virus doesn't attack the entire state, it attacks with more intensity in certain places.

“Out of the blue one day, I got a call that said there's a nursing home in upstate New York that wants to lend 35 ventilators to downstate New York. It was unsolicited, nobody called and asked. In some ways, it was the last place that you would think would come forward, because it was a nursing home. Nursing and rehabilitation center and we're most worried about nursing homes because the vulnerable population, they are in nursing homes.

“And that a nursing home would come forward, unsolicited, gratuitously, and say we want to lend 35 ventilators in case our neighbors downstate need them. What an incredibly beautiful, generous gesture. I want to say thank you on behalf of all of the people of the state. The family of New York we talk about. We talk about that we're a family, upstate, downstate, we're all one family. That family is there to support one another and I want to say thank you on their behalf.

“But I also want to say thank you, personally. I also want to say thank you on a personal level, because this hasn't been easy for anyone, but I want the team here and the people at Pathways to know that they gave me an inspiration and they gave me energy and they gave me resolve. Their gesture was so beautiful and so kind and so symbolic of everything we want to be at our best. Everything we aspire to be. Everything we're all trying to be. Listen to our better angels. Be better, be more generous, more gracious, more loving. Get to that level. That's what Pathways did and they did it for me and I wanted to say thank you very much. Thank you and God bless you.”