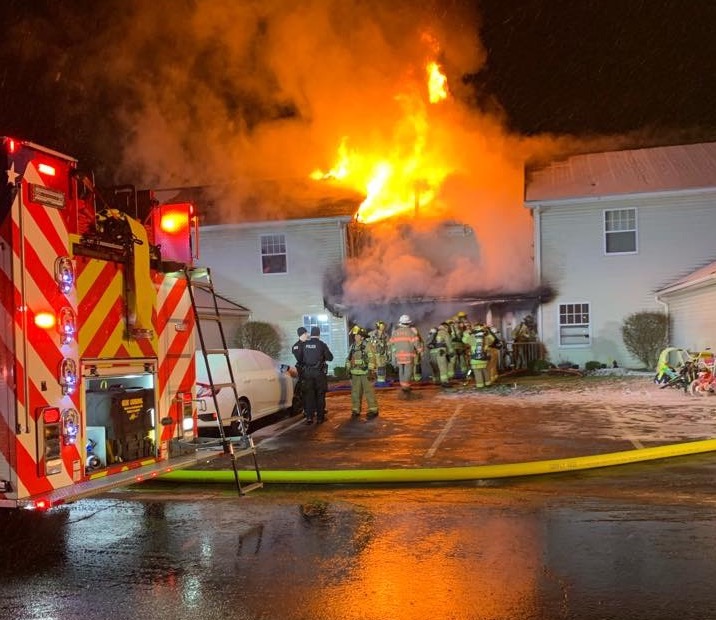 At 10:33 p.m. Saturday, Lewiston Fire Co. No. 1 was dispatched to the Woods at Blairville apartment complex in the 800 block of Oriole Lane for a reported structure fire. Crews were faced with heavy fire in two apartments upon arrival and immediately deployed to begin knocking back the flames as additional crews entered to search for anyone still inside.

The fire was knocked down quickly with what the fire company called “fast and efficient teamwork by all companies involved.” During operations, two patients were identified and a dog was rescued from an adjoining apartment and reunited with its owner.

One female resident suffered burns and airway injuries when attempting to put out the fire. She was transported to ECMC by Lewiston 1. Another resident was transported to Mount St. Mary’s Hospital for minor smoke inhalation. Two apartments were completely destroyed while other apartments suffered smoke damage. No firefighters were injured during the incident.

Investigators from the Town of Lewiston Fire Prevention Bureau and Niagara County Origin & Cause Teams were on location to determine the cause of the fire.

Additional engines from Upper Mountain Fire Co., Youngstown Fire Co. and Ransomville Fire Co., along with a ladder truck from Niagara Active Hose, were dispatched immediately due to the large complex.

Lewiston 1 would also like to thank the Wilson Fire Co. and Lewiston Fire Co. No. 2, who were placed on fire standby. Also, Youngstown and Tri-Community Ambulance, who were brought in to provide EMS coverage while both Lewiston No. 1 ambulances were transporting the patients.