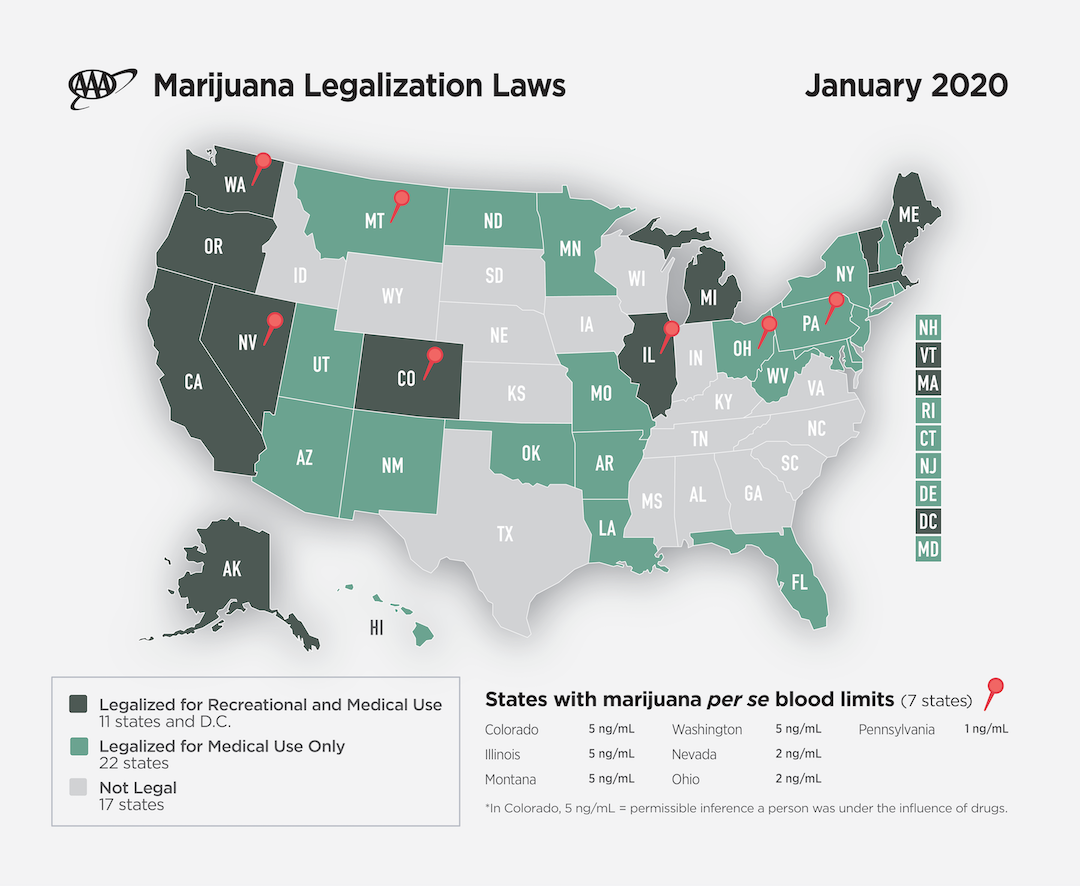 A concerning number of Washington state drivers involved in fatal crashes are testing positive for recent use of marijuana, according to new research from the AAA Foundation for Traffic Safety.

The share of drivers who, after a fatal crash, tested positive for active THC – the drug’s main psychoactive ingredient – has doubled since the state legalized marijuana in December 2012. AAA believes the increase raises important traffic safety concerns for drivers across the country, because recreational marijuana use is now legal in 11 states and Washington, D.C.

The latest AAA Foundation research found that, between 2008 and 2012 – the five-year period before the drug was legal – an estimated 8.8% of Washington drivers involved in fatal crashes were positive for THC. That rate rose to 18% between 2013 and 2017.

The average number of THC-positive drivers increased, too. In the five years before legalization, an average of 56 drivers involved in fatal crashes each year were THC-positive. In the five years after legalization, the average jumped to 130. The new numbers bolster the findings of a similar report the AAA Foundation released in 2016. The study did not attempt to determine if marijuana contributed to the crashes included in its latest research. It focused only on the prevalence of drivers who tested positive for active THC.

“This study enabled us to review a full 10 years’ worth of data about the potential impact of marijuana on driving safety – and it raises significant concerns,” said Dr. David Yang, executive director of the AAA Foundation for Traffic Safety. “Results from the analysis suggest that legalization of recreational use of marijuana may increase the rate of THC-positive drivers involved in fatal crashes.”

Marijuana use can inhibit concentration, slow reaction times and cloud judgment. Its effects vary by individual, but a number of studies have concluded that marijuana use impairs the ability to drive safely. Previous research suggests users who drive high are up to twice as likely to be involved in a crash.

AAA opposes the legalization of marijuana for recreational use, because of its inherent traffic safety risks and because of the difficulties in writing legislation that protects the public and treats drivers fairly.

Eleven states and Washington, D.C., have legalized marijuana for both recreational and medical use. Another 22 states have legalized it for medical use only. State legislative sessions for 2020 are getting underway and recreational use is expected to be a popular topic. The legislative interest combined with likely November ballot measures could result in additional states taking a hard look the issue.

In an attempt to curtail drug-impaired driving, seven states have set legal non-zero, or “per se,” limits on the amount of THC drivers can have in their system. While well-intended, AAA believes imposing such limits is problematic, because no data reliably shows what level of THC impairs driving, the chemical’s effects vary by user, and THC testing often cannot be done until hours after a crash.

AAA believes states that have legalized the drug should not rely solely on an arbitrary legal limit to determine if a driver is impaired. They should adopt a two-pronged approach that requires:

•A positive test for recent marijuana use

Regardless of the drug’s legal status – and limits in any state – all motorists need to avoid driving while impaired.

Last year, a foundation survey found nearly 70% of Americans think it’s unlikely a driver will get caught by police for driving shortly after using marijuana. The survey also revealed an estimated 14.8 million drivers report getting behind the wheel within one hour after using marijuana in the past 30 days.

About AAA Foundation for Traffic Safety

Established in 1947 by AAA, the AAA Foundation for Traffic Safety is a nonprofit, publicly funded, 501(c)(3) charitable research and educational organization. The AAA Foundation’s mission is to prevent traffic deaths and injuries by conducting research into their causes and by educating the public about strategies to prevent crashes and reduce injuries when they do occur. This research is used to develop educational materials for drivers, pedestrians, bicyclists and other road users. Visit www.AAAFoundation.org.