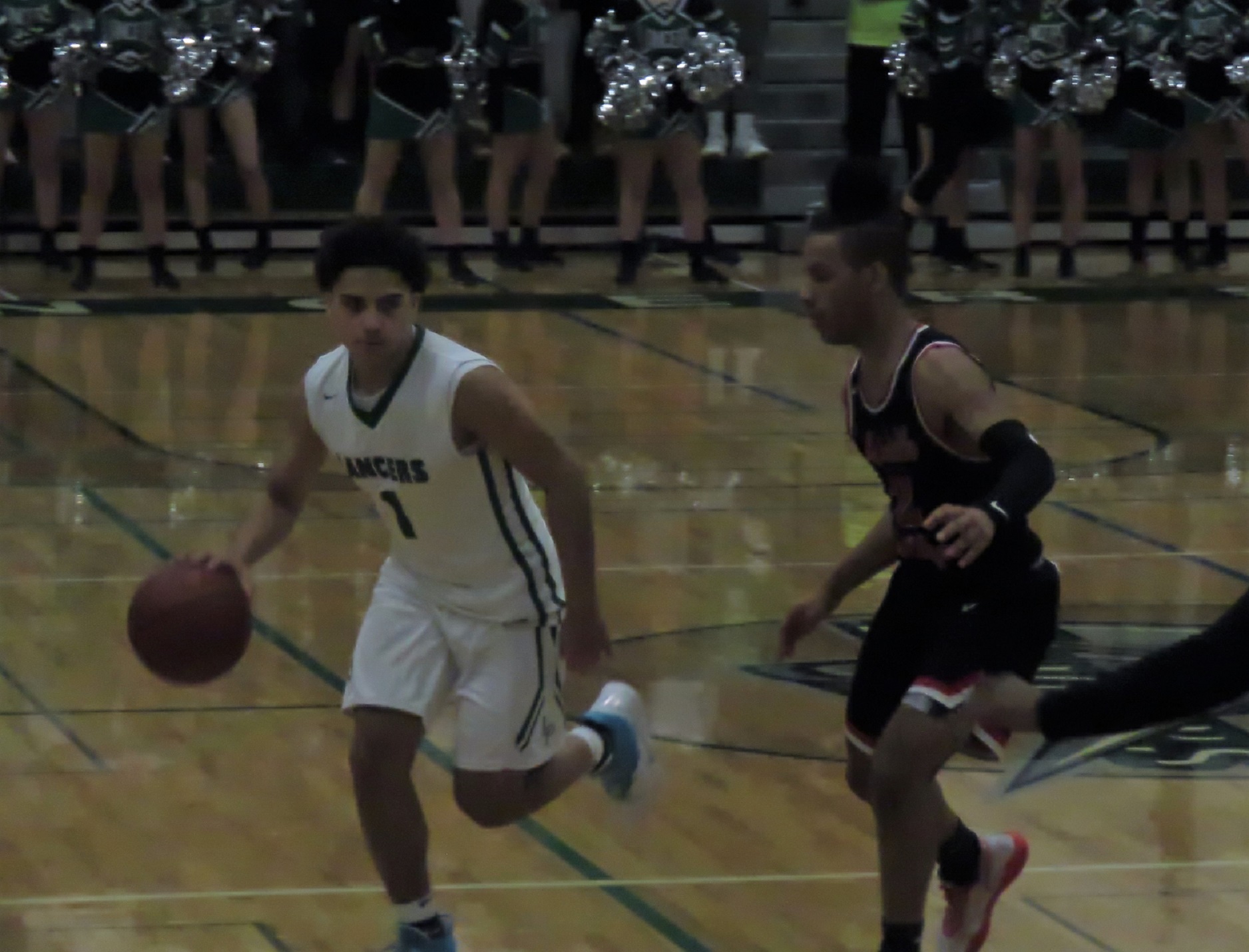 Lancers fight till end versus one of NYS’s best

Despite a physical and highly contested battle, the Lancers fell versus New York’s No. 4 team in Class C, 72-69.

The Kats provided a big test to L-P, but the Lancers never faced a deficit higher than 10 and lead on separate occasions.

The first quarter was a back-and-forth duel to begin. Freshman Jalen Duff led the offense early with six points in the frame, while Mehki Starks added five. The Lancers and Kats were tied after one, 14-14.

Both offenses struggled to gain any traction in the second quarter.

Lancers sophomore Roddy Gayle nailed a 3-pointer to start the frame and give his team the lead, but MEC’s Devonte Prince followed with a four-point play, nailing a trey and finishing the and one.

Gayle scored nine of the Lancers’ 11 second quarter points, giving L-P a 25-23 lead, but MEC’s Keyunte Jones nailed back to back 3-pointers to finish the half, securing a 29-25 Kats lead.

In the second half, Jamond Jones and the Kats attempted to make a run to put the Lancers away. The senior nailed two treys and 2-point jumper to start, but Gayle was there to answer every bucket and keep the score close.

Lew-Port’s Mehki Starks followed with a layup to tie the game, but a Prince bucket ended the third quarter with MEC in front, 51-49.

In the final eight minutes, MEC went for the knockout punch early. Anthony Smith scored five of his 12 points to begin the quarter and Jamond Jones added two buckets to catapult a 9-1 run. The breakout extended MEC’s lead, 60-50.

Gayle, who had a career night, wouldn’t let the Lancers go down easy.

Everything wasn’t perfect for Gayle, though, as the game was physical and bruising … literally.

With 4:41 to go, Gayle and Prince bumped heads for a second time, sending Gayle back to the locker room with a cut, while Prince was also banged up and laying on the floor. The mishap caused a delay of around 10 minutes, as the custodial crew cleaned up the court and players used towels to dry the hardwood.

Following the delay, Gayle stormed back wearing a headband and a new jersey with the No. 33. Gayle’s normal No. 24 could not be put back on due to blood stains.

Gayle wasn’t the only Lancer to switch jerseys either, as Duff, just minutes later, was cut. Duff switched from the No. 1 to No. 30.

Late in the game, Joe Beatty was able to cut the Kats’ lead to 66-65, but Jamond Jones, who scored 18 of his 20 points in the second half, iced the game with a nothing-but-net step back 3-pointer.

The Kats struggled handling the ball late, leaving the Lancers chances, but L-P couldn’t find the bucket to get closer, resulting in a 72-69 final.

The Lancers (8-4) were led by Gayle, who dropped a game-high 38 points. Additionally, Duff added 15, Starks had 7, Beatty notched 5 and Jack Bernstein chipped in 4.

It wasn’t the Lancers’ night from behind the arc, as coach Matt Bradshaw said the team strives to make double digit 3-pointers per game. Wednesday night, the team made just four, while MEC converted 10 of them. Despite that, Bradshaw said his team was physical and exhorted a lot of effort against one of New York state’s best teams.

“When we needed some stops, they made some 3’s that were out there,” Bradshaw said “Credit to them – they made some long 3’s. But I was happy with our effort. We just need to continue to get better. I told the kids, ‘It’s where you end up, not where you are now.’ … It’s a game we could’ve won, but I’m pleased with the effort,” he said.

Gayle, coming off a big night, said physically, he felt fine following a couple bumps to the head and was happy to see his team stay close to MEC, despite the loss.

“I like what I saw. We showed that we can battle against the best,” Gayle said. “They had a lot of size, they had a lot of quickness, but most definitely they shot the ball real well. I think we played great defense, they just made shots over our guys and there’s really nothing you can do about that, because that’s what they train to do. So I like our chances moving down the stretch.”

Bradshaw said non-league games and tough league matchups help the Lancers prepare for the Section VI playoffs and compete in Class A1, which Bradshaw called, “the best class in Section VI.”

Additionally, Bradshaw said he felt his team did not get outplayed physically by MEC, and he praised Gayle for the game he played against a tough team.

“Roddy put a show on for the ages tonight. It might’ve been a loss, but I don’t think you’ve seen a performance like that in years. Not just offensively, but defensively. He’s a man among boys out there,” Bradshaw said. “I was excited for this game for Roddy, because I just wanted to see how he would be against that team, because they have some physical guys. And Roddy never ceases to amaze me. He’s just so good.”

Gayle added that he welcomes physical games where there’s a fight for every possession.

Next up, the Lancers take on league rival Niagara Falls.

The last time the two teams squared off was last year in the Niagara Frontier League championship game. The Lancers, following a midseason loss to NF, won the NFL finals behind a big 29-point night from Gayle, 75-71.

Bradshaw and Gayle knew there would be a little more hype to this matchup, but both said it’s just another day on the schedule.

“(Take it) just one practice at a time,” Gayle said. “You gotta focus in practice and practice how we play. If we practice with energy, then we’ll come into the game with energy.”