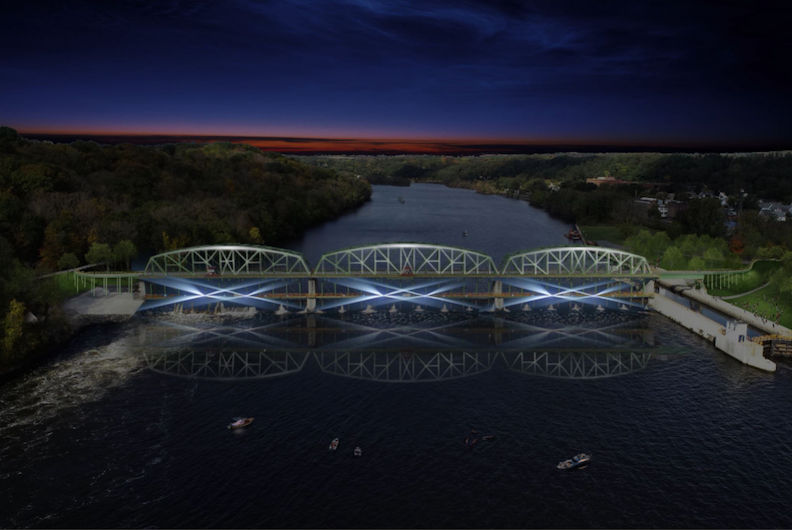 $165 million phase one of plan to begin this year

Recommendations made by Reimagine the Canals task force

Gov. Andrew M. Cuomo on Monday unveiled the 29th proposal of his 2020 State of the State: a $300 million plan to reimagine the Erie Canal by creating recreational activities on the Canal to boost tourism, mitigating flooding, enhancing irrigation and recreational fishing and restoring wetlands. Cuomo is recommending the New York Power Authority board, which now oversees the Canal Corp. as a subsidiary, approve the $300 million investment over the next five years at the board's January meeting.

"When the Erie Canal was created in the 19th century it set the state and the nation on a path to prosperity, and this year we will repurpose the canal to fit our state's 21st century needs," ] Cuomo said. "This bold and visionary plan to transform this historic waterway will build on the success of the Empire State Trail, grow tourism across upstate New York, improve resilience of today's canal communities and ensure the economic sustainability of the waterway into the future."

Lt. Gov. Kathy Hochul said, "As an upstate New Yorker who lives near the Erie Canal and is a frequent visitor to canal communities, I know how this plan to reimagine the canal can unlock even more potential to make it a major tourism magnet. The canals have played a crucial role in New York's history and growth, and with the implementation of these new, exciting projects, the canals will remain a vital force and make a positive contribution to the economic well-being and quality of life in the 225 communities they travel through."

A first phase of funding will start this year that will have two parts: a $100 million economic development fund to invest in communities along the canal, and a separate $65 million investment in solutions that will help prevent ice jams and related flooding in the Schenectady area.

The remaining $135 million of the plan's funding will subsequently be allocated to research recommended by the Reimagine Task Force, as well as to solutions related to flood mitigation, invasive species prevention and ecosystem restoration.

In the first phase of the program, a $100 million economic development fund will support projects that adaptively reuse canal infrastructure to enhance water recreation, tie the canal's new recreational improvements to the governor's Empire State Trail, celebrate historic canal structures, and develop unique canalside attractions and activities. Roughly $25 million of that will be allocated immediately to a set of initial projects:

•Connecting Communities: The "Brockport Loop" project in Monroe County will connect SUNY College at Brockport to the Empire State Trail and the village of Brockport through the transformation of a canal guard-gate into a pedestrian bridge and overlook, with a supporting grant of $2 million from the Ralph Wilson Foundation.

•Celebrating "Iconic Infrastructure": Interactive, hydro-powered illumination of Canal "movable dams" – initially in Amsterdam and Canajoharie in the Mohawk River valley – will celebrate the canal's heritage and its history as an engineering marvel.

•Expanding Water Recreation: A new whitewater destination, at the north end of Cayuga Lake near Seneca Falls, will rely on existing water control infrastructure to construct an active water sports course adjacent to the Montezuma National Wildlife Refuge, to increase eco-tourism and sport visitors to the region.

•Adapting Industrial Property for New Uses: Winner of the “Reimagine the Canals” competition, a canalside pocket neighborhood, will be developed by Madison County in Central New York at a former industrial property in Canastota along the Old Erie Canal – demonstrating a new model for 21st century canalside living.

•Developing Destination Accommodations: The historic Guy Park Manor, on the Mohawk River in Amsterdam, will be reborn as a hospitality destination while a pedestrian bridge constructed across the already-existing canal lock will provide access to additional overnight accommodation along the Empire State Trail on the opposite side of the river.

To help mitigate chronic summer and winter flooding in the Mohawk River Valley, an initial allocation of approximately $65 million will be used for deploying an icebreaker and undertaking dredging and filling in certain portions of the Mohawk to prevent ice jam formation; developing an ice jam monitoring and early warning system to better alert communities to potential flooding; and retrofitting the New York Power Authority's Vischer Ferry power dam in Niskayuna to help mitigate summer flooding and ice jams around the Schenectady and Scotia areas, including the historic Stockade District. At the recommendation of the task force, further studies will be undertaken to better assess additional approaches to both reducing flood vulnerability in the Mohawk and tackling the rise of aquatic invasive species across the canal.

The plan also includes establishment of an irrigation district in Western New York to enhance drought resiliency by ensuring  farmers in those counties have reliable access to water during the critical summer growing season. Guaranteed access to water is needed to expand the production of high-value fruits and vegetables, specifically in areas that today cannot access canal water. To ensure water is available during periods of low rainfall, canal outflow infrastructure will be modernized as part of a "smart water management system" that can better respond to changing weather conditions. A new grant program operated by the New York State Department of Agriculture and Markets will underpin additional private-sector investment in irrigation infrastructure.

To create world-class fishing in Western New York, the new plan recommends managing water releases from the canal to enhance fish habitat, improve angling opportunities, and extend the fall fishing season in Lake Ontario tributaries. It also includes funding to expand public fishing access along key streams in Orleans, Monroe and Niagara counties. In addition, it identifies a program to divert canal water to restore and re-nourish wetlands in Central New York that were compromised a century ago by the canal's construction. This will allow areas in close proximity to the Montezuma National Wildlife Refuge, a migratory stopover for more than 1 million birds each year, to be significantly enhanced to further attract naturalists, locals, and visitors from throughout the region and beyond.

Ideas in this plan originated from the Reimagine the Canals task force recommendations.

The group, launched by Cuomo last May to pursue a comprehensive investigation of how the 195-year-old Erie Canal could be reimagined for the 21st century, issued its full set of findings to the governor in an official report. The task force set out to:

In addition to economic development and operational recommendations, the findings, detailed in the Reimagine the Canals Task Force Report, include solutions for strengthening storm resiliency along the waterway, improving irrigation for farmlands, expanding fishing opportunities in Western New York, and restoring wetlands in Central New York.

The task force engaged with municipal leaders, stakeholders, local business owners, scientists and other experts, along with community members, to identify opportunities and solutions that support a new vision for future investments in the waterway. Many of the ideas the task force explored came from the completed “Reimagine the Canals” competition, held last year by the New York Power Authority and New York State Canal Corp. SUNY's Rockefeller Institute of Government, on behalf of the task force, conducted a series of outreach sessions during the summer in five canal communities – Lockport, Brockport, Schenectady, Utica and Syracuse – to solicit new ideas from the public at large. Ideas were also solicited on a Reimagine the Canals website, offering more distant canal users an opportunity to provide their views.

The "Reimagine" initiative builds on efforts by Cuomo to invest in the canal corridor, including the state's downtown revitalization initiative and successful Taste NY program, which have stoked new industries, businesses and housing in canal communities. Harnessing the canal's full potential to attract more tourism and recreation is a key focus of the initiative. Cuomo and state agency and authority staff will collaborate with Empire Line communities and continue to consult with task force members and other stakeholders to ensure the success of projects as they move forward.

There are 1.6 million trips taken annually on the Erie Canal Trailway, the former towpath used by mules and horses to pull barges in the canals' early days. The Trailway is part of Cuomo's Empire State Trail, which, at 750 miles, will be the largest state multiuse trail network when completed in late 2020. Gov. DeWitt Clinton began work on the original Erie Canal on July 4, 1817.