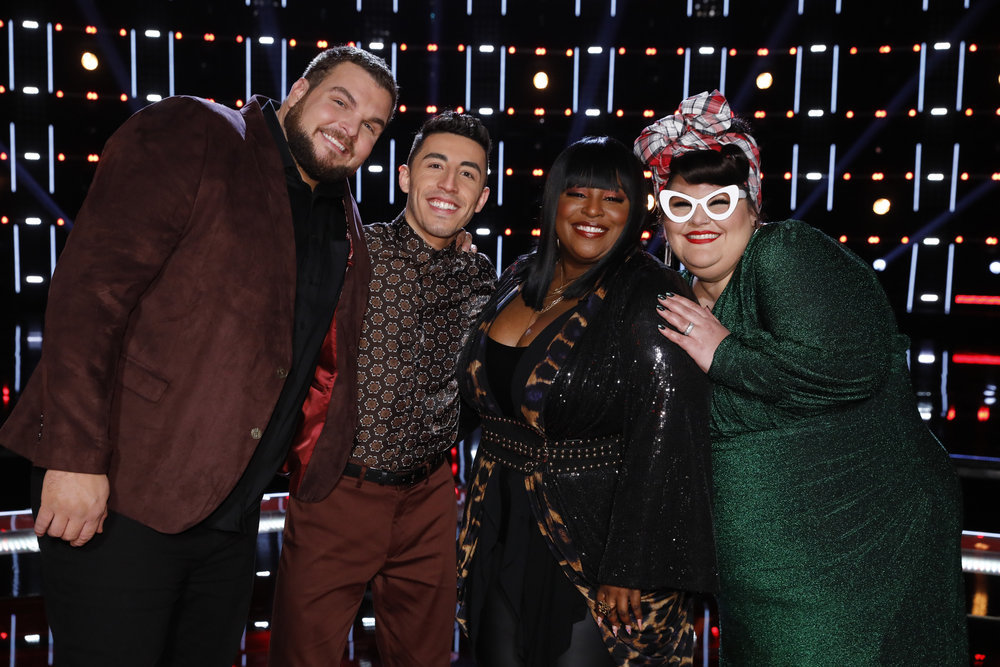 For first time in seven seasons, all four coaches have an artist competing in finale

One of the four finalists – Ricky Duran from Team Blake, Jake Hoot from Team Kelly, Katie Kadan from Team Legend and Rose Short from Team Gwen – will be crowned the winner. This is the first finale in seven seasons in which all four coaches have an artist competing in the finale. The season finale will also feature special musical collaborations with the top 4 finalists.

On part one of the live finale, airing Monday, Dec. 16 (8-10 p.m. ET/PT), the final four artists perform in front of coaches Kelly Clarkson, John Legend, Blake Shelton and Gwen Stefani. Each finalist performs three times – one new solo cover, a special holiday duet with their coach and they also debut their first original single. One of the four artists will be a step closer to being named “The Voice.” Then on part two of the live finale, airing Tuesday (9 p.m.), a new winner will be crowned “The Voice.”

Award-winning vocal powerhouse and former “Voice” coach Hudson returns to “The Voice” stage for a special performance of “Memory,” the iconic song from the upcoming Universal Pictures film “Cats,” which is in theaters everywhere Dec. 20.

Multi-Platinum CMA and ACM Award-winner Luke Combs will perform his hit single “Even Though I’m Leaving” from his latest record-setting album, “What You See Is What You Get.” The single is a multiple week No. 1 on the Billboard country airplay and Mediabase charts, making it his seventh-consecutive No. 1 single and extending his record-breaking streak at country radio. Combs recently won twice at the 2019 CMA Awards for Male Vocalist of the Year and Song of the Year.

Award-winning country radio staple and record-breaking trio Lady Antebellum will perform “What If I Never Get Over You” from their critically acclaimed No. 1 album “Ocean.”

Global pop superstar Dua Lipa will perform “Don’t Start Now,” the lead track from her eagerly awaited forthcoming album, “Future Nostalgia.” “Don’t Start Now,” which is already a worldwide hit with over 170 million streams and an iTunes global No. 1, is an adrenaline-fueled, feel-good dance floor anthem of positivity and self-empowerment.

On the heels of her international breakthrough as winner of season 16 of “The Voice” and recent chart-topping success, Maelyn Jarmon, who now goes by Maelyn, will perform a spirited and seasonal take on the holiday classic “Have Yourself a Merry Little Christmas.”

This season, the Monday and Tuesday editions of “The Voice” are averaging a 1.7 rating in adults 18-49 and 9.9 million viewers overall in “live plus seven day” averages from Nielsen Media Research. In “live plus same day” Nielsens, “The Voice” is undefeated in 18-49 this season in both its Monday and Tuesday timeslots versus regular competition on the “Big 4” networks. “The Voice” also adds significant viewership through extended time-shifting on digital and linear platforms, with the show’s Sept. 23 season premiere now up to a 3.5 rating in adults 18-49 and 13.8 million viewers overall when viewership to date on all platforms is counted.