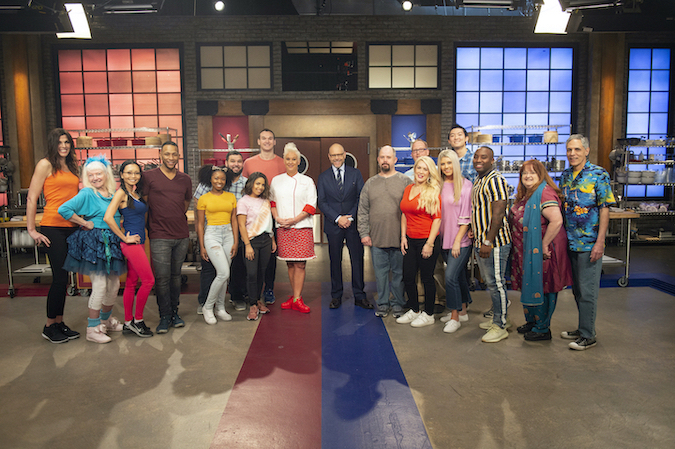 For the first time, Alton Brown is joining Anne Burrell to transform a roster of terrible cooks into culinary shape with challenges bigger and crazier than ever in a brand-new season of “Worst Cooks in America.”

The fan-favorite series pits two teams of atrocious cooks, one led by Alton and the other by Anne, against each other in a rigorous kitchen boot camp designed to transform their food skills. In the end, the one recruit who makes the most impressive culinary improvement wins a $25,000 cash prize and bragging rights for their team leader. The 10-episode season premieres Sunday, Jan. 5 (9 p.m.), on Food Network.

"Our viewers know anything can, and does, happen on ‘Worst Cooks,’ and kicking off the new year with a new season has become a tradition," said Courtney White, Food Network president. "Having Alton join Anne at boot camp delivers more unexpected moments than ever."

In the season premiere, 16 of the country's worst cooks enter boot camp with dreams of putting their kitchen nightmares behind them. Anne and Alton want to see what they're dealing with, so they ask the recruits to make their infamous signature dish.

The results are truly disastrous.

After being sorted into teams, Anne and Alton teach their recruits a chicken soup and sandwich dish, and the competitors with the worst dishes are sent home.

Upcoming episodes feature a Chinese New Year celebration, tailgate-themed challenge and the return of fan-favorite game “Remote Control Chef.” The season culminates Sunday, March 8, with the two most-improved recruits preparing a three-course restaurant-quality meal for judges Kelly Choi, Brian Mazza and Jet Tila in a blind taste-test to determine the winner of $25,000 and bragging rights for their mentor.

Fans can meet the new recruits, relive the top moments from boot camp, and get an exclusive, extended look at Anne and Alton's cooking demos at FoodNetwork.com/WorstCooks. Share your biggest kitchen disaster and follow the competition on social and using #WorstCooks.