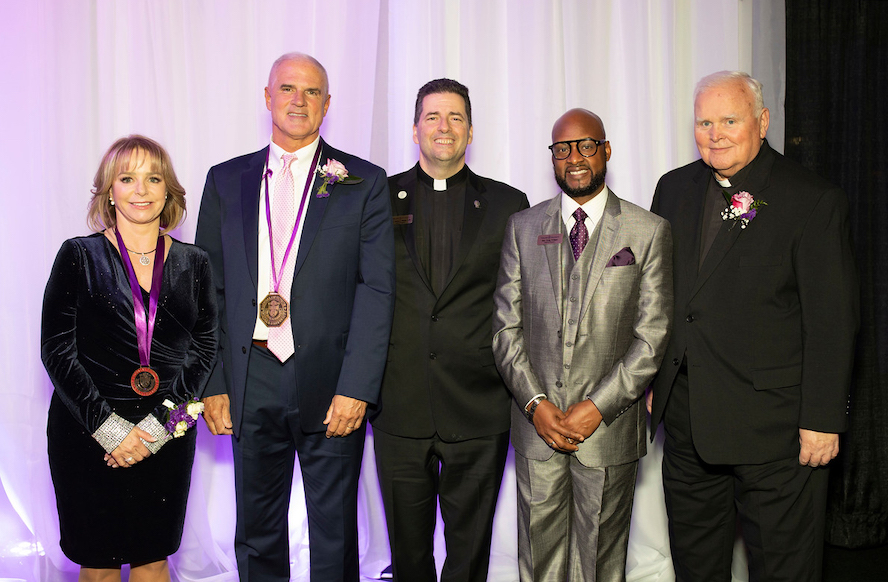 Niagara University recognized the accomplishments of four individuals – while raising critical funds for student scholarships – during its 2019 President's Dinner, which was held Nov. 15 at the Conference & Event Center Niagara Falls.

Nearly 500 Niagara alumni, students and friends attended the event, the proceeds of which directly benefit NU's scholarship programs. A total of $272,000 was raised this year toward student scholarship assistance. This is also the fifth year in a row the $200,000 fundraising mark was surpassed.

The following leaders were honored for their contributions in business and community life:

•Laura Zaepfel, vice president for corporate relations at Uniland Development Co., received the Caritas Medal. Zaepfel works to optimize the Western New York business climate and construct policies and procedures that will produce a diverse workforce and a sustainable economy in the region. In addition, she manages Uniland’s corporate philanthropy program, and works with and volunteers for community and business organizations that advocate for residents through social justice and diversity, health and wellness, education, and environmental programs. Zaepfel has provided leadership to organizations including Catholic Charities, Humanities New York, the National Association of Industrial and Office Properties, the National Federation of Just Communities, and the Buffalo and Erie County Naval & Military Park.

•Rev. Michael J. Carroll, C.M., ’73, ’11 (Hon.), director of the Miraculous Medal Shrine in Philadelphia, and spiritual director of the Central Association of the Miraculous Medal, was honored with the St. Vincent de Paul Award. In his current role, Carroll promotes devotion to Our Lady of the Miraculous Medal. Over the years, he had a number of assignments, including school minister at Archbishop Wood High School and 16 years at St. John’s University in Queens, where he worked in campus ministry and for the university’s Rome campus, as well as executive vice president for student services. He was elected provincial superior for the Eastern Province of the Congregation of the Mission in 2008 and served in that post until 2017.

•Rev. Craig D. Pridgen, senior pastor of the Niagara Falls Experience of True Bethel and senior business vendor analyst for M&T Bank, was given the Legacy of Service Award. Pridgen was instrumental in opening and managing the first Subway restaurant franchise located in a church and in the oversight of a job readiness program that prepared inner-city youth for work. He is a member of the NU board of trustees and currently serves on the boards of directors for Literacy New York, Buffalo-Niagara Inc.; Niagara Falls Memorial Medical Center; and The National Federation for Just Communities.

•Paul E. O’Leary Jr., ’81, retired managing partner at Deloitte & Touché LLP, received NU’s Medal of Honor. Upon his graduation, O’Leary started his career with Touché Ross & Co (now Deloitte & Touché) in the Buffalo office. He was promoted to partner in 1995. In 2002, he was named upstate New York managing partner, responsible for operations from Albany to Buffalo, and in 2014, he was named Denver professional practice director, a role in which he oversaw all functions of the audit practice. He also served as the firm’s national Blue Cross partner from 1996-2010, with responsibility for consistency in reporting for all Blue’s attest clients and maintaining the relationship with BCBSA. Throughout his career, O’Leary has served a broad set of clients in various industries, including the Buffalo Bills, the Buffalo Sabres, Delaware North, and Tops Markets. His community service includes membership on the NU board, the Kaleida Health board of directors, and the Calamar board of advisers, and he is advance marshal of the Honda Classic.

Michael Vitch, ’83, a member of NU's board, and his wife, Janice, served as the dinner's chair couple.