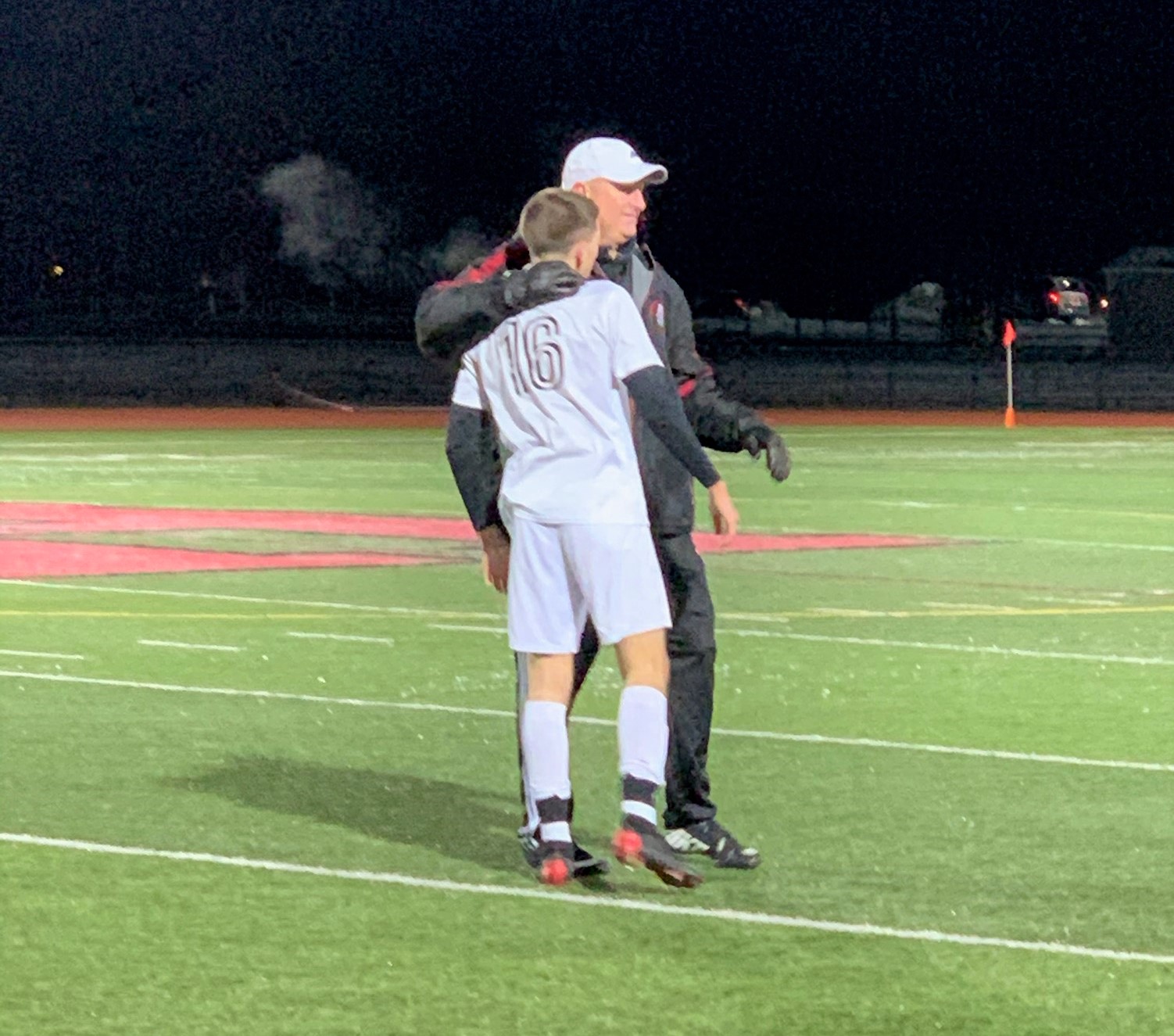 Niagara-Wheatfield Falcons coach John Coulter shares an embrace with senior Jake Vallas following the team's 3-0 loss in the Far West Regional. Vallas was the leading scorer for the Falcons and scored six goals in the postseason. (Photo by David Yarger)

It was a historic season for the Niagara-Wheatfield Falcons boys soccer team, but, with all good things, they come to an end.

Friday night, the Falcons’ 2019 campaign came to a close in the Far West Regional versus the Greece Athena Trojans, 3-0.

It was a cold and bitter night at Hilton High School, and in certain spots of the field leftover snow could be spotted. Despite riding a heat wave of success into the game, the Falcons froze like the weather and couldn’t gather any momentum in the loss.

In the first half, the Trojans presented a different test that Niagara-Wheatfield had never seen.

Greece Athena pressured the Falcons defense, something that was rarely seen in the Section VI playoffs or regular season. In the four playoff wins for N-W (McKinley, Hamburg, Williamsville East and Williamsville South), the team gave up one goal, and it was an own goal.

Falcons goalkeeper Josh Morelli kept the game scoreless with 30 minutes left in the first half, as the sophomore made three saves in one minute.

The Trojans pressure kept coming, though, and junior Ryan Fitzgerald found the back of the net with 14:23 left in the first half.

Wheatfield notched a few offensive opportunities near the end of the half, but with no success.

At halftime, Athena led the Falcons, 1-0.

In the first minute of the second half, Morelli kept up his stellar outing in goal. His save prevented the Falcons from a 2-0 deficit.

Wheatfield had two offensive opportunities early in the first half, including a Jake Vallas shot that went wide left.

Athena put a dagger into Wheatfield hearts with just over 15 minutes to go. Emmitt Rosado received a perfect service pass into the crease and finished it to make it 2-0, Trojans.

The final blow came with 2:22 remaining, as Athena star Dylan Rice scored to make it 3-0.

For Wheatfield coach John Coulter, the loss was a tough one to swallow, but he said he’d always remember the family environment and good times the team had. In addition, he praised those who embarked not just on the hour-and-a-half journey to Hilton, but those who followed and supported the team all season.

From start to finish, Athena was on top of the Falcons offensively and defensively. The Trojans pressured N-W, which the team very seldomly saw during Section VI play.

“They were tough top to bottom,” Coulter said. “A lot of teams back in our section, we could take a couple guys out of the game and defend them really well, then they would drop off. These guys had players from start to finish.”

For Athena, the team moves on to the state semifinals in Middletown, next weekend.