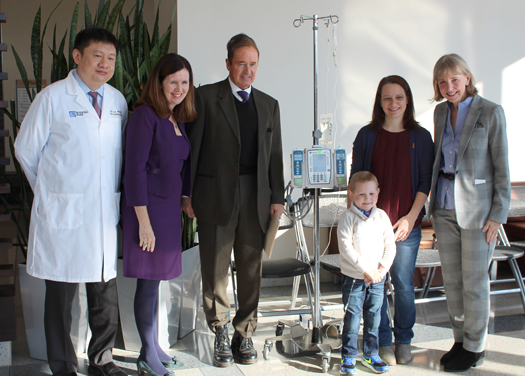 Press release: ‘Children with cancer and their families faced with uncertainty as critical drugs become unavailable’

Congressman Brian Higgins is calling for answers and action in response to nationwide pediatric cancer drug shortages that are resulting in the rationing of doses and in some cases delayed treatment for our youngest cancer warriors.

In a bipartisan letter to U.S. Department of Health and Human Services Secretary Alex Azar led by Higgins and signed by fellow House Cancer Caucus co-chairs Reps. Peter King (NY-02), Derek Kilmer (WA-06) and Brian Fitzpatrick (PA-01), they wrote, “Children with cancer and their families face too many challenges as it is; they should not also have to bear the worry, fear and frustration that comes with knowing a drug that could help their child exists, but it inaccessible due to a shortage.”

Higgins is a member of the House Ways and Means Subcommittee on Health and a member of the Pediatric Cancer Caucus. In July, he stepped in to help two pediatric patients in the Roswell Park Oishei Children’s Cancer and Blood Disorders Program diagnosed with acute lymphoblastic leukemia in need of doses of Erwinaze (also known as asparaginase Erwinia chrysanthemi). The chemotherapy drug is often a last resort, provided as a substitute for children who have suffered severe allergic reactions to the standard protocol chemo drug pegaspargase.

“It’s scary to go through something like this. It adds stress to an already overwhelmingly stressful situation,” said Katie Tingley of Bradford, Pennsylvania, whose 5-year-old son, Alex, had his treatment for acute leukemia interrupted because of the Erwinaze shortage. “When the thing that is supposed to help your child is not available, it’s terrifying.”

In recent months, families of children with cancer have also faced a critical shortage of vincristine, also known as Oncovin, a chemotherapy drug used to treat numerous kinds of pediatric cancer. The vincristine shortage comes after one of only two manufacturers of the drug, Teva Pharmaceuticals, made a business decision in July to discontinue the drug.

Meanwhile, the remaining supplier of vincristine, Pfizer, has been experiencing manufacturing issues, further reducing the available supply of the drug. This has forced providers and patients into an untenable position, as there is no alternative drug for pediatric patients that can be substituted for vincristine.

“There are children behind these shortages,” said pediatric oncologist Kara Kelly, M.D., chair of the Roswell Park Oishei Children’s Cancer and Blood Disorders Program, a Waldemar J. Kaminski Endowed Chair of Pediatrics at Roswell Park Comprehensive Cancer Center. “This is threatening children’s lives, not just in Buffalo, but all over North America. And it’s a preventable problem – this does not need to happen.”

The national drug shortage problems go beyond Erwinaze and vincristine. According to Roswell Park Comprehensive Cancer Center Chief Pharmacy Officer Dr. Lijian Cai, there are over 200 known nationwide medication shortages. Of these, about 150 are available for use by pediatric patients. Twenty-two medications are on critical shortage at Roswell Park with no access to supplies beyond the stock on hand. The medications range from antibiotics to life-saving cardiac treatments, and several oncology products. An additional 10 medications are on intermittent shortage at Roswell Park, including intravenous immune globulin, a plasma product used in those with weakened immune systems, including bone marrow transplant recipients and patients with leukemia or Kawasaki disease, to reduce the chance of infection.

“We’re grateful to Congressman Higgins for driving action on this issue to make sure this doesn’t happen again. We need earlier notice when a shortage is likely to occur, a better sense of which shortages are most dire and better communication channels among agencies and providers. That’s the only way we are going to prevent kids like Alex from being harmed by the dysfunction of our health care system,” Cai said.

The shortage recently prompted the Children’s Oncology Group (COG), a coalition of over 9,000 pediatric cancer professionals at hundreds of facilities, including Roswell Park, that conducts National Cancer Institute clinical trials, to write a letter calling for “advocacy solutions that have the goal of guaranteeing cancer drug supplies for children in the United States.”

The COG letter said, “We are greatly concerned that some children are already being impacted by this shortage and by the understandable anxiety this creates for all families of children with cancer. We have previously published guidelines to help physicians who may be forced to ration drug about approaches to consider, along with steps hospitals can take to minimize the impact of a drug shortage.”

The National Cancer Institute reported, “Between 1975 and 2010, childhood cancer mortality decreased by more than 50%. For acute lymphoblastic leukemia, the five-year survival rate has increased over the same time from 60% to approximately 90% for children younger than 15 years and from 28% to more than 75% for adolescents aged 15 to 19 years. Yet due to the rise of drug shortages, over the past 10 years, 8 of the 10 drugs used in treating the most common childhood cancer, acute lymphoblastic leukemia, were temporarily unavailable.”

In a letter to Azar, Higgins and the cancer caucus co-chairs ask the Department of Health and Human Services to answer a number of questions: “In light of this current life-or-death situation facing too many children with cancer, we would like to know more about what is currently being done to mitigate these kinds of drug shortages.”