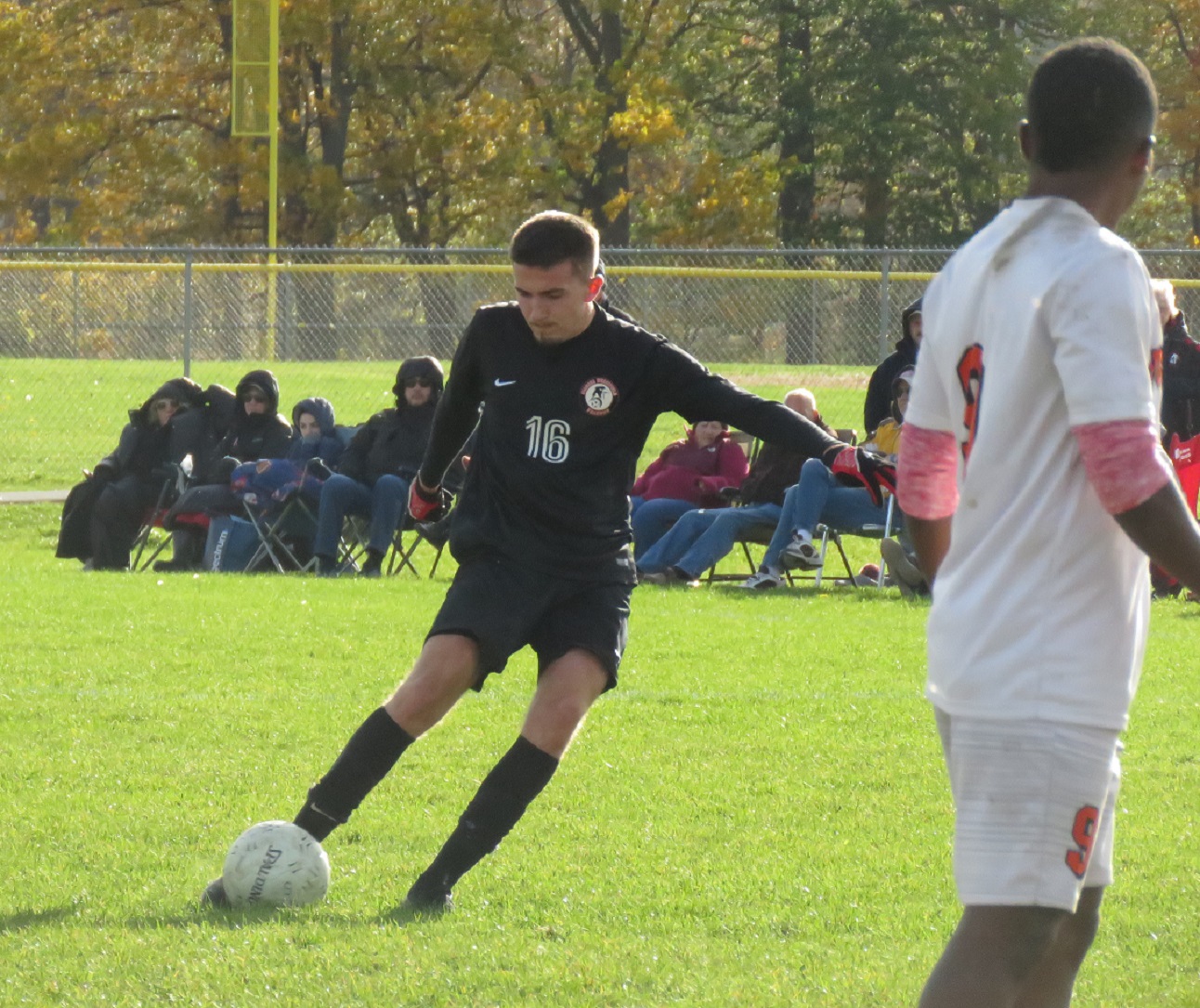 Niagara-Wheatfield's Jake Vallas launces a free kick during Wednesday's Section VI Class A1 quarterfinal win versus McKinley. Vallas netted the Falcons' first goal to tie the game at one. Niagara-Wheatfield went on to win in penalty kicks, 2-1. (Photo by David Yarger)

When it comes to playoff time, the saying is: “Survive and advance.”

Wednesday afternoon (and into the evening), the No. 1 seeded Niagara-Wheatfield boys soccer team did just that, as the Falcons pushed past No. 8 McKinley, 2-1, after two rounds of penalty kicks to advance to the Section VI Class A1 semifinals.

McKinley did not have many shots on goal, in fact, the Macks only goal was an own goal, following a miscue defensively by the Falcons.

One thing McKinley did do well, though, was defend. The Macks made life tough all day for N-W. If the Falcons got the ball in deep, a Mack was always there to boot it away.

The Falcons trailed 1-0 at halftime.

In the second half, Niagara-Wheatfield put up four close shots on net early, but couldn’t capitalize.

Majority of the game was eerily similar to the Falcons most recent matchup, which N-W lost 1-0 versus Lewiston-Porter. In that game, the Falcons controlled the ball for most of the 80 minutes, but could not score.

The Falcons got on the board with under 15 minutes left in the second half, as Ralph Wence sent a free kick into the crease, which Jake Vallas dove and headed the ball into the net. The score tied things up at one.

McKinley nearly answered two minutes later, as kick sailed into the crease and was juggled around by Falcons keeper Josh Morelli. The N-W keeper was able to corral it, though, and following a few extra kicks at the ball, a small scrum broke out without any penalty.

The Falcons had a corner kick opportunity as time ran down, but nothing came from it and the teams went into overtime.

Wheatfield control most of the tempo during the first overtime, but, once again, nothing could hit the back of the net.

High school soccer games are usually 80 minutes. Wednesday, the two teams played 110 … and that wasn’t all.

After two overtimes, the teams would settle the game with a round of penalty kicks.

The first two kickers, Wence and Kyaw Paw of McKinley, both missed high off the cross bar, which drew loud groans from the attendance.

Wheatfield’s next kicker, freshman AJ Zarcone was able to sneak one to the right of the keeper for a goal. The Mack’s followed similarly, as Sameer Alzaheri got a kick by Morelli.

Vallas then chipped a kick into the net for Wheatfield, as the back and forth affair continued. McKinley refused to go down, though, as Milkias Aregawi answered with a pump fake and a kick that fooled Morelli.

Then, after goals by Wheatfield’s Jake Romanow and McKinley’s Jesse Julian, the teams has chances to end it.

John Osetkowski sent a kick wide for N-W, sending McKinley into celebration thinking they had just won, which was not the case.

Sajan Magar came up to the PK dot to try and ice the upset victory for the Macks. Magar sent a kick to Morelli’s right that got past the keeper’s outstretched right arm, but could not avoid the post, keeping things tied after a round of penalty kicks.

The two teams then went into another round of PKs.

Heading into the next round, Falcons coach John Coulter called on Morelli to take the first kick. Yes, a goalkeeper took a kick.

Morelli charged after the ball and nailed it into the back of the net. His job was not over, though, as the sophomore got back between the posts for the next McKinley kick. As Osman Hassan kicked the ball towards the net for the Macks, Morelli dove to his right, stopped the ball and corralled it to secure a quarterfinals victory for Niagara-Wheatfield.

Some watching might have been confused to see a keeper kick during the PK session, but Coulter was quick to defend his decision.

“We work on PKs all the time as sectionals roll around,” Coulter said. “And he doesn’t miss. So, after we went through our first five, he was the first guy I thought of.”

Morelli added he was ready for the moment.

Not only did Morelli nail the eventually game-winning goal, but he put the game on ice with a big save.

“It’s just a testament to who he is,” Coulter said of Morelli’s efforts. “He just brings it every single day in practice. I don’t think I’ve ever had a guy who practices as hard as he does, and that’s saying a lot, because I’ve coached a lot of guys through the years. He brings intensity every day and that showed at the end of the game tonight.”

Regarding the final save and a round of penalty kicks, Morelli added, “I saw his eyes and he looked to his left, which is my right, and I knew I had to make the save to win the game for my team and that’s what I did. … It’s crazy. I made one bad save, one I should’ve had. It was good and hard and kind of hard to explain.”

Despite being the No. 8 seed in the Section VI Class A1 playoffs, the Macks didn’t go down without a fight. Coulter praised McKinley for the effort the team put forth Wednesday.

“We saw them play against Kenmore West the other day and we knew they were a good team; we knew they had a lot of skill. The weather didn’t help as much today – we like to control the ball and it was tough to do with the wind blowing around out here. But, that’s a good team. I give them a lot of credit,” Coulter said.

The Falcons will play the winner of Hamburg versus Hutch-Tech at 7:30 p.m. Friday at Sweet Home High School.