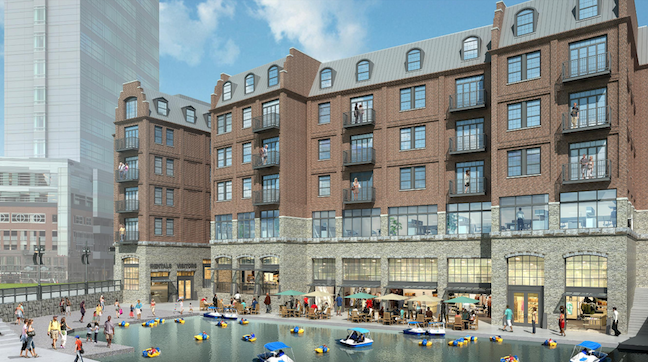 The board approved the design of both Heritage Point on the South Aud Block and the Buffalo Heritage Carousel near the Central Wharf at Canalside, paving the way for the projects to move forward. The board also authorized ECHDC to grant a utility easement on the Outer Harbor to National Grid, and designated additional Canalside Design Committee members.

“The items approved by the ECHDC board today ensure that our waterfront has cohesive and visually engaging spaces for the public’s enjoyment,” ECHDC Chairman Robert Gioia said. “As the waterfront grows – both in its appeal and with physical projects – it is important that we take the time to create a timeless neighborhood and spaces that continue to attract visitors to the area.”

The design approved by the ECHDC board for Heritage Point, a $30 million private development project on the South Aud Block, includes two mixed-use buildings. The structures (totaling approximately 103,000 square-feet) will be separated by a public walkway that follows a portion of the former Prime Slip, which would be inclined to provide an accessible path to the towpath for the public.

The proposed buildings will be constructed to the parcel lot lines, creating uniquely shaped buildings and the exterior building materials will be predominantly stone and brick masonry. The buildings will include a mix of residential, office and a restaurant.

The board also approved the design for the approximately 6,000-square-foot roundhouse building that will house the Buffalo Heritage Carousel. The structure shape is designed as an octagon with a two-step roof that includes a clerestory and is topped with a glazed cupola. The eight sides of the octagon will be formed by heavy timber columns and spanned by a glazed storefront system. The metal panel roof will also have an integrated solar panel to assist in the operation of the carousel. The carousel will be centered within the structure.

The board also designated additional Canalside design committee members. The Canalside design guidelines were prepared in July 2009, revised in March 2010, and apply to all development parcels within Canalside. Its goals are to provide high-quality, attractive and active spaces that employ contemporary techniques that connect to the unique history of the site and Buffalo as a whole. The purpose of the committee, which currently consists of Rishawn Sonubi, Audrey Ross Sanders and Mark Mistretta, is to assist ECHDC with the development, adoption and implementation of the guidelines.

New members designated by the board include Elaine Chow, an adjunct professor within the School of Architecture & Planning at the State University of New York at Buffalo, who also has a private practice; and Deborah Pease, who has a private practice that provides both design and construction management services. The board also designated two alternates to the Canalside design review committee: Michael Lennon and Seth Amman.

Lastly, the ECHDC board approved a measure that will allow ECHDC to grant a utility easement on the Outer Harbor to National Grid. In order to provide electrical service to recent projects on the Outer Harbor, including a bike park and event lawn, the utility easement will permit extension of electrical service from Fuhrmann Boulevard to locations at Lakeside Complex. The proposed easement, which is 20 feet wide, would prohibit building construction on the section and grants National Grid the right to access the property to inspect, maintain and repair the electric cabling as necessary.

The transfer will not provide any monetary compensation to ECHDC.

The ECHDC is governed by a nine-member board consisting of seven voting directors and two non-voting, ex-officio directors. The seven voting directors are recommended by the New York state governor and are appointed by the New York State Urban Development Corporation d/b/a Empire State Development as sole shareholder of ECHDC. The two nonvoting, ex-officio director positions are held by the Erie County executive and the City of Buffalo mayor.

As a subsidiary of ESD, the state’s chief economic development agency, the Erie Canal Harbor Development Corp. supports and promotes the creation of infrastructure and public activities at Canalside, the Ohio Street corridor and the Outer Harbor to attract critical mass, private investment and enhance the enjoyment of the waterfront for residents and tourists in Western New York. Its vision is to revitalize Western New York’s waterfront and restore economic growth to Buffalo based on the region’s legacy of pride, urban significance and natural beauty. For more information on ECHDC, click here.