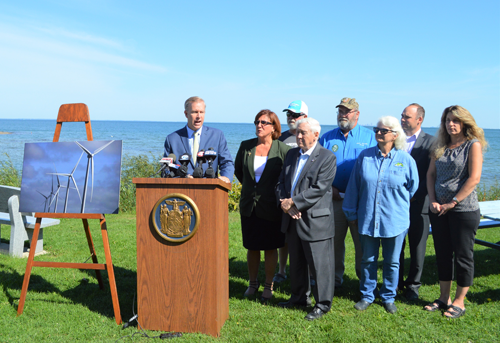 New York State Sen. Chris Jacobs is pictured with Evans Supervisor Mary Hosler, Erie County Legislator John Mills, and representatives of Citizens Against Wind Turbines in Lake Erie as he announces his push for a moratorium on wind turbines in the Great Lakes.

Republican New York State Sen. Chris Jacobs announced that he has introduced legislation (S 6718) that would establish an indefinite moratorium on the construction or placement of wind turbines on any freshwater body located within the boundaries of New York.

A similar moratorium was imposed by the provincial government in Ontario, Canada, in 2011, for many of the same concerns about the impact of wind turbines on the Canadian border of Lake Ontario.

Jacobs’ camp said, “The moratorium is still in effect today, because of the inability to adequately address or mitigate similar environmental concerns, particularly with respect to drinking water quality.”

“The fact that the Great Lakes contain 84% of North America’s surface fresh water reinforces the value of New York state bordering lakes Erie and Ontario,” Jacobs said. “When you take into account that 11 million people rely on Lake Erie for their drinking water, it becomes even more obvious that we must take decisive action now to protect these valuable resources that are so critical to our daily lives.”

The proposal identified by Diamond Offshore Winds calls for what could be as many as 50 turbines 460 feet in height being placed into Lake Erie bordering Hamburg, Evans, Brant and Angola. To give some perspective, these turbines would be roughly 38 stories high, or 100 feet taller than Buffalo’s City Hall.

Jacobs said he believes local residents opposed to the project are right to be concerned about the impact such massive structures placed every half-mile in the lakebed would have on border security and fresh water quality.

Erie County Legislator John Mills said, “I remain strongly opposed to the construction of industrial wind turbines in Lake Erie and believe we must take action to protect one of our largest natural resources. Our fresh drinking water, fish, and other wildlife are at risk if this project moves forward. I thank Sen. Jacobs for proposing this legislation and I stand in support of all residents and elected officials who have voiced their concerns.”

Jacobs met with the U.S. Border Patrol, which explained it has invested millions of dollars in high-tech radar systems along the entire coastline to identify illegal activity crossing the border.

“Officials from Homeland Security confirmed to me that the major shadows cast by these incredibly large structures would make their radar systems useless in that Southtown’s coastline,” Jacobs said. “The frequency of drug smuggling and human trafficking in this corridor, and the waste of millions of taxpayer’s dollars invested to prevent this illegal activity, is more than enough justification for a moratorium right now.”

Primary among the environmental concerns raised is the negative impact from the disturbance of any dangerous or hazardous materials linked to the region’s industrial past that have settled into the lakebed over many decades. Fears have also been raised that pools of toxic algae could be forcibly spread throughout larger portions of the lake by the changing wind patterns created by the turbines.

“There are too many unknowns regarding freshwater offshore wind turbines that cannot be answered, and to allow the state to jeopardize a resource that so many rely on without demanding they have the answers is irresponsible,” Evans Town Supervisor Mary Hosler said. “I thank Sen. Jacobs for his leadership on this issue, and I wholeheartedly support a moratorium at this point in time.”

While Diamond Offshore Winds continues to reach out to state agencies and local municipalities to advance its Lake Erie project, Jacobs said he believes the moratorium he is proposing will serve a greater purpose statewide by also protecting Lake Ontario and countless freshwater rivers from the Niagara River to The Hudson River and everywhere in between.

“The more that I have explored the impact of industrial-sized turbines in our Great Lakes and the processes in place for siting them, the more concerned I am that a massive wind farm like the one being discussed along the Lake Erie border in southern Erie County could become a reality,” Jacobs said. “The environmental and public safety concerns identified with such a massive project, complicated even further by the prospect of minimal or no local input in the decision-making process, have convinced me that a moratorium is necessary right now.”