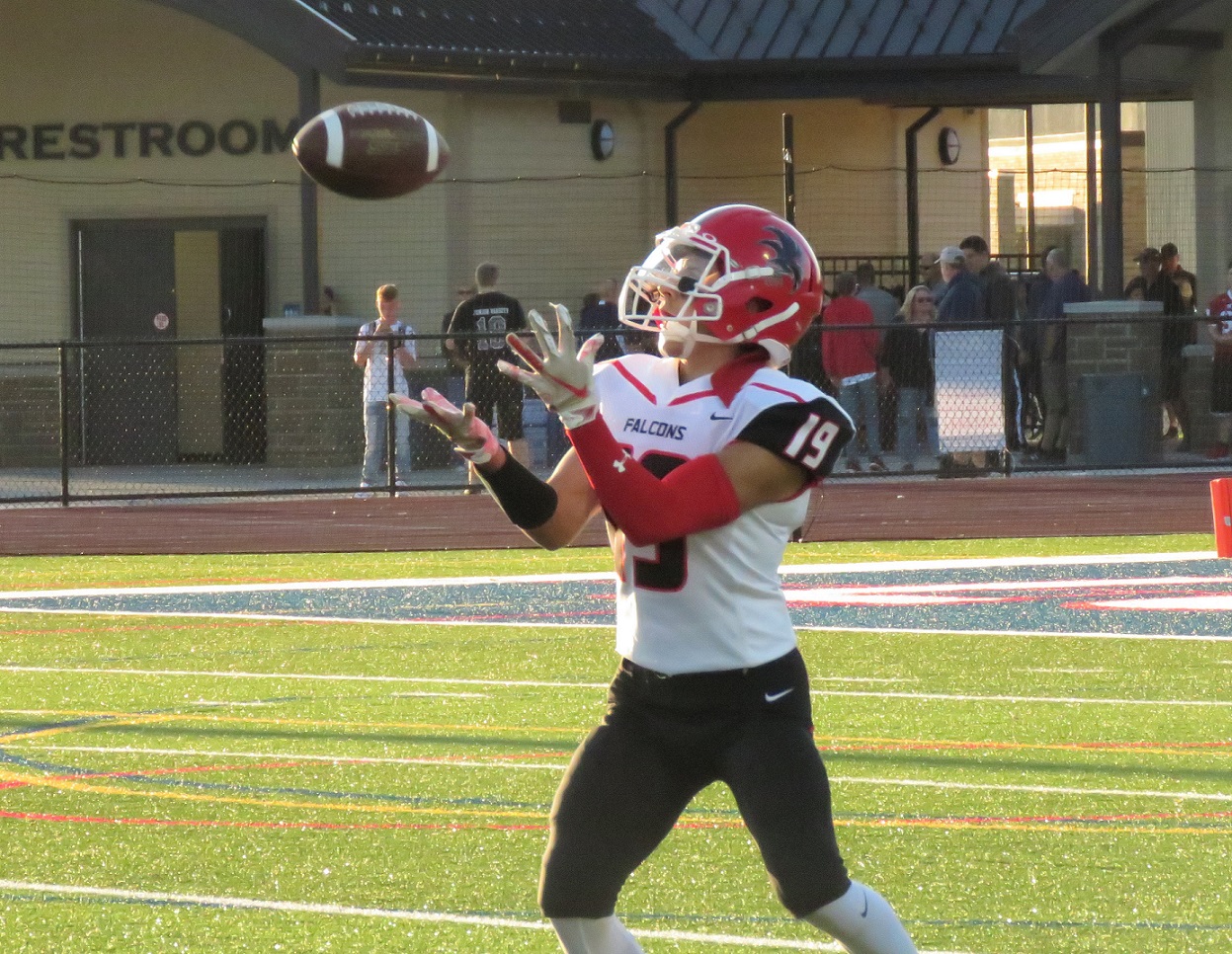 Niagara-Wheatfield's Matt Lysiak catches the opening kickoff and returns it 75 yards for a Falcons touchdown. The game was Lysiak's first-ever organized football game. The senior had two total touchdowns to go along with 71 receiving yards, 23 rushing yards and three tackles and an interception on defense. (Photo by David Yarger)

For some people, when they try something for the first time, they actually do pretty well. For example, Forrest Gump playing ping pong. Another example was present Thursday night, as senior Matt Lysiak led the Niagara-Wheatfield Falcons football team to a 26-6 victory over the North Tonawanda Lumberjacks.

For Lysiak, it was his first organized football game – get ready for this – ever.

The senior made an impact on his very first touch, as he took the opening kickoff 75 yards for a Falcons touchdown, which sent the Falcons sideline into a frenzy. The extra point was blocked, but N-W held a 6-0 lead right from the get-go.

On North Tonawanda’s first possession, it looked as if Lysiak made another big play on the defensive end, as he scooped up a fumble, but possession remained with the Lumberjacks.

Big plays included a Gordon pass to Andy Klebaur for 18 yards, an Austin Leber run for 16, three Joey Kiszka Jr. runs for 22 yards and then another Gordon to Klebaur connection on a goal line fade from three yards out for a touchdown.

After a failed two-point conversion, the Falcons led 12-6.

After a three and out by NT and a punt that gave the Falcons great field position at the 28-yard-line, the offense stepped back on to the field.

On a third down and nine play, Gordon lofted a high 29-yard pass to Lysiak in the end zone, which the “rookie” corralled for a touchdown. After a successful two-point conversion run by Kiszka Wheatfield led 20-6.

Late in the first half, NT tried to gain some momentum after an interception. Rieselman threw a deep pass to Holmes for a 31-yard gain, then after a roughing the passer penalty two plays later, the Jacks were in the red zone.

Rieselman threw a nine-yard pass to Holmes, which kept the clock running, and with five second left, the freshman spiked the ball to stop the clock.

On the fourth and one play, Rieselman’s pass was knocked down, and NT went into the half trailing, 20-6.

For the most part, the second half was a stalemate.

Kiszka and Lysiak made their presence felt on a few plays. The junior Kiszka reeled off some big runs to continue Falcons’ drives, while Lysiak caught another deep bomb from Gordon for 42 yards and had a run for 15 yards.

Kiszka made the score 26-6 with his first varsity touchdown, which would be the final touches on the scoreboard.

The game finished almost how it started.

Playing safety for the Falcons defense, Lysiak intercepted a pass and took it into Jacks territory. Lysiak was just a couple of broken tackles away from a third touchdown on the return. Nevertheless, the play sealed an N-W victory, as Gordon and the offense went into victory formation and took a knee for two plays.

Following the victory, Falcons coach Russ Nixon was at a loss of words regarding Lysiak’s performance in his first-ever game.

“I’m impressed,” he said. “We watch him in practice and we know what we see, but stepping under the lights after a short turnaround from your scrimmage and literally being the first time he’s played organized football, I’m impressed. Again, it’s a collective effort. There were opportunities for guys to step up tonight.”

The coach added that Lysiak was persuaded to play by fellow teammates Bobby Zito and Griffin Cornwell.

It’s not the first time athletes at N-W have tried a sport and been successful out of nowhere, and Nixon said that’s a credit to the school’s athletic program.

He said, “Niagara-Wheatfield, last year, won the NFL Supremacy Cup,” which is given to the Niagara Frontier League School with the most success in a whole athletic year. “That shows you that as a school, as an athletic program, we have athletes. … There’s athletes to be found and I give a lot of credit to our players that got him out.”

Nixon praised the play of Kiszka, who had a big night on the ground, as well as Gordon who commanded the offense under center.

“Joey Kiszka gets us a huge touchdown there in the second half. I mean that’s critical for us. … Chris Gordon did a great job managing the game for us, making smart plays.” he said.

Of his first football game, Lysiak couldn’t hold back how exhilarating his emotions were.

“It was definitely exciting, like something I’ve never felt before. It was a huge adrenaline rush, honestly,” Lysiak said.

He added of his kick return TD, “I saw beautiful blocks in front of me, green grass and hit the holes.”

For Kiszka, it was a big night on the ground, and the running back was thrilled to get his first varsity score.

“It felt pretty good. (It) got me pumped up, got the team pumped up, got everyone going (to) just fight hard and push through everything and never giving up,” Kiszka said.

The junior praised his offensive line for his big night and said, “it all starts with the line … so us backs can get through and penetrate.”

With two touchdown passes and an interception, Gordon said it was nice to start the season on the right foot.

“It feels good, honestly,” he said. “We just came out here, put everything aside and got the job done.”

Even in their first game together as a QB and wide receiver duo, Gordon said he trusted Lysiak on his deep passes to beat the opposing cornerbacks.

Additionally, all three agreed the win was a huge confidence booster for the team’s next matchup versus Williamsville North next Saturday.

On the defensive side of the ball, Zito led with seven tackles, while Cornwell, Jaden Baker and Joe Ambrosia made four tackles. Lysiak added three tackles and an interception for 47 yards.

The Falcons’ next matchup is their home opener at 2 p.m. Saturday, Sept. 14, versus Williamsville North.