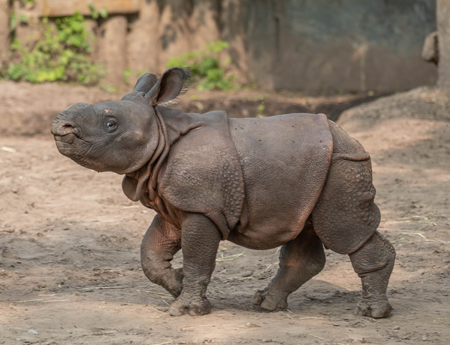 Mohan and mom, Tashi, will make public debut on Friday

On June 17, Tashi, the 24-year-old female greater one-horned rhino at the Buffalo Zoo, gave birth to a healthy male calf. Members of the Buffalo Zoo community have selected Mohan as the name for the calf via an online poll.

Tashi and Mohan will make their first public debut on Friday at the Buffalo Zoo.

After a long, 16-month pregnancy, Tashi began showing signs of labor on June 17. Later that evening, she gave birth.

Mohan, whose birth weight was 123.5 pounds, was conceived by artificial insemination using sperm from a male rhino at Zoo Miami named Suru. The procedure is truly historic and significant, as the Buffalo Zoo is the only organization with two successful births using artificial insemination in a greater one-horned rhino. The first successful procedure took place in 2014, with Tashi giving birth to her third calf, Monica.

Both procedures were conducted in partnership with Dr. Monica Stoops and the Center of Conservation and Research of Endangered Wildlife (CREW) at the Cincinnati Zoo.

The Buffalo Zoo said, “The successful birth demonstrates that artificial insemination is a repeatable and valuable tool to help manage the greater one-horned rhino population in North America. With only around 100 greater one-horned rhinos in zoos in North America and approximately 3,500 remaining in the wild, being able to successfully introduce genetics that are non-or under-represented in the population is critical to maintaining the genetic diversity necessary to keep a population healthy and self-sustaining.”

Poll participants were given the option of four names: Mohan, Howie, Raj and Ollie. Mohan was the top pick with 44.7% of the 21,426 votes. The name means “fascinating, charming and enchanting.”

“We know our guests will marvel at how cute baby Mohan is, but we also want everyone to know that he is important to helping save and advance conservation of the greater one-horned rhino,” Buffalo Zoo President and CEO Norah Fletchall said. 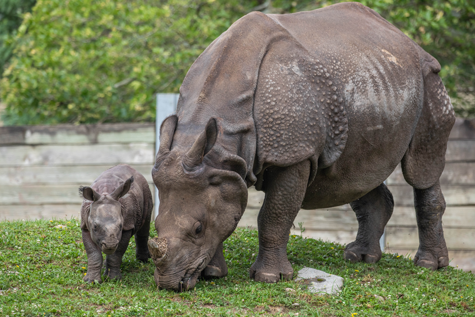