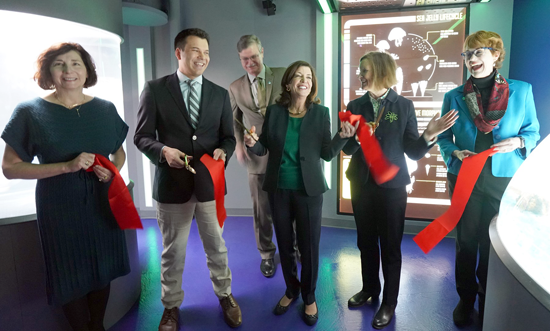 Scenes from the "Aliens of the Sea" ribbon-cutting ceremony at the Aquarium of Niagara. (Photos by K&D Action Photo & Aerial Imaging)

'Aliens of the Sea' opens at Aquarium of Niagara

Gov. Andrew Cuomo announced the completion of the “Aliens of the Sea” exhibit at the Aquarium of Niagara. The darkened exhibit space with dramatic lighting located in the brand-new gallery on the second floor houses about 100 jellyfish representing four species. It is the first time in the 53-year history of the Aquarium of Niagara that it will permanently house such animals among its collection.

The $477,147 “Aliens of the Sea” exhibit will build on the visitor excitement created by the new $3.5 million “Penguin Coast” exhibit, which opened to rave reviews last year. The new exhibits are expected to attract an additional 30,000 visitors each year.

In a press release, Cuomo said, “State investments like the one at the Aquarium of Niagara are contributing to the overall transformation of the local economy, driving tourism and supporting good jobs. This exciting new exhibit will undoubtedly draw even more crowds to the already successful aquarium and give families near and far another reason to explore all that the region has to offer.”

Lt. Gov. Kathy Hochul, who attended Saturday’s exhibit opening, said, “The Aquarium of Niagara is a growing tourism destination thanks to continued state investment. Growing up in Western New York, I was a frequent visitor to the aquarium and later brought my children to experience the beauty and wonder of the sea. The new ‘Aliens of the Sea’ jellyfish exhibit will attract even more visitors to Niagara Falls and continue to strengthen the tourism economy, which is a major driver of jobs across the region.”

Support of this project is enhancing the vitality of the Niagara Region by helping to make the Aquarium of Niagara a notable destination for visitors, school children and local families.

Funding for the “Aliens of the Sea” exhibit includes a WNY Regional Economic Development Council capital grant of $68,000 for construction costs. Additional funding for this new exhibit is being provided through a grant of $150,000 from the First Niagara Foundation in partnership with KeyBank.

Elizabeth Gurney, who leads the KeyBank Foundation and the First Niagara Foundation, said, “KeyBank and the First Niagara Foundation are thrilled to bring this unique, innovative exhibit to the Aquarium of Niagara, ushering in an exciting new era for this storied regional institution. This interactive experience will help promote learning and curiosity, and provide another attraction that will bring visitors and locals of all ages to Niagara Falls and Western New York.”

The jellyfish are new to the aquarium's collection and are part of a revised master plan launched in 2017. Visitors will learn the facts about these animals, including the importance of jellyfish to the ocean planet, as they are guided through the interpretive experience. “Aliens of the Sea” includes five new exhibits on the second-floor level, featuring moon, Australian spotted, and upside-down jellyfish, as well as Pacific sea nettles.

The total volume of salt water in the gallery exceeds 2,000 gallons. Designed lighting in the darkened exhibit space allows for optimal viewing of the transparent jellies, whose bodies capture and fracture the colored light as they propel gracefully through the water.

Specialized exhibit design techniques are required to maintain this species. A constant delicate water flow is needed to keep the jellyfish in suspension. Each exhibit has rounded corners that prevent jellyfish from getting stuck, while water circulates around the perimeter to prevent settling at the bottom.

Aquarium of Niagara Executive Director Gary Siddall said, "This project was a planned decision as part of the aquarium's vision to produce modernized exhibits, dynamic presentations and a quality and attractive experience. ‘Aliens of the Sea’ is another move in the right direction as the aquarium becomes a leader in tourism and conservation for Western New York.”

These ancient creatures, on Earth years before humans, come in all shapes and sizes. With more than 200 species found worldwide, jellyfish, or sea jellies, are one of the world's most common sea creatures. They range in size from just under an inch to giants with tentacles measuring over 100 feet. They are are a vital part of the ocean ecosystem and an important food source for sea turtles and other marine life.

Their recognizable umbrella-shaped bell and trailing tentacles are vital for survival. The bell of the jellyfish is used for movement, while the tentacles are used for capturing and stinging prey and defense. Jellyfish are classified as a free-swimming invertebrate, but they have no blood, heart or brain. The jellyfish does have a simple nervous system and organs that are able to sense and interpret smell, light and other animals that are around them. Their body walls are thin enough to allow oxygen to pass directly from the water to their internal organs.

Empire State Development President, CEO and Commissioner Howard Zemsky said, "The mesmerizing jellyfish at the heart of this new Aquarium of Niagara permanent exhibit will be a popular draw for visitors, who have already enthusiastically welcomed the penguin exhibit and will continue to build Western New York's tourism economy.”

Jeff Belt, WNYREDC co-chair and SolEpoxy Inc. president, said, “Kids who can't get enough of Orbeez and slime are going to be thrilled by the Jellyfish exhibit. The REDC prioritized this project because it will be a guaranteed hit and a signature attraction at the Aquarium of Niagara Falls. Even the most serious scientist will jostle for a selfie among these magnificent creatures of the ocean world."

Dr. Virginia Horvath, WNYREDC co-chair and president of the State University of New York at Fredonia, said, "The beautiful and colorful new jellyfish exhibit combined with the already popular penguin exhibit will draw more visitors to Niagara Falls and entice them to stay longer. The REDC is proud to play a role in improving the overall quality of the tourist experience in the region.”

Destination Niagara USA Vice President of Sales and Marketing Julie Gilbert said, “The expansion projects at the Aquarium of Niagara over the past two years have been nothing short of extraordinary. It has become a must-see attraction for visitors and gives us the marketing ability to draw visitors to Niagara Falls USA throughout the year. Congratulations to the Aquarium of Niagara on yet another incredible development.”

Congressman Brian Higgins said, “The Aquarium of Niagara is a unique Niagara Falls destination for local families and tourists alike. This exhibit and other recent investments offer visitors an enhanced opportunity to explore sea life.”

Assemblyman Angelo Morinello said, “The Niagara Falls aquarium continues to progress with a focus on education and entertainment, which benefits tourism in the Western region. I want to thank Gov. Cuomo for assisting with another important project in Niagara Falls.”

City of Niagara Falls Mayor Paul Dyster said, “Thanks to continued investment from Gov. Cuomo and our state partners, residents of the City of Niagara Falls and the millions who visit every year will have yet another reason to stay and play in our great community. The ‘Aliens of the Sea’ exhibit, along with the many other interactive attractions available to visitors, continue to position the Aquarium of Niagara as a top tourism destination here in Western New York."

For more information about the Aquarium of Niagara, visit www.aquariumofniagara.org. 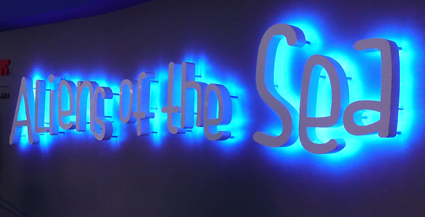 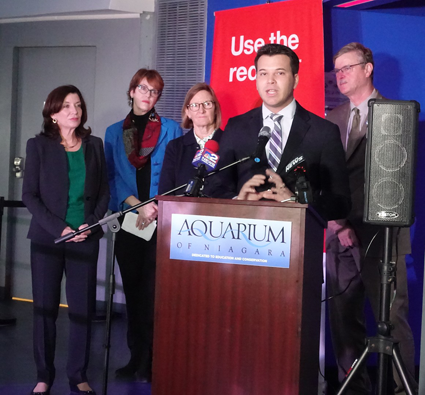 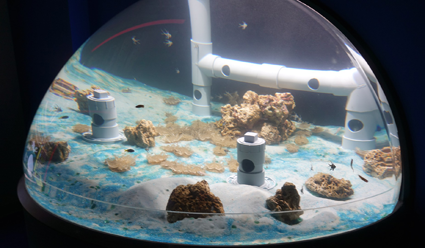 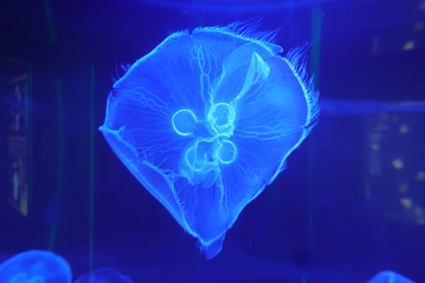 The Aquarium of Niagara is a 501(c)(3) nonprofit organization dedicated to education and conservation. It is committed to rescued marine mammals and all aquatic life. The venue, located at 701 Whirlpool St., Niagara Falls, is open daily at 9 a.m. year-round, except for Christmas and Thanksgiving. For more information, visit aquariumofniagara.org.