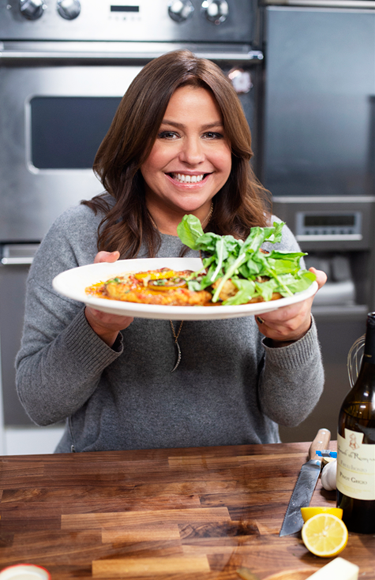 Food Network star, Emmy-winning talk show host, and best-selling cookbook author Rachael Ray returns with a new season of “30 Minute Meals,” with 30 new episodes airing in 30 days throughout the month of April, all accompanied by a dynamic, multiplatform content offering.

In “30 Minute Meals,” Ray gives viewers real-time, step-by-step cooking instructions from ingredient prep through getting a meal on the table, with time-saving tips that make the aspirational achievable.

Kicking off the season on Monday, April 1 (noon ET/PT), viewers will be able to access the premiere episode on multiple platforms, including linear, TVE and Facebook, with subsequent premieres airing every day in April at noon. In addition, the first five episodes will be available starting March 29 on-demand across all platforms and the Food Network app. Fans can also check out Food Network's Facebook page on April 1, 8, 15 and 22 to watch select episodes commercial-free in real time.

The series return also features a rich array of companion content, including the exclusive digital companion series “Rachael's Best of Brooklyn,” recipes and tips, as well as Ray taking over the Food Network skill on Amazon Alexa devices for the month of April.

"Rachael Ray is synonymous with culinary success, whose self-made accomplishments across all genres has earned her a loyal and passionate fan base throughout the country," said Courtney White, president, Food Network. "With Rachael's infectious spirit and delicious recipes for the home cook, we cannot be more excited to share new episodes of ‘30 Minute Meals’ for a new generation, with a new premiere every day throughout April on both linear and digital."

On the season premiere of “30 Minute Meals,” Ray shares with viewers a delicious recipe for her chicken patty parm meatballs. In another episode, she whips up the perfect "breakfast for dinner" recipe, with a hearty and savory dish that will make one want breakfast for every meal of the day. And for those who like their comfort food served quick, Ray shows off a quick and easy, stove-top pot pie that one can make in half the time.

Additional 30-minute recipes during the season feature a cast iron skillet pizza, a Korean-inspired take on the old favorite sloppy joe, and, in honor of Ray’s husband's favorite sandwich, she is treating viewers to her beef au jus, Italian-style sandwich, with provolone sauce, roasted peppers and pickled peppers that is affectionately named “ 'Da Cuz!”

Starting Friday, March 29, fans of “30 Minute Meals” can also enjoy the new digital companion series “Rachael's Best of Brooklyn” on FoodNetwork.com/30MinuteMeals, with Ray introducing audiences to her favorite spots in Brooklyn to see all the great food up close and meet the chefs behind the creations.

Other components of the robust, 360-content offering include a Ray recipe highlighted in FoodNetwork.com's daily recipe newsletter, Facebook Lives with Ray on day of premiere and throughout the season, and Ray taking over the Food Network skill on Amazon Alexa devices starting April 1 – which allows users to interface with Alexa-compatible devices by asking "Alexa, talk to Food Network," to be greeted by Ray’s welcoming voice where they can receive recipes from the season, along with reminders to tune in all month long for new episodes. Viewers can visit FoodNetwork.com for more of Ray’s must-try recipes and join the conversation anytime using #30MinuteMeals.