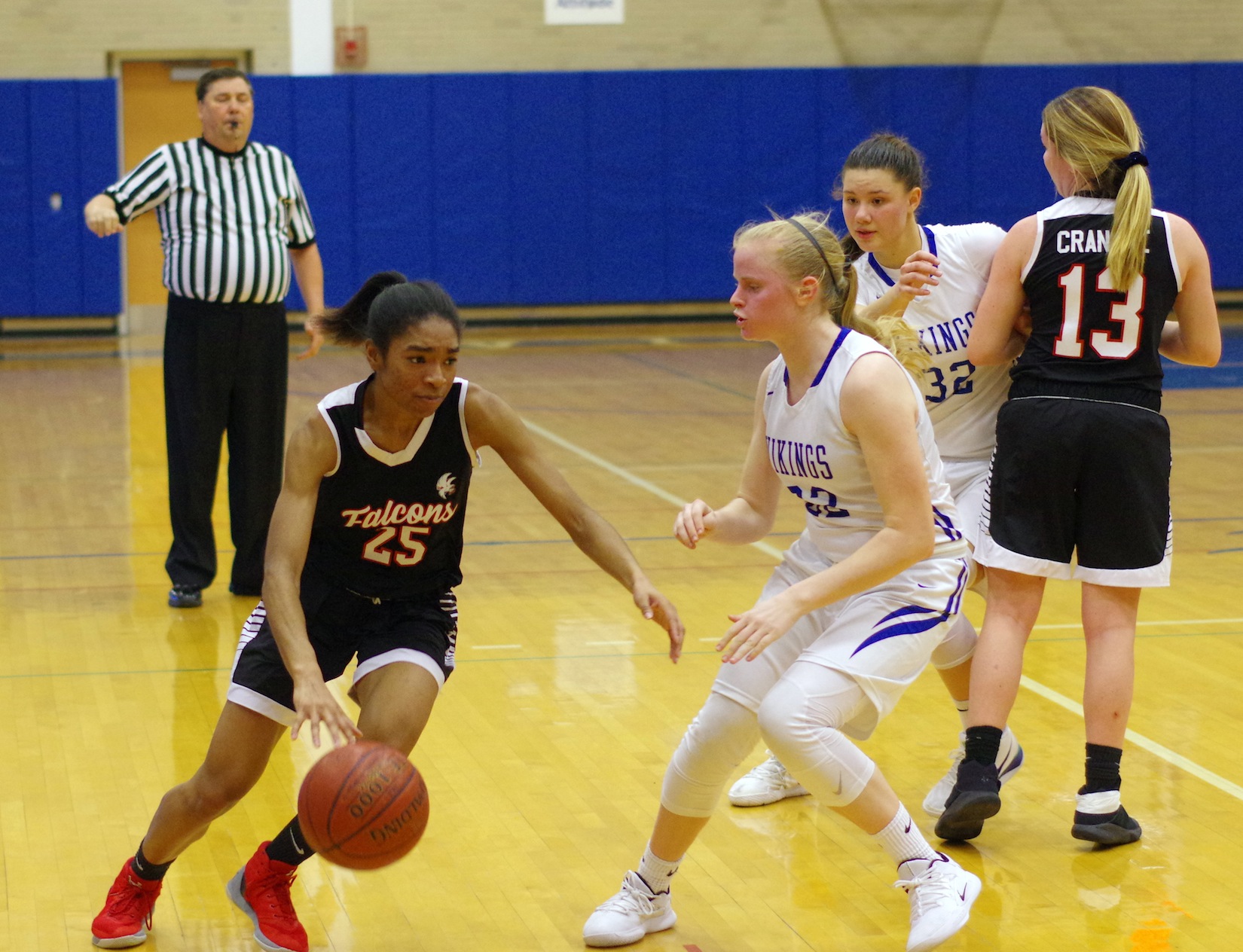 Niagara-Wheatfield's LeGary Jackson (25) drives to the basket against Grand Island's Lydia Sweeney after receiving a screen from teammate Sydney Crangle (13). The Falcons lost at Grand Island 55-23 Tuesday night. Jackson led the Falcons with 10 points and Sweeney led the Vikings with 26 points. (Photo by Larry Austin)

Winter athletics are back in full swing at Niagara-Wheatfield High School after a short holiday break. Teams saw mixed results this past week, but the wrestling team, which has been the team of the winter, so far, continued its strong season.

The boys bowling team picked up a pair of wins this past week. The Falcons defeated North Tonawanda, 7-0, behind a high series (669) and high game (245) from Derek Carr. The team followed the victory with a 6-1 win over Grand Island. Evan Hardy led the team with a high series of 608 and high game of 226.

The bowling teams’ next matches are today versus Lockport.

After a loss at Lewiston-Porter, the boys basketball team rebounded with a victory over Grand Island. For a full report, see the front page.

The girls basketball team’s struggles continued this past week, as it dropped a pair of games.

In a 55-23 loss to Grand Island, Jackson finished with 10 points, five rebounds and six steals.

The girls next contest is at 7 p.m. versus Kenmore East.

The boys hockey team dropped two games versus stellar competition this past week. In a 6-1 loss versus McQuaid in Rochester, Caleb Lee scored the lone goal, while Peyton Siegmann made 42 saves.

In a 4-0 loss versus St. Joe’s, Siegmann faced shots constantly and made 39 saves.

The team will look to avenge the back-to-back losses, as well as an early season loss to Orchard Park, as the Falcons face the Quakers, at 6 p.m. Saturday at Niagara University.

The boys swimming and diving team split a pair of matches this past week – a 94-86 loss versus Grand Island and a 100-78 victory over North Tonawanda.

The boys’ next meet is at 5 p.m. Friday versus Lockport.