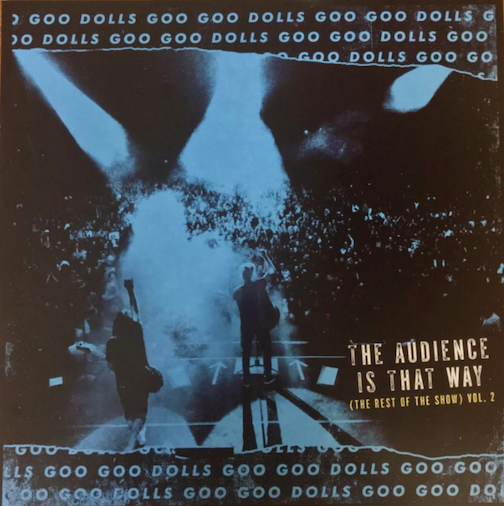 Goo Goo Dolls release new live album 'The Audience is That Way (The Rest of The Show) Vol. 2'

Mon, Nov 26th 2018 11:35 am
Tickets for summer 2019 co-headlining tour with Train on sale now
Multi-Platinum, four-time Grammy-nominated band Goo Goo Dolls have released "The Audience is That Way (The Rest of The Show) Vol. 2" via Warner Bros. Records, a brand-new 10-track live album recorded across the band's recent tours. The record marks the second volume of a two-part compilation series and was preceded by the companion live album, "The Audience is This Way," which arrived on July 21. Each release contains 10 different never-before-heard recordings of some of their most iconic hits.
"The Audience is That Way (The Rest of The Show) Vol. 2" is available on all digital streaming platforms and via the band's website HERE. The band is currently in the studio working on a 12th studio album.
The album was recorded by John Schimke, and was produced and mixed by lead singer John Rzeznik, Chris Szczech and Brad Fernquist. Boasting transcendent songs such as "Black Balloon," "Name" and "Here Is Gone," the album visits territory from the band's full discography and captures its dynamic live presence that continues to result in sold-out audiences worldwide.
Earlier this month, the band announced it will embark on a massive 2019 summer co-headlining tour with Grammy-winning, multi-Platinum-selling band Train. The tour will feature special guest Allen Stone and hit more than 39 stops across North America. For more information and tickets, visit GooGooDolls.com.
Goo Goo Dolls recently wrapped a successful tour in celebration of the 20th anniversary of their acclaimed album, "Dizzy Up the Girl." At each show, the band performed the record in its entirety, along with an additional set of surprises and other hits from their repertoire.
"The Audience is That Way (The Rest of the Show) Vol. 2" Track listings:
Side One:
1. "Stay With You (Live)"
2. "Here Is Gone (Live)"
3. "Naked (Live)"
4. "Name (Live)"
5. "Black Balloon (Live)"
Side Two:
1. "Over And Over (Live)"
2. "Bringing On The Light (Live)"
3. "Come To Me (Live)"
4. "Let Love In (Live)"
5. "Boxes (Live)"
2019 New York show dates include:
Categories
Entertainment On Stage feature Top Entertainment News
comments powered by Disqus