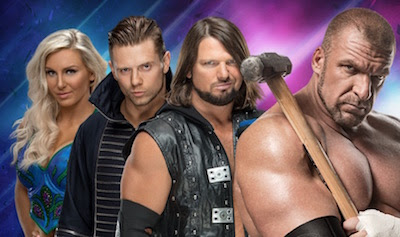 Fri, Aug 10th 2018 05:00 pm
WWE Superstars Triple H, A.J. Styles, The Miz and Charlotte Flair will be at Fan Expo Canada for the first time in show history to take part in "WWE Night." During a special one-day-only event on Thursday, Aug. 30, WWE fans will have a chance to meet their favorite Superstars for an evening of autograph signings and photo ops.
"WWE has one of the most devoted audiences in fandom and we're excited to offer them the opportunity to come together and celebrate their love of WWE at Fan Expo Canada," said Andrew Moyes, vice president, Fan Expo HQ. "Bringing this unique event experience to our fans is a natural evolution of our show and we're looking forward to building on this part of our programming in the future."
Fan Expo Canada is offering the Ultimate Package" to this event for passionate WWE fans, including admission to the show on Thursday, Aug. 30, the ability to jump the lines with a VIP Express Pass, and an opportunity to achieve super-fandom with an autograph and photo op from all four WWE talent.
To cap off "WWE Night" Triple H, A.J. Styles, The Miz and Charlotte Flair will come together for the main event, a panel discussion that is sure to answer all the burning questions of WWE enthusiasts. Admission to the panel will be granted with a pay-what-you-can financial donation in support of Connor's Cure, a nonprofit charity for pediatric cancer research founded by Triple H and Stephanie McMahon.
Fan Expo Canada will take place over the Labor Day long weekend, Aug. 30 through Sept. 2 at the Metro Toronto Convention Centre. Tickets are now available at fanexpocanada.com/tickets.
WWE Night Fan Expo Canada Schedule
Thursday, Aug. 30
For a complete list of guests, info and tickets, visit: www.fanexpocanada.com
About Connor's Cure
Connor's Cure was created by Stephanie McMahon and her husband, Paul "Triple H" Levesque, in 2014 to support pediatric brain and spinal cord cancer research. Connor's Cure was established in honor of 8-year-old WWE fan Connor Michalek, a patient at Children's Hospital of Pittsburgh of UPMC who battled medulloblastoma, a rare tumor that affects the brain and spinal cord.
In 2015, Connor's Cure launched a national partnership with the V Foundation for Cancer Research, ensuring 100 percent of all net funds raised directly benefits pediatric cancer research. To date, Connor's Cure has raised more than $2 million and assisted more than 260 families around the world.
Every year, 12,000-15,000 children are newly diagnosed with cancer in the U.S. Through the efforts of The V Foundation, progress is being made with cure rates for most pediatric cancers dramatically improving. The V Foundation has awarded more than $25 million in pediatric research grants.
Fan Expo Canada boasts the largest comics, sci-fi, horror, anime and gaming event in Canada, the third-largest in North America. It is packed with exciting, family-friendly activities and celebrity guests - this year including Michael J. Fox, Christopher Lloyd, Lea Thompson and Tom Wilson ("Back to the Future"); Cary Elwes, Chris Sarandon and Wallace Shawn ("The Princess Bride"); Jeff Goldblum ("Jurassic Park)"; Evangeline Lilly ("Ant-Man and the Wasp"); and William Shatner ("Star Trek"). The all-ages pop culture convention expects to host over 140,000 fans inside the 750,000-square-foot Metro Toronto Convention Centre. Visit www.fanexpocanada.com for more information.
Fan Expo HQ is the largest pop culture exhibition group in Canada and one of the largest in the world. Collectively it hosts over 500,000 fans annually at Fan Expo Canada, Fan Expo Vancouver, Fan Expo Regina, Fan Expo Dallas, Toronto Comic Con, Dallas Fan Days and MEGACON Orlando.
Categories
Entertainment Top Entertainment News