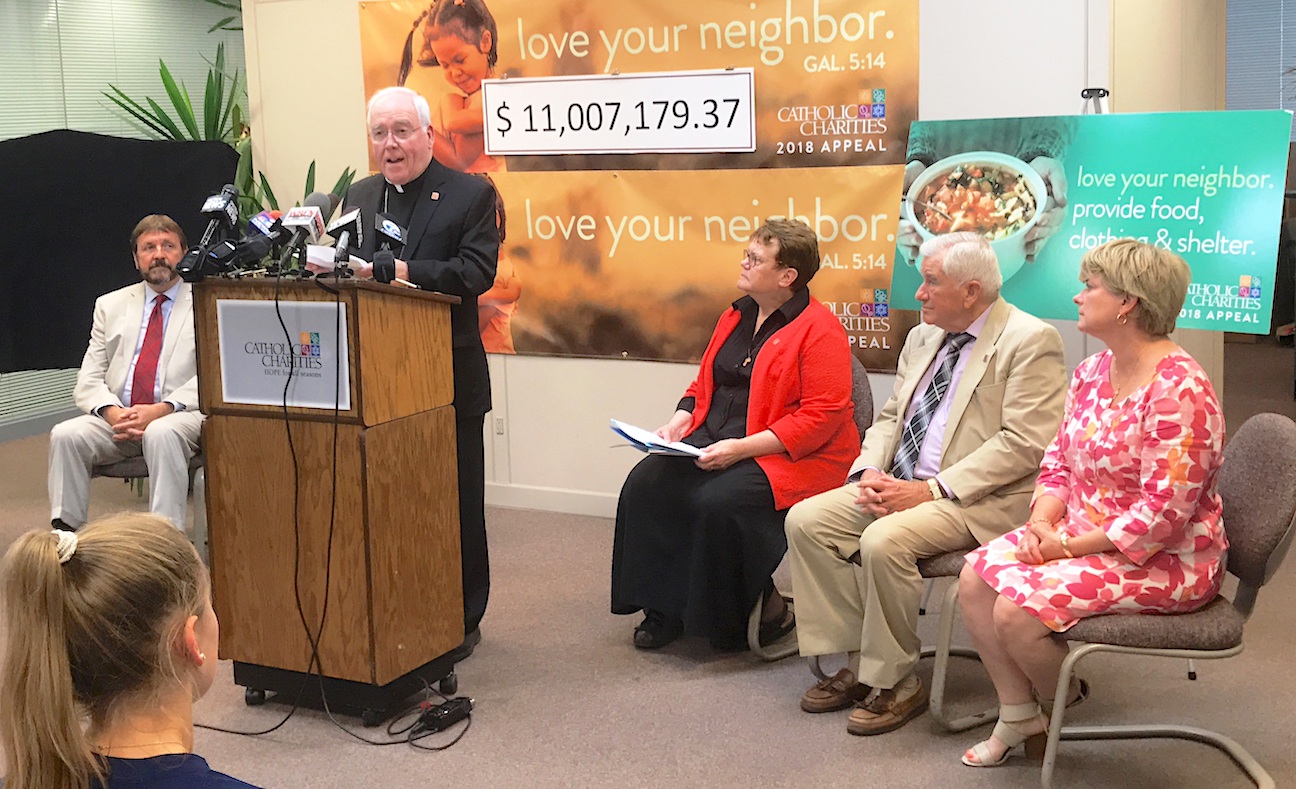 Wed, Jun 27th 2018 09:00 pm
94th annual Appeal surpasses its $11 million goal 4 days before its June 30 deadline, thanks to the community's support
Nearly six months of fundraising efforts by hundreds of volunteers throughout the Diocese of Buffalo and a late rally by the Western New York community have helped the 2018 Appeal for Catholic Charities surpass its $11 million goal.
At a morning news conference Tuesday, the Most Rev. Richard J. Malone, bishop of Buffalo, and Sister Mary McCarrick, diocesan director of Catholic Charities of Buffalo, announced the 2018 Appeal has reached $11,007,179.37, four days before its June 30 deadline. The total will change as additional dollars are received over the final days.
"When we launched this year's Appeal back in January, we knew it would be a challenge, but none of us knew just how big of a struggle it would be," Malone explained. "As recently as May 15, we faced a seemingly insurmountable shortfall of $1.5 million and it was evident we were at serious risk of failing to achieve our goal for the first time since 2010 - and only the fourth time in the Appeal's 94-year history.
"In the Book of Chronicles we are reminded to 'Be strong, and not give up, for our work will be rewarded.' Our Appeal leadership team, staff and many volunteers took these words to heart, as Sister Mary vowed to leave 'no stone unturned' in the effort to raise the additional monies needed to reach our goal. Our Appeal continued to inch its way upward in recent days and, indeed, our work has been richly rewarded. On behalf of Catholic Charities, and most importantly those we serve, I want to thank everybody who in any way contributed to our success."
McCarrick, who will retire at the conclusion of this year's Appeal after nine years as diocesan director, said it is a relief to know the organization will be able to carry out its plans for the coming year now that the goal has been met thanks to the community's support.
"The thousands of donors and friends who came forward to give small and large contributions - and then give again - brought us to this day and we are extremely grateful," McCarrick said. "I especially want to thank Robert M. Bennett, our 2018 Appeal chair, for his leadership, dedication and perseverance."
Bennett said, "The success of this 2018 Appeal has been the hard work and determination of multitudes, from donors to volunteers. Dozens of parishes exceeded their goals. The corporate team exceeded its goal. Our parish volunteers, clergy and leadership volunteers all have a hand in this success today."
He added, "The best news is that throughout this campaign we have been emphasizing the network of services available to individuals and families and we are going to be able to continue these now, and provide them in the efficient manner for which Catholic Charities is known."
Bennett thanked members of the leadership team, including his daughter, Maurine Falkowski, and son, Andrew Bennett, this year's Appeal co-chairs, and the parish, community and corporate divisions. He recognized the following for their contributions:
•St. Rose of Lima Parish in Buffalo for exceeding this year's goal by 24 percent, a standout among smaller parishes in the diocese. George Wopperer and his team were thanked for their efforts in raising $60,261 this year.
•Buffalo Academy of the Sacred Heart in Amherst for organizing two dress-down days and also reaching out to other schools to challenge them to do the same, with special thanks to Clare Falkowski, a student at SHA and Bennett's granddaughter. The school raised $2,794.40. From left: Bishop Malone, Russell Salvatore, Dennis Walczyk, Sr. Mary McCarrick and Bob Bennett.
McCarrick also acknowledged Russell Salvatore, the iconic restaurateur and long-time community benefactor, for stepping forward in the final days to help ensure another successful Appeal.
"Russell Salvatore has been a true friend to our organization and great supporter of the campaign for many years," she said. "He answered my prayers for assistance at a time when our situation was especially dire, saying he wanted to ensure the so-called 'drive that never fails' would again meet its goal. We are most grateful."
In appreciation for his donation and continued support, McCarrick announced the organization's Lackawanna Food Pantry would be named the Russell J. Salvatore Food Pantry and Outreach of Catholic Charities.
Funds raised during the Appeal help support the 70 programs and services provided by Catholic Charities at 61 sites throughout Western New York, along with a number of ministries that are part of the Bishop's Fund for the Faith. More than 153,000 lives were impacted by Catholic Charities over the past year alone and more than half of those who specify a faith are non-Catholic.
The theme of this year's Appeal is "Love your Neighbor," and the patron saint is Clare of Assisi.
Catholic Charities is the most comprehensive human service provider in the region, serving people of all ages, races, faiths and walks of life. It has helped individuals and families in need since its founding in 1923. That need is varied and widespread - from emergency assistance to mental health counseling and treatment, and from specialized services for older adults to help with job training and education.
Catholic Charities empowers children, families and seniors to achieve meaningful, healthy and productive lives. In all situations, Catholic Charities delivers support to meet immediate needs, and then assesses clients for other needs to ensure long-term success.
To donate to the 2018 Appeal or for more information, contact Catholic Charities at 716-218-1400 or go to ccwny.org. One can also join on Facebook, Twitter and Instagram.
Categories
Around WNY Around WNY news list Home feature NFP