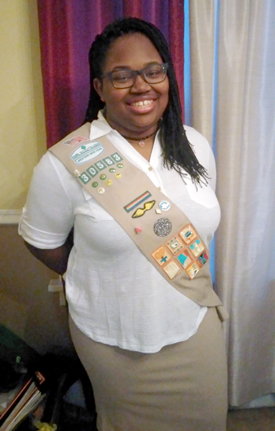 Fri, May 18th 2018 09:05 pm
Girl Scouts of Western New York has announced Camille Chambless of Buffalo as a 2018 Gold Award Girl Scout. Chambless' project, "The Give and Take Closet," provides donated clothes to those in need. The closet is run two to three days a week at Mount Moriah Missionary Baptist Church.
Chambless said, "I chose my project because I know so many people who want nice things, but have to take care of their houses and children so they can't get them. I know so many people who keep a lot of stuff that they don't really use. The purpose of my project was to bring all those people's unused stuff together in a nice, safe place so people could have what they need without being ashamed or embarrassed."
Chambless also commented about her Girl Scout experience: "I have learned to take care of other people and the value of being a good person. I also learned to be independent, adventurous and friendly. I have traveled, participated in lots of crafts and activities and prepared for college. I'm a better person because of my years in Girls Scouts."
She has been a Girl Scout for 12 years. Chambless will receive her accolade at the Gold Award Ceremony on June 2. The Gold Award is the highest award in Girl Scouts.
The Gold Award project is the culmination of all the work a girl puts into "going for the gold." A Girl Scout's project should be something that a girl can be passionate about - in thought, deed and action that encompasses organizational, leadership and networking skills. The project should also fulfill a need within a girl's community (whether local or global) and create change that has the potential to be ongoing or sustainable. Approximately 80 hours of community service are involved in the project. Completion of the Gold Award also qualifies the Girl Scout for special scholarship opportunities.
The Girl Scout Gold Award acknowledges the power behind each recipient's dedication to not only empowering and bettering herself, but also to making the world a better place for others. These young women are courageous leaders and visionary change makers.
The Gold Award requires a Girl Scout to identify an issue and investigate it to understand what can be done to address the problem. The girl then forms a team to act as a support system, including a project adviser close to the issue who is not a troop leader or family member, while she leads the project. The Girl Scout creates a plan to ensure she knows what steps to tackle while working on the project. The Girl Scout submits a proposal for her project to her local Girl Scout council. After acceptance, the girl begins to work through the steps of their plan utilizing the assistance of her support team where necessary. Lastly, the project is used to educate and inspire others about the cause they are addressing.
To learn more, visit gswny.org.
Girl Scouts of Western New York serves nearly 15,000 girls and 7,000 adult volunteers across the GSWNY jurisdiction, including Cattaraugus, Chautauqua, Erie, Genesee, Livingston, Monroe, Niagara, Orleans and Wyoming counties. The council's administrative service centers are located in Batavia, Buffalo, Jamestown, Lockport, Niagara Falls and Rochester.
Categories
School