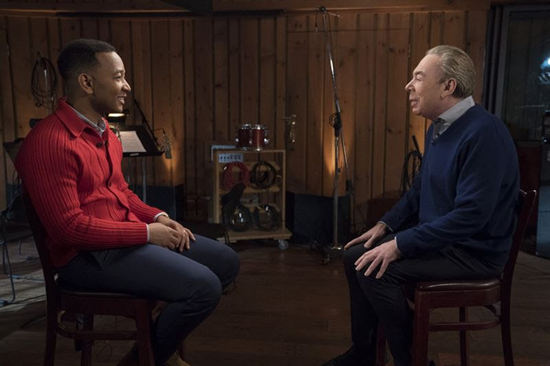 Mon, Mar 5th 2018 01:25 pm
Glenn Close, John Legend, Lin-Manuel Miranda join celebration for icon's birthday
In a festive 70th birthday celebration honoring one of theater's most celebrated composers, NBC is set to air "Andrew Lloyd Webber Tribute to a Superstar" on Wednesday, March 28 (10 p.m. ET/PT).
Lloyd Webber, who helped shaped musical theater as it is known today, is responsible for some of Broadway's greatest and most recognizable productions, including "Joseph and the Amazing Technicolor Dreamcoat," "Jesus Christ Superstar," "Evita," "Sunset Boulevard," "Cats," "The Phantom of the Opera" and "School of Rock."
The evening will include conversation and reflection with Lloyd Webber along with some of today's most esteemed names in entertainment. The special will feature theatrical legend Glenn Close, music star John Legend (who will play the titular role in "Jesus Christ Superstar Live in Concert," Sunday, April 1 on NBC), Broadway revolutionary Lin-Manuel Miranda and an appearance by the Young People's Chorus of New York City.
Also in celebration of his 70th birthday, Lloyd Webber will release a new album, "Andrew Lloyd Webber: The Platinum Collection" (Ume/Polydor; March 16), as well as his autobiography, "Unmasked, (published by HarperCollins on March 6)." In "Unmasked," Lloyd Webber shares the details of his early personal and professional years, including his early artistic influences, with his signature humor and self-deprecating tone. He takes stock of his achievements, the twists of fate and circumstance that brought him both success and disappointment, and the passions that inspire and sustain him.
Last year, Lloyd Webber became the only person to equal the record set in 1953 by Rodgers & Hammerstein with four shows running concurrently on Broadway ("Sunset Boulevard," "Cats," "The Phantom of the Opera" and "School of Rock"). Two of his shows are currently running on both Broadway and the West End: "School of Rock" and "The Phantom of the Opera." His musicals have grossed more than $13.6 billion and have been watched by 300-plus million people across 44 countries. He has sold more than 40 million albums worldwide. In addition to his worldwide sales and audiences, Lloyd Webber has been recognized by critics and peers with numerous accolades and awards, including seven Oliviers, seven Tonys, three Grammys, one Golden Globe and an Oscar.
This year, his shows will be seen in over 200 cities around the world. Lloyd Webber owns seven West End theaters, including the world famous London Palladium and the Theatre Royal Druly Lane.
Lloyd Webber is passionate about the importance of music in education and the Andrew Lloyd Webber Foundation has become one of Britain's leading charities supporting the arts and music. In 2016, the foundation funded a major new national initiative, which endowed the American Theater Wing with a $1.3 million, three-year grant to support theater education opportunities for underserved young people and public schools across the U.S.
Categories
Entertainment Entertainment feature OYT