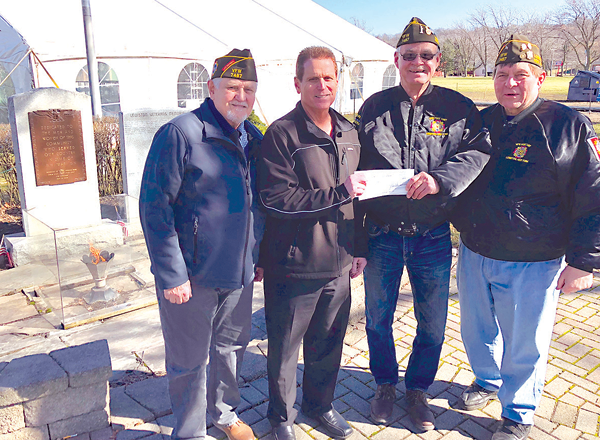 by jmaloni
Sat, Mar 3rd 2018 07:00 am
Modern Disposal's Robert Trunzo, second from left, presented a check to Veterans of Foreign Wars (Downriver Post No. 7487) members Vince Canosa, Bill Justyk and Matt Zarosl on Tuesday. The money will go toward a restoration project inside Academy Park in Lewiston.
The three veterans explained the post intends to renovate the area underneath the three memorial stonewalls, plus replace the foliage and the benches, and add lighting and security cameras. Depending on funding (the project may cost upward of $30,000), the stonewalls and eternal flame might also be replaced.
The men said area veterans lost to war deserve a refurbished place of remembrance.
"We just want to make it more appealing to people who come here," Canosa said.
Planning for this project is underway. Construction may not begin until later this year or next year, and is expected to take two years to finish.
Canosa said the annual Memorial Day observance ceremony will go on as planned. The event is held each year at the foot of the memorial site.
Restoration funds have also come from DiMino Tops Lewiston and Favorites Pizzeria.
Those looking to make a donation can send a check to Restore Academy Park Memorial, care of Veterans of Foreign Wars of the U.S., Down River Post No. 7487, P.O. Box 1164, Lewiston, NY 14092.
The post also is looking into grants and tourism funding.
Members will seek guidance and design approval from the Village of Lewiston.
(Photo by Joshua Maloni)