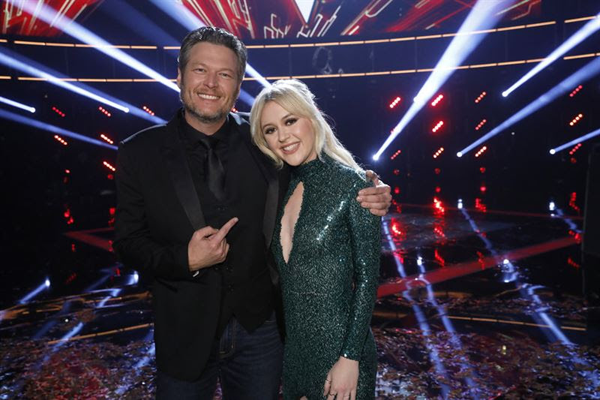 Wed, Dec 20th 2017 12:40 pm
Popular member of Team Blake earned America's top vote and will join 'The Voice: Neon Dreams' residency at Hard Rock Hotel & Casino in Las Vegas
Twenty-three-year-old psychedelic rock singer Chloe Kohanski of Nashville was crowned champion of NBC's four-time Emmy Award-winning musical competition series "The Voice" on Tuesday.
She faced tough competition with the other fop finalists, including Addison Agen from Team Adam, Red Marlow from Team Blake and Brooke Simpson from Team Miley.
This season of "The Voice" concluded tonight at Universal Studios, California, with a star-studded live finale featuring superstar recording artists Kelly Clarkson (who joins "The Voice" as a coach in the spring), Demi Lovato, N.E.R.D., Charlie Puth, Sia and Chris Blue. Additionally, the finale featured an array of musical collaborations with the top eight artists and musicians across all genres, including Bastille, Vince Gill, Billy Idol, Jessie J, Norah Jones, Bebe Rexha and Sia.
During the blind auditions, Kohanski impressed the coaches with her performance of Fleetwood Mac's "The Chain," which earned her chair turns from coaches Miley Cyrus, Jennifer Hudson and Blake Shelton. She chose Team Miley, and, during the "Knockout Rounds," she gave a dynamic performance of Stevie Nick's "Landslide," which led to a steal by Shelton.
Continuing the competition with Team Blake, Kohanski delivered an impressive interpretation of Cyndi Lauper's "Time After Time" during the playoffs, which earned her a spot in the Top 12. Throughout the live shows, her performances of "Thank You" by Dido, "Total Eclipse of the Heart" by Bonnie Tyler, "Call Me" by Blondie and "I Want to Know What Love Is" by Foreigner, led her all the way to the finals.
Kohanski is only the third singer in "Voice" history to hit No. 1 on the iTunes singles chart three times in one season for her performances of her original song "Wish I Didn't Love You," "I Want to Know What Love Is" and "Total Eclipse of the Heart." Kohanski is in top company, as the previous two singers with distinction are season three "Voice" winner Cassadee Pope and season nine winner Jordan Smith.
Born and raised in the music city of Nashville, Kohanski was the only musician in her family and always knew she wanted to become a singer. After graduating high school, she went to college to become an English teacher, but decided to join a blues band instead. After a short stint with the band, she decided to move in a new direction, embarking on a solo career that led her to auditioning for "The Voice."
Kohanski has earned the grand prize of a recording contract and will also join the cast of "The Voice: Neon Dreams," which premieres in the spring at the Hard Rock Hotel & Casino in Las Vegas. At the first ever "Voice" residency, Kohanski will join "Voice" season 10 winner Alisan Porter along with finalists Matt McAndrew, Matthew Schuler, Mary Sarah, Chris Mann and Michael Sanchez as they perform eight shows a week for "Voice" fans from around the world.
NBC's four-time Emmy award winning musical competition series "The Voice" is once again reigning this fall as the No. 1 alternative series in 18-49 and total viewers. The show is currently averaging a 2.6 rating with its Monday and Tuesday telecasts in the 18-49 demographic and 12.0 million viewers, according to "live plus seven day" ratings from Nielsen Media Research. So far this season, every Monday and Tuesday "Voice" original has finished among that week's top 10 entertainment programs on the broadcast networks in 18-49.
Fans can visit http://www.nbc.com/TheVoice.
About 'The Voice: Neon Dreams'
Staged in a new custom theater at Hard Rock Hotel & Casino, "The Voice: Neon Dreams" is an innovative concert experience serving as the next step in the musical journey for some of the greatest artists from NBC's hit show "The Voice."
"The Voice: Neon Dreams" features a dynamic nine-piece band and an all-star cast of vocalists featuring past winners and fan favorites performing a wide-ranging catalog of musical genres and chart-topping hits by artists such as Michael Bublé, the Beatles, Carrie Underwood, Mozart, Andrew Lloyd Webber, Green Day, the Beach Boys, Puccini, Coldplay, U2, Lady Gaga, Johnny Cash, Aretha Franklin, Fleetwood Mac and others.
Guests will get unprecedented access into the world of "The Voice" through an interactive exhibition-style lobby space featuring the show's original signature chairs signed by the coaches who used them. Other features include an interactive exploration of "The Voice" around the world, where fans can discover stories of hope and perseverance and dig deeper into the show; the digital "Coaches Corner," featuring memorabilia and information about the A-list coaches; and a chance for ticketholders to chase their own "Neon Dreams" by recording an audition in one of four cutting-edge recording suites for a chance to sing onstage that night and compete for a coveted spot on a future season of "The Voice."
To purchase tickets for performances (starting in the spring) or for more information, visit TheVoiceVegas.com.
Categories
Entertainment OYT