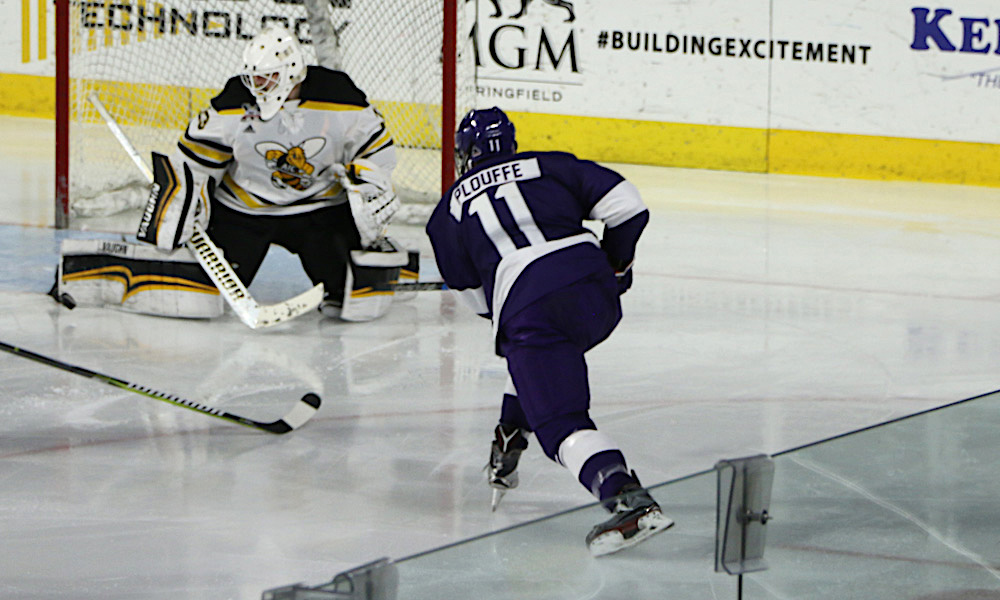 NU's Derian Plouffe with a shot on goal.

Sat, Dec 2nd 2017 08:30 pm
By Olivia Rinaldo
There's no time to rest for the Niagara men's hockey team, as working toward success is time-consuming. The team meets for skating Monday through Thursday and workouts take place Monday through Wednesday. On Fridays, the team has games, so the skates are optional.
Practices last anywhere from 45 minutes to an hour and a half, with time afterward dedicated to perfecting the players' skills. It's also done in groups, too. Monday through Wednesday, the team is given the option to work on skills with coaches in small groups.
When asked if this contributed to the success of the team, a handful of guys answered, "Yes."
"It definitely helps us, because that's when we can work on our 'me' game and our skills as an individual. Then, once practice hits, we can work on our 'we' game and playing together as a team," freshman Zach Mills said.
This past weekend, the team traveled to American International College in Springfield, Massachusetts, to take on the Yellow Jackets in a two-game series. The series was split 1-1, with Niagara having an impressive outing. The team has been doing exceptionally well this year, with strong goaltending and more scoring. The team seems to have more drive and can keep up with tougher opponents, but it wasn't always like this.
Last season, the Niagara men's hockey team went 5-31-3 under Coach Dave Burkholder. The team lacked chemistry and drive, and most games were depressing to watch. This season, the team is 8-5-1, which is already better than last season's campaign. Some say this is due to the team's coaching change, while others say this year's fresh talent has given the team a clean slate.
On April 24, Niagara Athletics announced Jason Lammers would take over as head coach of the team. The overall feeling was excitement; the players were excited and students were hopeful.
That doesn't mean that some weren't upset or nervous. Burkholder ran the team for 16 seasons with a decent record. In those seasons, he had 247 wins, two CHA tournament championships, two CHA regular-season titles, one AHA regular-season title, and three trips to the NCAA tournament. In 2006 and 2007, he was named the College Hockey America Coach of the Year and, in 2013, he was named Atlantic Hockey Coach of the Year.
However, when those who were skeptical of Lammers were faced with his resume, it was hard to argue with this new hire. Lammers has 15 years of NCAA coaching experience, from notable schools such as University of Massachusetts-Lowell, Colorado College and Ohio State University. Though he wasn't the head coach of all these teams, he has established a solid record of 164-98-23. He has also has been to the NCAA Tournament six times, with four trips to the Elite Eight, and an appearance at the Frozen Four in 2013.
These stats don't even touch on his accomplishments in junior hockey.
For the past two years, Lammers was the head coach and general manager of the Dubuque Fighting Saints in the USHL. The USHL is the top junior league in the U.S., with all players under the age of 20. In the 2015-16 season, Lammers lead the team to win the USHL Eastern Conference's title and they made an appearance in the USHL finals. The team also had the second-most wins in the franchise's history with a record of 39-19-2.
The 2016-17 season had similar results: an appearance in the Eastern Conference Finals, finishing with a second-place win. His team in Dubuque was so good, because Lammers had a heavy focus on developing offense, specifically goal scoring.
So what is different with the Niagara team this year? Why are they so much better in their first 14 games than they were all season?
Besides coaching, the new additions to the team have brought a new feeling of "fresh" to the locker room. In total, there are 11 new players (eight freshman and three transfers). 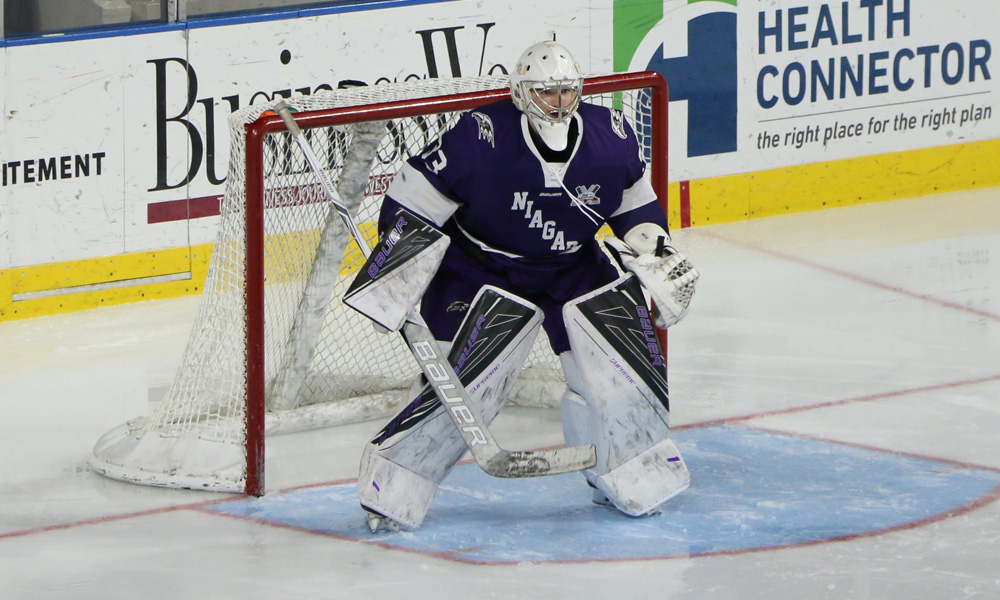 NU's Brian Wilson in net.
One freshman sparking conversation is Brian Wilson, the 6'4 goaltender from Pickering, Ontario. Last season, Wilson posted a record of 22-11-1, with 2.70 goals against average and a .917 save percentage. In the post-season, his numbers improved to 1.99 goals against average and a .938 save percentage. Not surprisingly, these numbers are the reason he was named the "Unsung Hero" by his teammates.
This year doesn't seem to be too different for Wilson. So far this season, he is tied for third in Atlantic Hockey goals against average (2.43) and is tied for fifth in the division for wins (5).
Since his first time in net, Wilson has played every minute in goal and has remained calm under pressure. He remains solid with a 5-3-1 record and has a .908 save percentage. When playing against fellow Atlantic Hockey opponents, Wilson's save percentage is .920.
Some of the other contributions to the team's success aren't from newcomers, but from returning players. Leading the team with points is senior Derian Plouffe. Plouffe has played in all 14 games and has racked up 18 points (9 goals, 9 assists). Another notable player this season is sophomore Noah Delmas. In 14 games, Delmas has 17 points (1/16). He is currently is leading all NCAA defenseman in assists. Lastly, junior Tanner Lomsnes is the team's leading goal scorer with 11 goals on the season. He has 5 assists and has played in all 14 games this season.
This weekend, the Niagara Purple Eagles travel to the Air Force Academy in Denver to take on the Air Force Falcons. After this contest, they take on their Atlantic Hockey rival Canisius College in a home-and-home series.
Categories
NUsUnlimited NUsUnlimited Side Story