Fri, Dec 1st 2017 04:00 pm
By Julia Voutour
The 21st century has been an era of growth and a booming time for technological development all around the world. The use of cell phones, social media and countless other forms of technological interaction continues to grow in popularity as we approach 2018. These developments have revolutionized the world of communication and continue to change how we as humans interact with each other on a daily basis. There is no question that these developments have changed our world, but the question is whether they have done so for the worse or the better. It is a question up for debate all around the world. Statistics and professional studies can back up both of these arguments but, ultimately, we all develop our own opinion on the matter.
Cell Phone Use
In 1973, Motorola was the first company to create a handheld mobile phone. Although this cell phone was created over 40 years ago, the demand and extreme popularity of the cell phone did not come about until the late '90s (with the creation of the Nokia 9000) and early 2000s.
•Personal Study
To first start off my research, I conducted a study to see how much the average teenager uses their phone a day, as well as how often they check various popular social media websites, including Instagram, Twitter and Snapchat.

I have a 15-year-old sister who is a sophomore in high school. She has an iPhone, which conveniently allows one to view how much time one spends on a specific social media website in the past week. Upon looking at her Snapchat, I discovered she spent 9.7 hours in the past seven days, averaging about an hour and a half per day on Snapchat. In second place, came her Instagram use: 5.6 hours a day, averaging about 48 minutes a day on Instagram. Trailing not far behind was her Twitter use, at 3.4 hours spent a week on it, or about 29 minutes a day. Finally, the number of total hours spent on her cell phone in the past 24 hours was nine hours and 37 minutes (although this may vary on a week day when she is in school for six hours, as this study was conducted on a Sunday).
These results may be shocking to some or very believable and expected for others. Instagram, Twitter and Snapchat only scratch the surface of the applications she uses on her phone each day. She is an average teenager in the United States, on the same social media platforms as most teens are and using other common things on her phone that most adolescents use as well.
After reading these results and from your other knowledge regarding the subject, you may look at cell phones as being a negative or a positive contribution to society. The following are views from both ends of the spectrum:
•Positives of Cell Phone Use
To start off, cell phones are a very convenient way to access information or make contact with someone you are not with. For example, a teenager with their license ends up lost in an area they do not know their way around or how to get home. Most cell phones today offer maps, as well as navigation tools that offer step-by-step directions on how to reach your destination. They also offer comfort to many parents that are not constantly with their child, knowing they have a way to reach them at any given time. The average smartphone also includes devices that allow parents to track where their children are to confirm they are safe and where they are supposed to be at any given minute.
Cell phones also have the capability of developing responsibility and good behavior within a child. A cell phone can be used as an incentive for good behavior and can be a good motivator to act kindly and follow rules. Failure to do so can result in a parent taking the phone away from a child for a certain amount of time, almost guaranteeing they won't act that way again. It can also be used as a way to teach responsibility, as some cell phones have a range of minutes or a number of text massages allowed to be sent.
•Negatives of Cell Phone Use
Cell phones can be a big distraction when it comes to important things to focus on, like schoolwork or simply face-to-face conversation. They can also be distracting during situations in which it is important to pay attention, for example, crossing the street.
An issue many schools have encountered is an increase in cheating, as more and more children obtain cell phones. Texting other students for answers or searching for them on the internet are a few ways they may cheat in school. 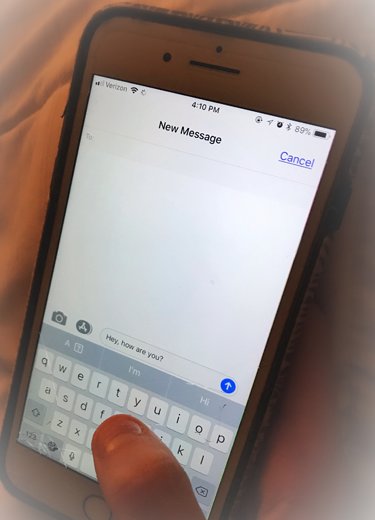 •Mobile Phones and Driving
One of the biggest controversies when it comes to cell phone use is texting and driving. There is an alarming number of car accident-related deaths and injuries as a result of distracted driving from cell phones. The Federal Communications Commission's most recent study, conducted in 2015, shares disturbing statistics related to the matter. Over eight people are killed and 1,100 are inured daily as a result of distracted driving. The National Highway Traffic Safety Administration reported there were 3,477 people killed and an estimated 391,000 injured as a result of motor vehicle crashes involving distracted drivers.
For more information and other statistics, visit, https://www.fcc.gov/consumers/guides/dangers-texting-while-driving.
•Niagara County Sheriff James Voutour, co-chair of the National Sheriffs Association Committee on Traffic Safety, stated, "Driver inattention is one of the leading causes of car crashes. Almost every driver has some type of wireless device in their vehicle, and our society has grown into a constant contact era. Texting, checking emails and viewing social media has become so prevalent in recent years that drivers have a difficult time separating driving and that feeling of need for immediate interaction."
While technology is one of the main culprits when it comes to distracted driving, ironically, the cell phone itself does have ways of preventing one from using it while you drive. There are many free apps available to help you or someone in your family to drive without distractions. By visiting the app store enabled by your cell phone provider, you can take advantage of these useful tools.
Social Media
Social media is one of the fastest growing uses of the internet today, specifically in teenagers. It is an easy way to interact with friends and the rest of the world when you are not constantly with them.
One of the biggest distinctions between social media and normal mobile phone usage is the size of the audience reached when sharing information. You are no longer sharing your information with one person, but a large array of people at once.
This can be both a good and a bad thing depending on how this technology is used. Social media has the power to educate students effectively, simply because of the fact it is the medium they are most likely going to receive the information, and it is being done so on a larger scale. It encourages kids to be more creative, think outside the box and then share their creativity with the rest of the world.
Although many positives come from using social media, it can turn negative quickly if used the wrong way. Since the popularity increase of these sites, there has also been a new kind of bullying developed, known as cyber bullying. Social media can become an easy environment to bully, as the bullies feel more power and confidence in what they are saying, because they are behind a computer screen and not face to face with their victim.
Contrary to that, the social media world can be a very positive and safe world for some teens who are struggling with their own issues. Social media opens doors to all sorts of people one you may not encounter on a daily basis. Beautiful connections can be made, and those struggling are more likely to find someone they can relate to - in turn making them feel as though they aren't alone in their situation.

Jay Baer, New York Times best-selling author, keynote speaker, and the president of social media marketing firm Convince, said, "It's the art of misdirection. Throwing a compliment at somebody in the middle of negativity turns the situation around, and brings the power back to you."
Categories
NUsUnlimited