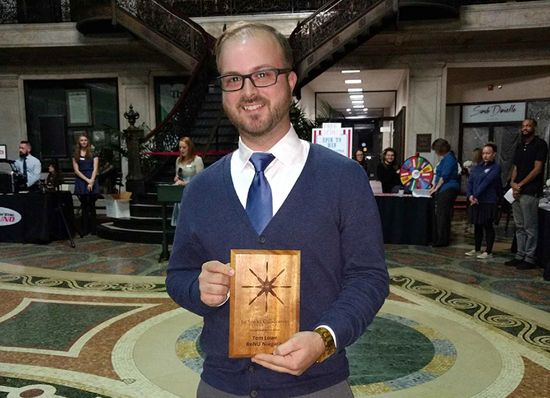 Mon, Nov 6th 2017 11:10 am
Tom Lowe, director of IMPACT/ReNU Niagara at Niagara University, received the Champion of Service Award from the Service Collaborative of Western New York during the organization's Sweet for Service event on Saturday.
A Youngstown native, Lowe earned a bachelor's degree from SUNY Fredonia in 2009, before returning to Niagara County to serve as an AmeriCorps VISTA with ReNU Niagara. He focused much of his year of service learning grant-writing and assisting in the development of a community garden for the city of Niagara Falls. He later became a program coordinator with ReNU and was named director of the program in June 2013.
Lowe has served in his current role as director of IMPACT/ReNU Niagara, Niagara University's community outreach office, since June.
In addition to his full-time role with Niagara University, Lowe is active in numerous community-building programs, largely on a volunteer basis. He currently chairs the Niagara Beautification Commission and is a member of the board of directors for the Niagara Falls National Heritage Area.
One of Lowe's proudest accomplishments, he said, has been his participation with the development of LiveNF, a City of Niagara Falls initiative that seeks to change the negative mindset of residents to a positive and forward-thinking one.
Lowe is a 2014 graduate of Leadership Niagara and the Lois Gibbs Fellowship, a program of the Clean Air Coalition of Western New York. He was chosen as an Environmental Champion by the Federal Environmental Protection Agency.
To learn more about the IMPACT/ReNU Niagara programs at Niagara University, visit www.niagara.edu/impact.
Categories
NFP School feature Top Around WNY Feature