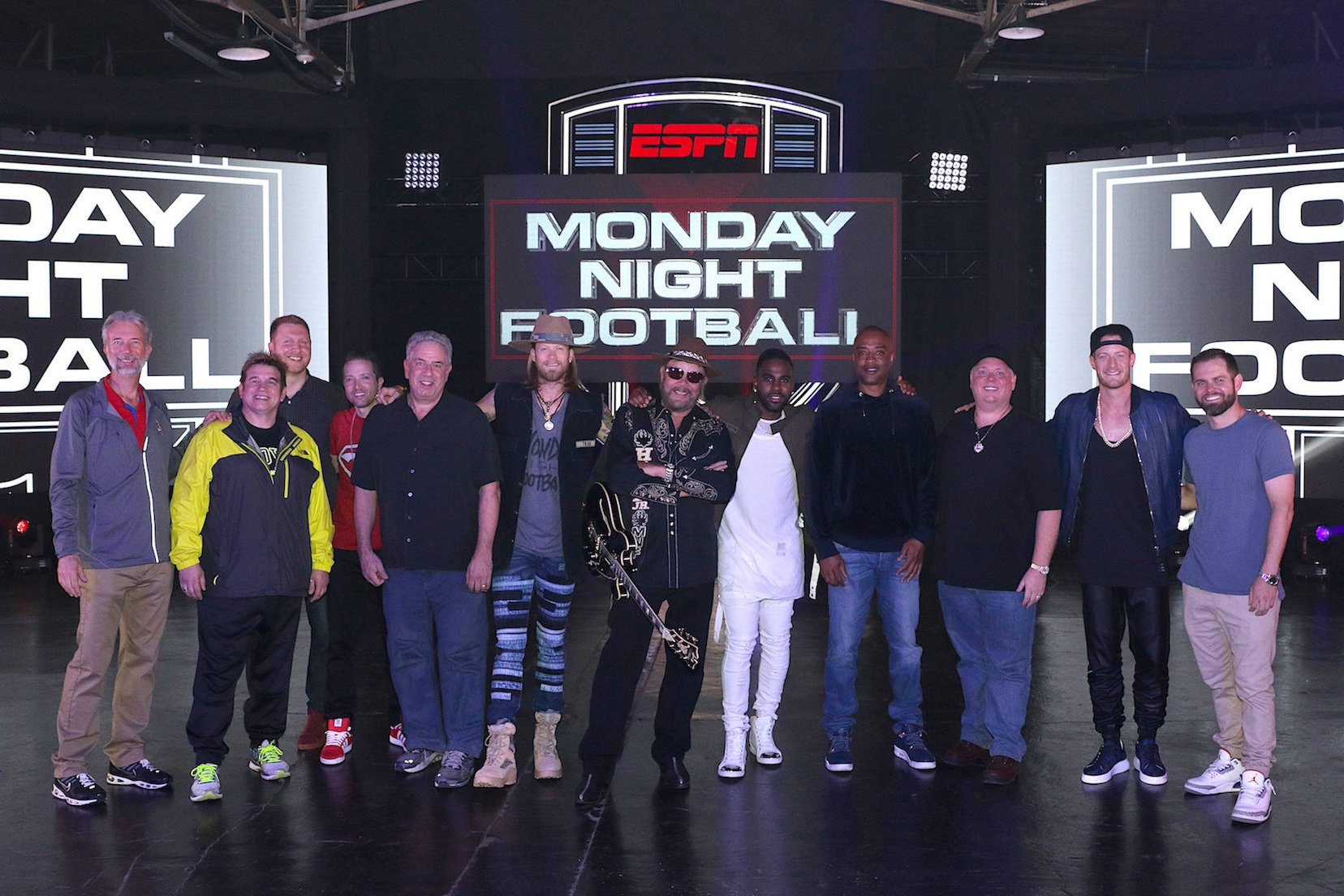 Thu, Jun 8th 2017 10:55 am
ESPN's "Monday Night Football" will feature the return of its iconic anthem this fall when legendary country singer Hank Williams Jr. kicks off the weekly Monday primetime game by asking NFL fans: "Are You Ready for Some Football?"
Every Monday night during the 2017 NFL season, Williams will perform his hit song "All My Rowdy Friends Are Coming Over Monday Night" with superstar duo Florida Georgia Line and multiplatinum recording artist Jason Derulo.
Williams returns to "MNF" for the first time since 2011 to perform the show's opening anthem for an unprecedented 24th season, a ritual that has earned him four Emmy awards (1991-94) and national acclaim among legions of football fans.
Florida Georgia Line and Derulo will appear in the "MNF" video for the first time.
" 'Monday Night Football' has the most famous music video in sports television. It's time to bring it back," said Stephanie Druley, senior vice president, ESPN events and studio production. "The combination of Hank Williams Jr. with Florida Georgia Line and Jason Derulo will get fans excited and ready for kickoff every Monday night on ESPN this fall."
The "MNF" kickoff video features team-specific lyrics and visuals each week based on the 17 regular-season ESPN matchups. All three artists recorded audio tracks in May. They filmed the opening video together June 4 at the Marathon Music Works in Nashville.
"I started in 1989 when ABC was celebrating the 20th season of 'Monday Night Football,' " Williams Jr. said. "It soon became a staple that fans grew to expect and wanted to see and hear. I am thrilled to be back and bring the fans such a new and dynamic rendition of this anthem.
" 'Are You Ready For Some Football?' Cause I sure am!"
Ricky Reed (Nice Life Recording Co.), a 2016 Grammy Award nominee for Producer of the Year, is the music director. Mike "Spike" Szykowny (producer) and co-directors Lucas Nickerson and Chris Mantzaris of ESPN Creative Services are overseeing production of the video, with "MNF" producer Jay Rothman and Vice President, Creative and Studio Direction Bob Toms. Habana Avenue produced the video shoot.
"This is a huge honor to be a part of such a legendary song and night!" said Florida Georgia Line's Tyler Hubbard. FGL's Brian Kelley added: "We all grew up watching 'Monday Night Football,' and it's surreal to join Jason Derulo and Hank Williams Jr. on this new version that gives a nod back but also a step forward!"
Said Derulo: "It's truly momentous to be featured in the 'Monday Night Football' anthem for the upcoming season. I feel the opening song sets the tone and energizes the fans before kickoff, and this year I'm putting my swag on it."
Categories
Entertainment Entertainment feature OYT
comments powered by Disqus