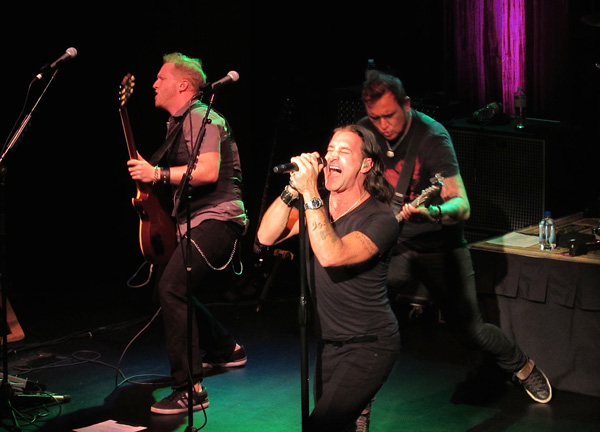 Scott Stapp on stage in Niagara Falls in 2014. (File photo)

'Live and Unplugged: Scott Stapp of Creed' 2017 Tour with special guests Art Of Dying and Jeremy of Willet

The Historic Riviera Theatre and Performing Arts Center announces "Live and Unplugged: Scott Stapp of Creed" 2017 Tour with special guests Art OF Dying and Jeremy of Willet. The show is on stage at 7:30 p.m. Wednesday, May 24.

Doors open at 6:30 p.m. for the all-ages show. Reserved tickets are $31.50. VIP packages are available. A pre-sale Riviera Theatre members runs from noon Wednesday, March 29, through noon Friday March 31. The artist VIP pre-sale runs at the same time. The general on sale begins at noon on Friday.

Tickets are available in person at The Riviera Theatre box office, 67 Webster St., North Tonawanda; by phone at 716-692-2413; in person at World Hollywood Entertainment inside the McKinley Mall; and online 24/7 at www.RivieraTheatre.org.

Stapp's artistic and personal journey have encompassed all the talent and torment imaginable in scaling to musical success. The founding member of Creed chronicled his questions, his quest for answers, and his dreams from faith to fatherhood in chart-topping hit, "My Own Prison," "Higher," and "With Arms Wide Open," which dominated the sonic landscape of the '90s-2000s. His soul-piercing lyrics backed by thundering rock riffs garnered a Grammy Award, and countless other accolades of creativity and chart domination, not to mention legions of fans, who felt a kindred spirit in his honesty.

Creed toured extensively through its reign atop rock music, but for Stapp, the musical machinery to keep the show going meant some terrible personal cost, as he sunk into depths of depression, prompting self-medication that turned to addictive behaviors. His creativity, passion and desire to be transparent in his struggle never waned, and were evident on his debut solo album, "The Great Divide" (2005), the "Full Circle" album from a "rebirthed" Creed in 2009, several tours, his starkly revealing memoir, "Sinner's Creed" (2012), and his highly acclaimed second solo album, "Proof of Life," in 2013, which brought Stapp's first No. 1 song on the Christian charts.

With the love and support of his family, Stapp has continued to live a balanced, healthy and sober lifestyle, grounded in faith. He has a fresh purpose in performing, writing and singing, to bring hope to "even one person" who is amidst the kind of struggle he knows. Hope has always been a theme of his music, and now, that level of hope takes on a whole new dimension.

In gratitude for the many interventions made in his behalf, Stapp devotes himself to "paying it forward" to others in need through numerous outreaches. He created the "With Arms Wide Open Foundation" in 2000 to help underprivileged children and families around the world. The foundation has donated over $1 million to various causes. He is also involved with CHARM (Children are Magical), which his wife founded to heighten the awareness of children's issues and provide underprivileged youth with the tools to enrich their lives.

Stapp performed across the country in 2016 ending a successful solo tour with an international tour with his first-ever stops in South Africa this past December.

In addition to his thriving solo career, Stapp is also the lead singer of the new super-group Art of Anarchy, whose first album with Scott, "The Madness," is due out March 24.

Stapp will celebrate the 20th anniversary of Creed's "My Own Prison" with his "Live and Unplugged" tour in May and June of this year. 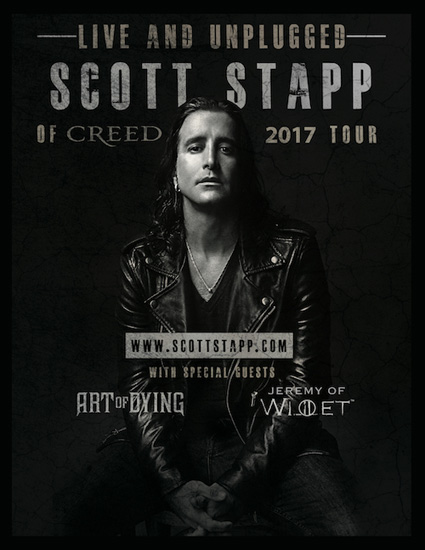 Photo provided by The Riviera Theatre