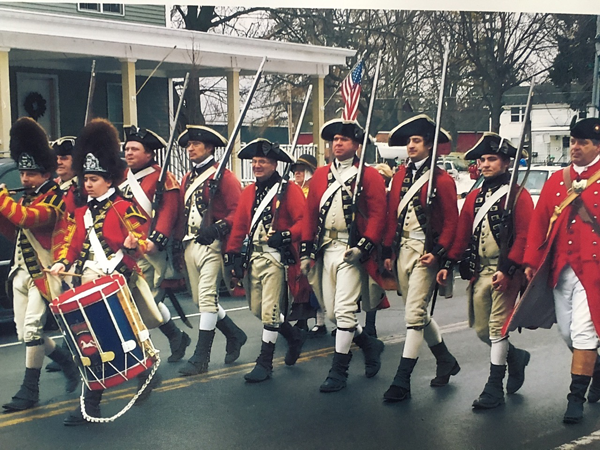 Shown is a past march. (Submitted photo)

Fifes, drums & new waistcoats will parade in Youngstown on March 18

Old Fort Niagara field musicians will participate in the Youngstown St. Patrick's Day Parade on Saturday, March 18, starting at noon, in the village. The musicians will play the fifes and drums and wear, for the first time, the waistcoats sewn by Niagara University students during the fall 2016 semester.

The corps of musicians will consist of two drummers, two fifers and four new recruits who will march for the first time. They will parade with British soldiers from Old Fort Niagara's interpretive department.

"We are proud to wear the waistcoats that were made specifically for us by Niagara University students in our community's St. Patrick's Day parade," said Suzannah Emerson, Old Fort Niagara's field music coordinator. "Some of our new musicians will also perform in public for the first time."

The 1770s British 8th Regiment waistcoats are vests, made of white wool, lined with unbleached linen, and sewn with a pocket. They are worn over a linen shirt and under the British red military coat. They were made by five university students in associate professor Marilyn Deighton's costume construction class as final projects at the end of the fall semester.

Old Fort Niagara's field music practices and performs military music of the fifes and drums from the 18th and 19th centuries for parades and the site's daily and special programming. More information is available the corps' Facebook page, "Old Fort Niagara Field Musick."

Old Fort Niagara (www.oldfortniagara.org) is located in Fort Niagara State Park in Youngstown. The fort is open daily from 9 a.m. to 5 p.m. and admissions end 30 minutes before closing.