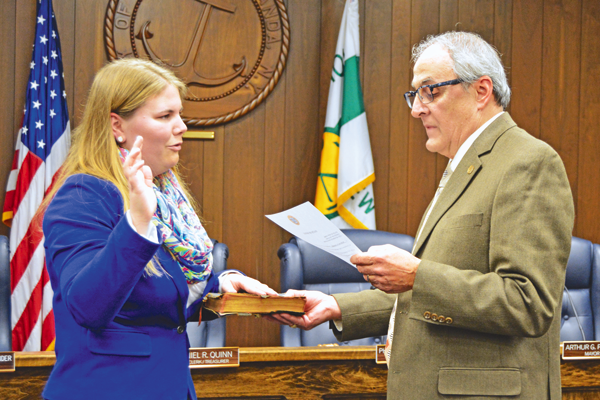 Mayor Arthur G. Pappas appointed Alexander, and spoke about why she was the best candidate for the position.

"Her work ethic is unquestionable," he said. "That alone would make the case for her appointment."

Pappas also said that, in November's election, voters "overwhelmingly" chose to keep her in office as city attorney. He said she has knowledge and understanding of the past and current administration.

"There have been several changes in the past couple years here in City Hall and Katie (Alexander) has been a part of the process and she is ... very familiar with what legal ties the city's involved with right now," Pappas said. "And to make a change and to bring somebody new in at this time, I think would not be in the best interest of the city."

After the reorganization meeting, Alexander was sworn into her new position, which became available after the advancement of her predecessor, Shawn P. Nickerson, to full-time City Court judge.

In her closing statements, Alexander thanked Pappas and the Common Council members, who unanimously voted in favor of her assuming the City Court judge position.

A lifelong North Tonawanda resident, Alexander said, "I love North Tonawanda. I grew up here; my whole family's here. I really believe in this city, and to reside over the court is not just an opportunity, but a real privilege. And it is something that I will work every single day to deserve and to show to the residents that it was the right decision."

She also said, "I plan to be accessible. I want to make our court system work for all citizens and I want to make it a place that protects the law-abiding and corrects those who are outside the law in a way that benefits all parties."

Zadzilka said he was "deeply humbled" by the nomination.

Moving forward, Zadzilka said, "I want to do some direct, decisive leadership." He said he plans to focus on the city's development and infrastructure repairs.