'Everyone deserves to be heard'

Gentile has been an employee of the school district since 2004 and, since 2013, has been in a clerical position at the middle school. Gentile has always had a passion for theater. She attends all the productions and many of the rehearsals.

"Last year I noticed that we had a drama play, and it was a wonderful play; they put a lot of effort into it, (but) I found that you couldn't hear the students speak," she said. "All their hard work and all the words and jokes were half caught, because you couldn't hear them. A lot of sixth- and seventh-graders don't talk loud. It was a wonderful play when you were close, but otherwise it was all lost."

When the Alumni Association offered mini grant applications, Gentile decided she would fill one out, along with Jacey Diez, a drama and musical director for the middle school program and current Niagara University student.

"The mini grant was only for teachers, but I'll see if I can get it," Gentile said at the time.

She requested a grant to purchase wireless microphones for use in the middle school theater productions. "I had to search the internet to find the best price of microphone I could get," Gentile said. "Then I filled out the form to say why I was deserving of the grant. I feel that music and their (the students in the drama department) hard work needs recognition, and if you can't hear what they are saying everything's lost."

She got the application signed by middle school Principal Dr. Dean Ramirez, who said he thought it was a great idea, and sent the application in. Gentile then received a letter from the Alumni Association telling her that the application was approved. She would receive $500, the largest amount that was awarded, to buy wireless microphones.

Alumni Association members Nancy Orsi and Bruce Newton presented a check for $4,222 to Superintendent Paul Casseri and Board President Jodee Riordan, which represented 10 awards throughout the four school buildings in the district. When receiving the award, Casseri said, "For the past nine years the Alumni Association has been supporting Lewiston-Porter students though both scholarships and the teacher mini grant program.

The mini grant funds are traditionally awarded to teachers each year who request funds to enhance or supplement their resources or equipment in areas that aren't covered by the district budget. However, this year it also included the award to Gentile. 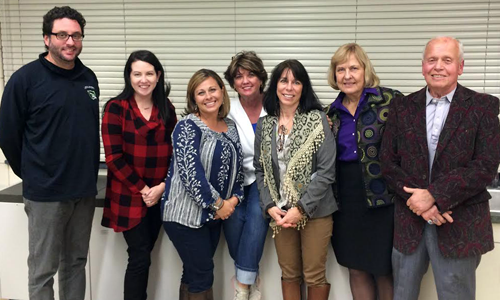 Susan Gentile stands with Lewiston Porter teachers who have also received a grant.

Even with the award, Gentile soon discovered a problem. The $500 grant was not enough to buy two microphones. Therefore, her plan is to help the middle school students organize a fundraiser to raise an additional $100 to purchase a second wireless microphone. Gentile plans on leading the students in a bake sale, hopefully to catch the eye of hungry students at the end of the day.

"The middle school drama students work and prepare just as hard as any athlete or academic student. There are a lot of hours in rehearsal, singing and prep work and scenery-making that these kids do by themselves. The adults don't do it; the kids do it," Gentile said. "I've seen it first-hand and, because of my son, I see what happens when practice is over. The excitement, the worry, the doubt. The last thing these kids should worry about is not being heard."

Gentile said she hopes the purchase of two microphones is just the beginning of being able to support the middle school theater productions. She said these activities are an important part of this group of students' educational experience.

From a personal standpoint, Gentile said she is proud to have received the mini grant on behalf of the middle school students. She said, "I'm most proud of believing in myself that I can do this sort of thing, because a clerical person has never applied for something like this. I'm thankful I have co-workers that listen and respect me just as much as anyone else." 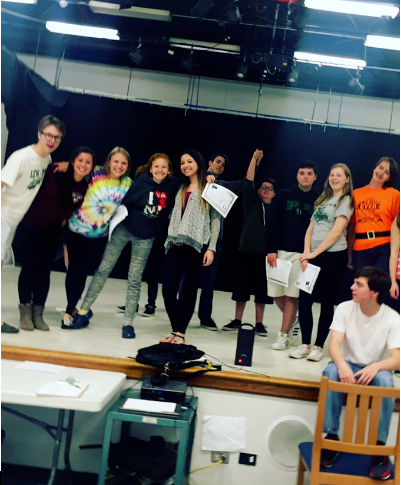 Lew-Port drama students pause to take a quick picture together.